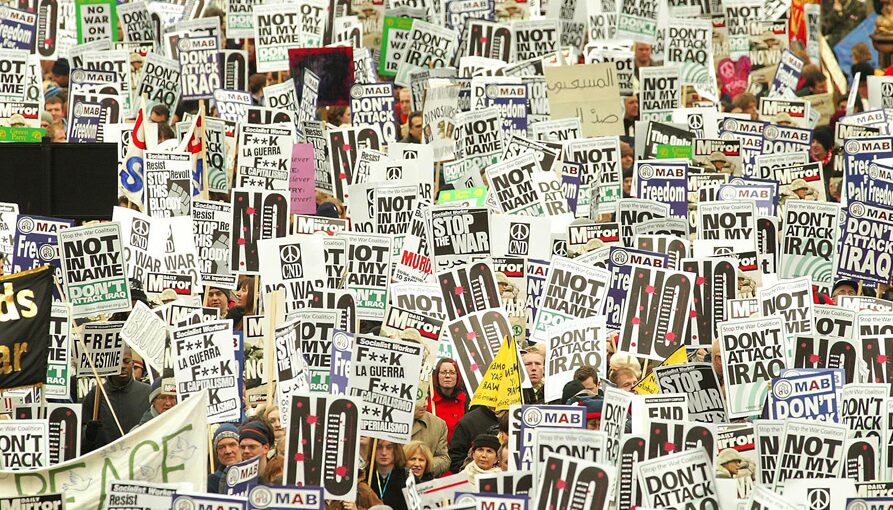 We are going to share today is what national day?  Two years after UN Secretary-General Kofi Annan described the illegal invasion of Iraq, a global day of action against the occupation war still raging in Iraq took place on 19 March 2005.

The invasion under the false pretext of weapons of mass destruction has been followed by other lies and other violations of international law. Indeed, under the guise of wanting to liberate the Iraqi people and then wanting to re-establish their security, more than 100,000 civilians were killed, whole cities were ransacked, thousands of people arbitrarily imprisoned and often tortured. Under the pretext of putting Iraq back on the road to prosperity, US viceroy Paul Bremer, along with the ‘interim’ and then ‘interim’ governments appointed by him, illegally wished to massively privatize the Iraqi economy to bring it into line with their neoliberal creed; the unemployment rate is now over 60%, acute malnutrition among children more than doubled, drinking water and electricity are no more available than in the aftermath of the invasion. In the name of rebuilding, the US invaders have awarded themselves tremendous contracts, often without tenders and Iraqi funds have been squandered without controls.

All this amply demonstrates that the intervention of the United States and its allies in Iraq is part of logic of domination, not liberation. Under these conditions, Canada should in no way contribute to the training of Iraqi military or police forces.

The United States proclaims that Iraq is the main front in the “war on terror”. On our side, we oppose this so-called “war on terror”, the militarism and the police state in which this orientation leads us.

In accordance with international law, we demand that Canada condemn all wars of occupation (eg, Iraq, Palestine), reject any notion of “preventive war” and refuse to participate in military missions that arise. Concretely, as Canada prepares to increase the number of Canadian troops in Afghanistan and to deploy combat units in the Kandahar region, we are demanding their immediate withdrawal.

We also call for Canada to revoke all laws and abolish all judicial proceedings that violate fundamental human rights norms and standards. In particular, we are calling for the withdrawal of Bill C-36 and the abolition of security certificates.

Finally, we call for the additional $ 13 billion, announced for military and “safe” spending in the last Canadian budget, to be spent on developing a more equitable society, here and elsewhere, the only real guarantee of security. all.