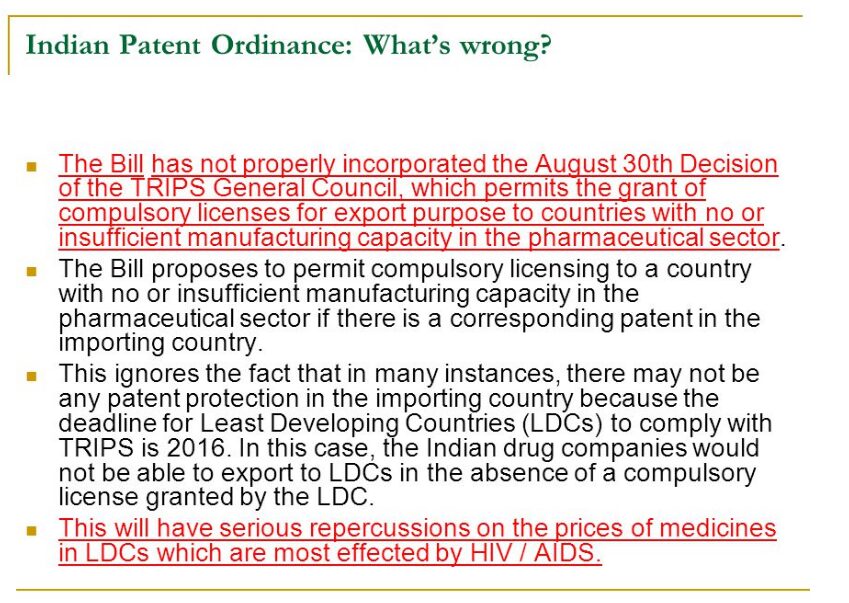 Today we will tell you today is national what day.  On 26 December 2004, the Government of India issued an Ordinance amending the Patents Act of 1970 in India.  And World Day of Action against the Patents Ordinance is celebrated in its remembrance.  The clauses of the Patent Ordinance constitute a serious threat to access to medicines in India and the world and undermine the fundamental right of peoples to life and health.

Indian pharmaceutical companies that produce generics have made access to treatment much easier by lowering drug prices by almost 100%. At present, Indian generic producers export their generics to many poor countries.

New treatments that is economically inaccessible?

For those HIV-infected people whose current treatment has become ineffective, access to newer “second line” antiretroviral is more critical. This patent order will not permit the generic production of many of these new drugs. For example, the cancer drug, Gleevec, costs $ 3,000 a month, while the generic copy of the same medicine is available for $ 300 per month in India. An exclusive marketing right granted to Novartis, the manufacturer of Gleevec, is already threatening access to generic medicines.

The Patent Ordinance imposes on India a level of intellectual property protection “TRIPS +” that goes far beyond the commitments made under the WTO TRIPS Agreement. Moreover, it also reduces all the possibilities offered by the TRIPS Agreement, and reiterated in the Doha Declaration, to ensure access to medicines for the populations of India and other developing countries.

We believe it is India’s duty to shift public health concerns and access to medicines before the commercial interests of pharmaceutical companies.

All organizations that defend the public interest are very concerned that the order will deprive India of the right to protect public health, including the existence of cheap, generic medicines. In other words, to accept this Ordinance is to lose the right to use the rare exceptions clauses available in the TRIPS Agreement to protect health.


Given the situation, public interest organizations and trade unions organized a mass demonstration on 26 February 2005 against the Patent Ordinance.

We call on all groups in the world who share these concerns to a global day of action on February 26 [2005] to demand access to generic drugs in India and around the world. In the past, such actions have led to important victories and forced pharmaceutical companies to abandon trials brought against the South African government (March 2001), forcing the United States to stop using and WTO Dispute Settlement Body in their Conflict with Brazil (June 2001). We hope once again that popular unity will prevail over the power of multinational enterprises.

Groups and men with a strong public interest around the world must demonstrate against the Patent Ordinance by organizing rallies, parades and demonstrations. Organizations can also formally convey the expression of their protest to the embassies and consulates of India.