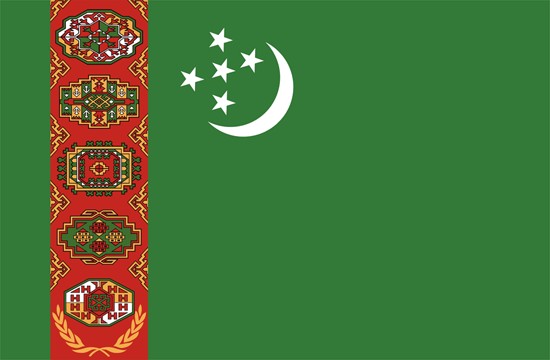 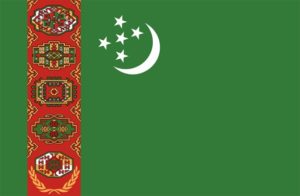 The national flag of Turkmenistan was adopted on January 25, 2001. It is considered one of the most complicated flags. The base of the national flag of Turkmenistan consists of a dark green band with five white five-pointed stars and the symbol of a white crescent in the upper middle. The left side of the flag contains a vertical strip with the symbol of the so-called Gulus – patterns used for the manufacture of carpets. Turkmenistan is a recognized producer of carpets and that is why this pattern is used. Under the Gulus are placed branches of crossed olive trees, which signify the peace of the United Nations. Five Gulus and five stars represent the five great Turkic tribes and the five provinces of the country. At the same time, the stars, along with the crescent and the green color are traditional symbols of Islam.

In the national flag of Turkmenistan the green and red colors appear on this flag because they have been historically venerated by the Turkmen. The crescent moon symbolizes the country’s hope for a bright future and stars represent the five provinces of Turkmenistan (Ahal, Balkans, Dashhowuz, Lebap and Mary). The five traditional carpet designs along the red strip represent the five main Turkic tribes in traditional order (as well as from top to bottom) are Teke, Yomut, Saryk, Chowdur, , And Arsary (Ersary). Olive branches were added at the last moment to represent the “condition of permanent neutrality”, 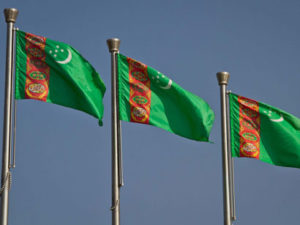 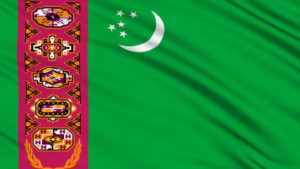