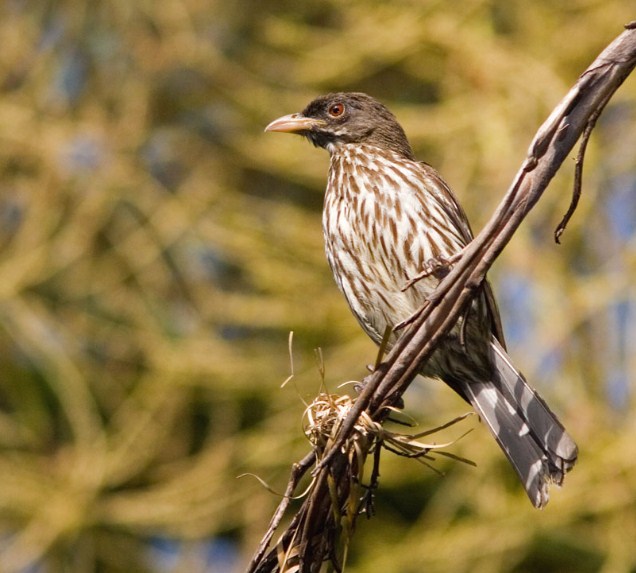 The national bird of Dominican Republic is Palmchat. It is a small species about 20 cm long. It is thought to be related to the Bombycillidae family and is sometimes included in that group. It is present in island of the Spanish area (where Haiti and the Dominican Republic) and other cays and small islands.

National bird of Dominican Republic build large communal nests of branches, mainly in royal palms (Royston sp.) And feed on the fruit of the palm, flowers, berries and other fruits. They live in lowlands at medium elevations where palm savannas or other open areas with scattered trees are found, but they also adapt well to parks and city gardens. They resemble in the structure the oropendolas, with the brownish back and the buried belly, thickly striped of chestnut.

Gonzalo Fernandez of Oviedo, is first naturalists to describe this species, compared their nests with those of the European stork. The name of national bird of Dominican is PalmChat in English and Oiseau or Esclave Palmiste in French alludes to the fact that it nests in Palmas Realest.

Do you know Mute Swan is the national bird of Denmark ?

If there are no palms available, such as in the mountains and in urban areas, they build their nests on other trees and even on electric poles.

Why Palmchat is national Bird of Dominican Republic?

It is the national bird of the Dominican Republic declared on January 14, 1987. The reason is to look for it in its taxonomic singularity and in the complexity of its reproductive behavior.

It is an enigma for scientists how such a unique bird exists on the island of Hispaniola. In the Museum of Natural History of Washington there is an exclusive diorama for the Cigua Palmera. Genetic studies suggest a possible relationship between Dulidae and Bombicillidae, a family from North America and Europe, which only deepens the mystery. For if the origin of the family is North America, why does it not exist in Cuba or in the Bahamas, which are closer to the Continent?

The Palmchat is a little smaller than a nightingale. The back is olive-brown with some green on the wings. The anterior part is yellowish white with brown vertical stripe. The eyes are red. Her behavior is very active and she is an excellent huntress in flight. They build a huge communal nest, in which each family has its own “apartment”, with an independent exit to the outside, which guarantees privacy to each couple.


They always nest on palms that are not in contact with any other tree, which prevents rats, snakes and humans from climbing into the nest. They put 3 to 4 eggs with dark spots. As the eggs of the birds that nest in closed places like the parrots are white, because in a dark nest they do not have to camouflage them, perhaps this type of nest is a recent evolutionary adaptation in this species. Both male and female feed the chicks and clean the nest. It is impossible, at first glance, to distinguish the male from the female. They feed on fruits, petals, insects and lizards. They are natural refreshers, as they disperse the seeds of the fruits they eat.

The Palmchat is not in danger of extinction, since it is abundant throughout the country, except for high areas and very dense forests. The protection offered by their nests against predators, their adaptation to urban environments and the variety of food they eat is the cause of this success. 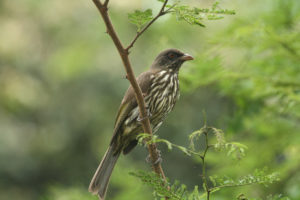 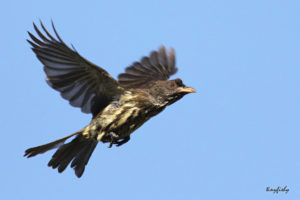