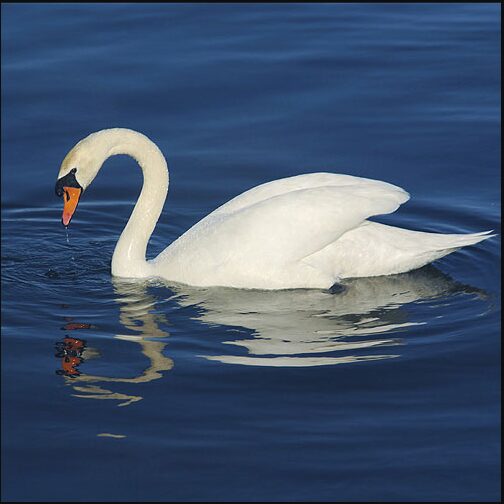 In Denmark they call it the Common Swan. It is known that since the XXIII century already in Great Britain there were populations of this swan in a partially domesticated state. Shortly thereafter it was introduced in France and other parts of Europe where it was established. A bird so elegant for many years had great welcome in the beautiful ponds of the monarchies. But there were also times of scarcity, and the swan eventually disappeared from the gardens and all around. It has been reintroduced again, and is once again the common swan of Europe.

By the color of its plumage, as it is to be expected, also is known by White Swan. It is not the only white swan that exists; there are four other white swans that inhabit the Northern Hemisphere. Of course, if we include Coscoroba, which has mostly white plumage, then there are six white swans in total. However, among the swans in ponds and fountains, this is the white swan we see.

The popularity of this national bird of Denmark Mute Swan has been such that it is a little difficult to differentiate between wild, introduced and escaped populations. At least partly wild are those that nest in northeastern Europe; In the British Isles, southern Sweden, Denmark, Holland, northern France, northern Germany, Poland, in the countries south of the Baltic Sea and the Black Sea. In Asia the same problem is presented and although with a great deal of reserve, they are considered as natural or wild to those who nest in the Caspian Sea, continuing eastward irregularly from southern Siberia to Lake Baikal and those nesting in northern Mongolia .

During the winter part of the northern populations move south; although many are sedentary and stay year-round in the nesting area, they only move to the coasts. Those who migrate from the interior of Europe meet with populations in the Black Sea and the Caspian Sea. In Asia winters on the coast of the Yellow Sea and the Korean peninsula. Some of the young people of the year remain in the winter areas until the next year when they return with the adults to the regions where they raise.

In North America there are at least two robust populations in the northeastern states of the United States, occasionally being seen some of these in southern Canada. Both populations have been increasing their numbers until reaching thousands of swans. The populations of Australia and New Zealand remain stable, without increasing or decreasing significantly. Those in Japan (estimated at about 150) are stable. The natural population to the north of Asia and Europe appears to be growing, it is estimated that already exceeds half a million of them.

This swan prefers lakes and rivers of low flow with banks where tall grasses grow. During the winter it is seen in estuaries of brackish water in the vicinity of the sea, on the shores that offer some protection and in marine waters if the coast does not offer protection; As well as when the coast is frozen.

It is estimated, that usually, once the pair is formed, it stays together for the rest of the life. If one of the two dies, it is very likely that the survivor will re-pair. There are also “divorces” when the couple fails to raise, according to studies 3% of couples are separated. There are documentation of some males that have bred with more than one female at a time; Polygamous

Usually this swan nests once a year. In captivity some couples have returned to nest in the same season and in their natural state is known of at least one case.

The Vulgar Swan nesting season begins during the boreal spring; In March or April. The couple selects an area on the shore of a lake or river; The male ferociously defends this area against all visitors, Including the pigeons of the previous year’s couple. According to Sandars (1947) “he can kill a dog and attack people and boats with people.” First he chases and pecks the intruder until he catches the message, but, the vulgar swan rises up and ends drowning under his weight. In captivity we know of a couple that every time they go to raise they own a pond, the size of a lagoon, and the swan intimidates all the other anátidos to leave that pond, arriving once to drown a coscoroba that does not He she left. The size of this territory varies according to the locality. It is very natural for a couple to use the same nesting site for several years.

The national bird of Denmark nest is built on land, usually near water, or on floating islands. As material they use herbs and branches of small thickness, which the female places to his liking. The structure can have a diameter of two meters.

The clutch may be one to twelve clear greenish-blue eggs, although usually a number between these two being the average in many studies of five to seven. Eggs in the same clutch may vary in size. In one study the difference between the largest and smallest egg was 32%; The first egg being the smallest and the second the smallest. Once the laying begins, the eggs are put in intervals of 36 to 48 hours.

Do you know Cuban Trogon is national bird of Cuba ?

The incubation takes from 35 to 38 days, has been documented up to 41 days. It is usually done by the female, although some males have been seen replacing their mate. The pigeons are jealously cared for by both parents. When they are small they are raised on the backs of the parents, which is a common behavior among some of the swans and other water birds. When they are born they have white plumage, then they acquire a light brown color. After two months they can fly. They stay with the parents for four or five months; In many cases until the beginning of the next breeding season.

In some places, two-year-old females are matched and raised with older males. Usually males do not begin to breed until they are three years old. As expected, some individuals do not raise until they are much older. The average first time they raise is four (England) or five (Ireland) years.

Some data based on an eight-year study in the state of Connecticut, United States,

Please refer to Conover and Kania, 1999, if you need more information: Initial clutch size: six to seven eggs (average of 6.6).

Pigeons that were born: four to five per clutch (average of 4.5).

Pigeons that flew: three to four per clutch (average of 3.2).

During most of the year the basic food of this swan consists of aquatic plants that obtain from the bottom of the pond. Introduce the long neck, keeping the body afloat (not submerged), and with the beak bites the leaves and stems of aquatic plants. This diet is supplemented with insects and some frogs that manage to catch. In some places in winter and spring, usually beginning in December, visit the fields of seed where it feeds on seeds.

This swan is the second largest; The Trompetero Swan is a little larger in size. Mambs of the Vulgar Swan, which are slightly larger than the females, achieve an average extension in the wings of 2.4 meters.

Both genders look the same. Once adults, the plumage of this swan is all white. The beak is yellow to orange to red. The black caruncle on the bill usually develops more in the male, but this is not a sure indication to determine the genera. The legs are short in proportion to the body and dark gray.

Some data based on those who live in nature (domesticated or on farms may exceed some of these figures):

Average length of about 1.52 meters;

Common causes of mortality include: oil pollution, lead poisoning, car wreckage, parasites, fishing hooks and Nile, dogs, foxes and illicit hunters. In males territorial defense is also responsible for many casualties. Even so, the major cause of mortality of the Vulcan Swan, under normal circumstances, takes more lives than all other causes together, is the collision with permanent obstacles (towers, power lines, bridges, etc.) during the flight.

In English it is called “Mute Swan” and “White Swan”. 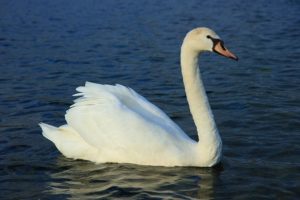 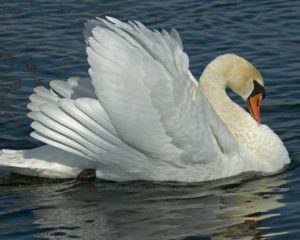 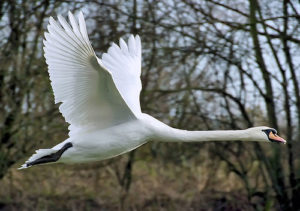