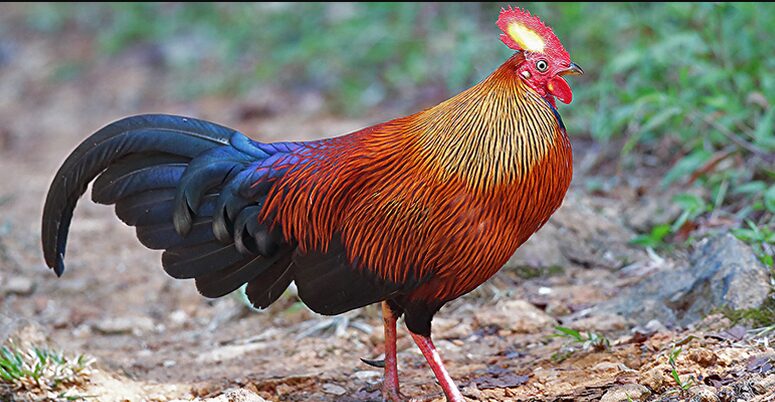 The national bird of Srilanka is Ceylon Jungle fowl, the Wali Kukula, has a long history of freedom. In ancient times, when foreign traders flocked to the land mesmerised by its spices and precious stones, it is said that one among them spotted an opportunity in a flock of beautiful fowl scuttling about the forest underbrush. The national bird of Srilanka is Ceylon Jungle fowl after haggling with a local from a nearby village, he parted with goods for what he thought would be yet another treasure he could take back home from this paradise island, a flock  of magnificent fowl. The villager left  and the trader rushed off towards his bounty, which took flight in an instant and disappeared high into the trees.  The man left empty handed. The story lived on to be narrated to this date.

The national bird of Srilanka is Ceylon Jungle fowl born free and roaming free in scrub jungles of primarily the central, southern and eastern parts the island, the Ceylon Junglefowl (Gallus lafayettii), commonly known as Wali Kukula in Sinhalese, has a reputation for resilience. The island is a veritable birds’ paradise, with about 492 recorded bird species. One of the four species of bird in the genus Gallus – the other three being the Grey Junglefowl (Gallus sonneratii), the Green Junglefowl (Gallus varius) and the Red Junglefowl (Gallus gallus) – the Sri Lankan Junglefowl is one of 23 bird species endemic to the country. The strong survival instinct associated with this remarkable fowl has kept it alive and free even today, and brought it fame and immortality as the country’s national bird and the subject of a postage stamp.

The diminutive female in particular, commonly called the Wali Kikili (wali meaning forest and kikili meaning hen in Sinhalese), is wired for survival. Her speckled brown, black and white feathers provide chameleon-like cover among the dead leaves and forest undergrowth that is her home. When startled, she takes flight faster than her mate, heading high into the trees well out of harm’s way. She has been spotted at heights of 30 feet above ground.

If the Wali Kikili takes the prize for speed, her mate gets the prize for  good looks. The genders of this species are polar opposites in appearance.  The female’s mousy browns are no match for the male’s mantle of gleaming brown, indigo, black, golden and coppery hues. It’s a strikingly handsome fellow with a proud red face, penetrating pale eyes, a split red comb marked by a large orange-yellow beauty spot and a generous wattle, and formidable and dangerous spurs. It struts around, head held regally high, occasionally flapping its wings and calling out not in the familiar crow of its domesticated cousin, but a “ko-ko chow”. Like the domestic fowl, it heralds dawn with several calls from the treetops before flying to the ground to forage for food.

Do you know imperial eagle is the national bird of Spain?

Ceylon Junglefowl wanders close to human habitats but never too close to people. More courageous on its own turf in the forest, it may forage for grain, seeds, berries, buds, leaves and insects in full view of human spectators. Niloo flowers and berries, a species of Strobilanthes, are said to be a gastronomic favourite of these birds, causing them to migrate to the central hill country where the shrub thrives, during the Niloo blossom season. It is said that the berries inebriate the birds, temporarily pacifying their customary caution, leaving them languid and dull. There is no botanical evidence that the plant contains intoxicants and the Sinhalese believe that Niloo seeds temporarily blind the birds.


The Wali Kikili is a good mother and plays the role of both parents because her mate leaves her to raise the family alone. She carefully chooses a nesting site in the ground at the foot of a tree or near a log or above ground in a secure tangle of vines, builds her nest, and lays about two to four brown speckled  eggs, guarding them vigilantly.  Like their mum, the chicks know what’s best for them, and forage no sooner they hatch, instinctively running for cover and freezing whenever mum sounds a warning of approaching danger. In a week, they are fully feathered and ready to fly high to snuggle close to her in the branches  at night.

Male Junglefowls are aggressive and often issue territorial challenges  to their rivals, usually a call preceded by three to six claps of its wings behind their back. Ornithologists note that  they become particularly combative  in the breeding season, usually in the first quarter of the year, and in August and September. Face to face confrontations during these times have been known to be vicious and bloody, but the birds appear smart enough to avoid such skirmishes. In general, one  of them beats a retreat before any blood is spilled.

However, such chest-beating has made the fowl vulnerable to man’s partiality for blood-sport, especially the British love of hunting. In “A History of the Birds of Ceylon”, Capt. W. Vincent Legge R. A. says shooting the Ceylon Junglefowl is particularly challenging, and describes the lengths he would go to, to trick the birds out of their cover. He writes that huntsmen, aware that the sound of flapping wings would attract the birds, would conceal themselves and make the sound of flapping wings, drawing the bird out of its cover and into firing range: “The natives make this sound by clapping against their thighs with the palm of the hand hollowed. Europeans can best do it by making a pad with a handkerchief and beating it against the palm of the other hand…”

And Sri Lanka’s love for cockfighting was notorious enough to be inscribed in rock in Thailand in 321 BC. It is possible that these proud birds were also used for the sport.

Today, bans on both game hunting in Sri Lanka and the domestication of the Ceylon Junglefowl as well as decreasing numbers of wild predators such as the wild cat have allowed the Wali Kukula to proliferate. So they roam wild and free, objects of national affection and admiration. A popular Sinhala New Year raban pade, a poem sung to the beat of a drum, celebrates their presence: 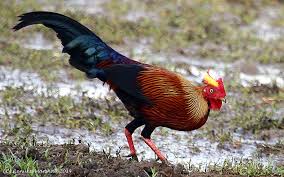 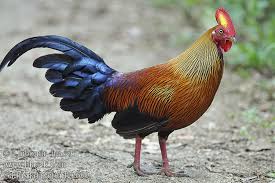 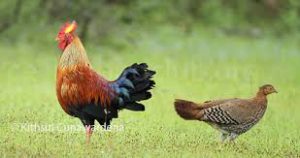