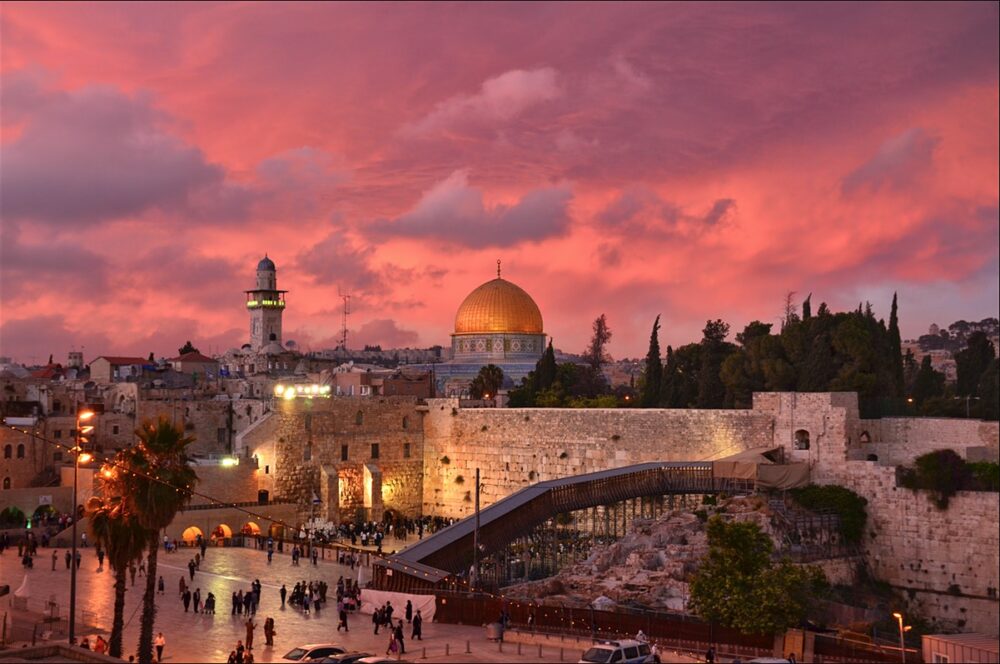 THE FUTURE OF JERUSALEM

The Capital city of Israel is Jerusalem. Today Jerusalem suffers from incessant violence and lives under the threat of open warfare. However, the Bible reveals that this historic city will soon be the capital of the world!

The Capital city of Israel is Jerusalem is the center of conflicts in the Middle East. Millions in the Arab world oppose Israel’s rule over this historic city. Muslims all over the world are waiting for the day when Jerusalem ceases to be under Israeli control. Will such a hope come true?

Iranian President Ahmadinejad has been supporting the Palestinian guerrilla Hamas and exhalted the group’s efforts to deprive Israel of control of Jerusalem: “The time is near for fulfilling the divine promise.” The Zionist regime is going through its worst phase and Palestinians must remain vigilant and support their legitimate government to prepare the ground for the liberation of holy Quds [Jerusalem] and their emancipation from the evil Zionist chains. “He also urged Hamas to persist in its efforts “to continue the resistance and drive the Zionist tyrants out of the holy ground of Palestine.” The resistance must continue until there is not a single glimmer of Palestinian soil “under Israeli control.

Other shrill voices have called for Israel to yield at least some control of Jerusalem. In 1980, when Israel declared Jerusalem its “indivisible and eternal capital,” the Vatican strongly opposed. In 1984, Pope John Paul II called for Jerusalem to have “special status, internationally guaranteed”. Benedict XVI later displeased many Israelis because he refused to condemn the Palestinian attacks on Israel, and when he pointed out that sometimes the Israeli response to such attacks had violated international law. In a message addressed to Catholics in Jerusalem, the patriarch of the Greek Orthodox Church, Michel Sabbah, criticized Israeli policy and called for an end to “the malevolent occupation, with all its oppression”; While denouncing “Israeli soldiers who, at any time,

To understand the future of Jerusalem, we must understand its past. With the fall of Rome, Jerusalem passed to the control of the Byzantine Empire, until the Muslim armies conquered the city in 638. In 1099, the first Crusade saw control of Jerusalem pass to the European invaders, who possessed it until 1187 when it was taken away by the Muslim general Saladin. The successor of Saladin, al-Khamil, had to hand over the city to Emperor Frederick II of the Holy Roman Empire in 1228. In 1244 the Ayyubid of Egypt seized it, and remained under Egyptian rule until 1516, when the host Ottoman Empire.

Do you know about the capital city of Ireland?

Can Israel and the Arab states find peace if Jerusalem remains a center of conflict? Will the city become the capital of a Palestinian state? Will it fall under international control? The Bible shows that the conflict over Jerusalem will be the central theme of events in the end times.

Today, Jerusalem is a city of many religions. A 2006 survey identified 1,200 synagogues, 150 churches and 70 mosques within its boundaries. The Jews look to Jerusalem as the city of the great prophets and the capital of the Kingdom of Israel and Judah under King David and his son, King Solomon. The first temple, as well as the second, was the center of Jewish worship in ancient Israel; Until the Romans destroyed the city in the year 70 of our era. Today the Jews worship at the Western wall, or wall of the Lamentations, which is for them the only element of the second temple that is still standing and to which they have access.

Jerusalem is, at the same time, the third holiest city in Islam, after Mecca and Medina. Today the mosque of Omar, also known as the dome of the Rock, rises above the Temple Mount. The Arabic term for the Temple Mount is al-Haram as-Sharif, meaning “the Noble Sanctuary.” Muslims believe that from there Mohammed ascended to Heaven.

What does Bible prophecy reveal about the future of Jerusalem? Finally, this ancient city will become the capital of the world. But before, it will be the scene of dramatic military movements. The time will come, near the end of this age, when enemy forces will invade the Holy Land and surround the city of Jerusalem. Jesus Christ himself warned: “When you see Jerusalem surrounded by armies, know that its destruction has come” (Luke 21:20).

It will not be any army of the Middle East, but the prophecy indicates that they will be armies of the Gentiles. Jesus went on to say, “These are days of retribution, that all things which are written may be fulfilled: but woe to them that are with child, and to them that give suck in those days: for there shall be a great calamity upon the earth, and wrath upon And they shall fall by the sword, and shall be carried captive unto all nations: and Jerusalem shall be trodden down by the Gentiles, until the times of the Gentiles shall be fulfilled “(vs. 22-24). Notice the parallel accounts in Matthew 24 and Mark 13. As you read, see that the destruction of Jerusalem in the year 70 was a prophetic anticipation of the devastation described in these prophecies for the time of the end. 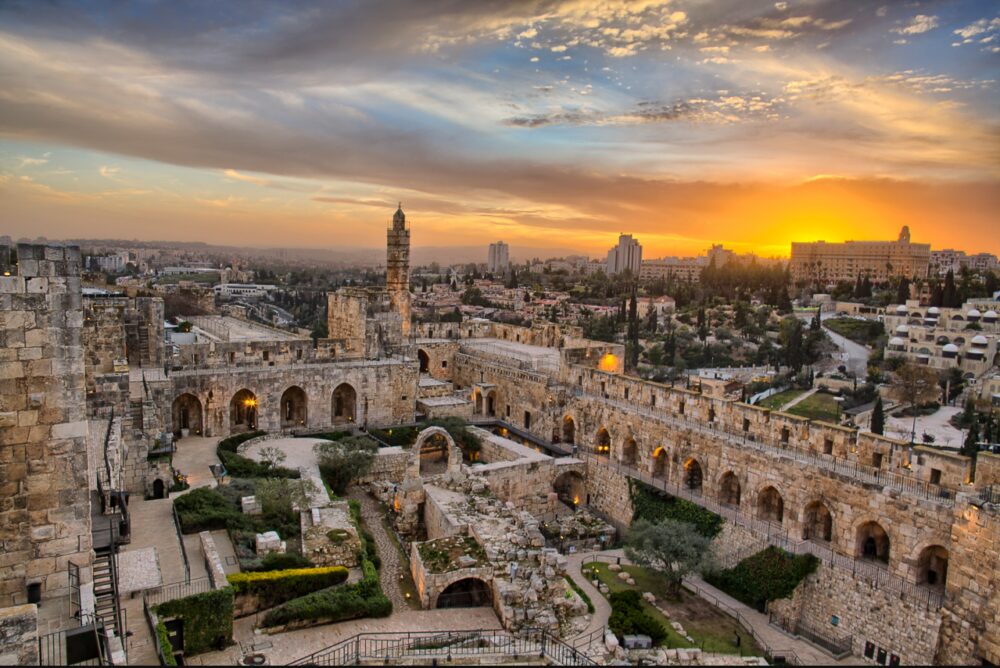 Jerusalem, then, will fall again under the control of the Gentiles. How long will the Gentile domain last? The answer is in the book of Revelation, which confirms that at the end of this age, Israel will lose Jerusalem. The apostle John wrote: “And there was given me a reed like a measuring rod, and it was said unto me, Arise, and measure the temple of God, and the altar, and them that worship in it: Of the temple, leave it aside, and do not measure it, for it has been given to the Gentiles, and they will tread the holy city forty-two months “(Revelation 11: 1-2).

Indeed, Jerusalem will remain under the dominion of the Gentile 42 months toward the end of the age. As you read the book of Revelation, you will see that the three and a half year period precedes the return of Christ. Two prophets of God will give a powerful testimony in that same span of three and a half years (Revelation 11: 3-15). These two

A WORLD GOVERNMENT OF PEACE!

A mountain is a biblical symbol representing a kingdom or government. Isaiah clearly states that the Kingdom of the Eternal is to be established in Jerusalem. All nations will submit to the new world government. It will not be a government in the hands of selfish human beings. The new government will be a divine Kingdom with dominion over the whole world: the

God’s Kingdom. It will be ruled by the Messiah, the King of kings, and the same Jesus Christ! This is wonderful news that we all long to see come true. Be aware of that time of world peace. Look forward to the arrival of that Kingdom! Pray for that Kingdom to come, as we learned to pray in Matthew 6:10! 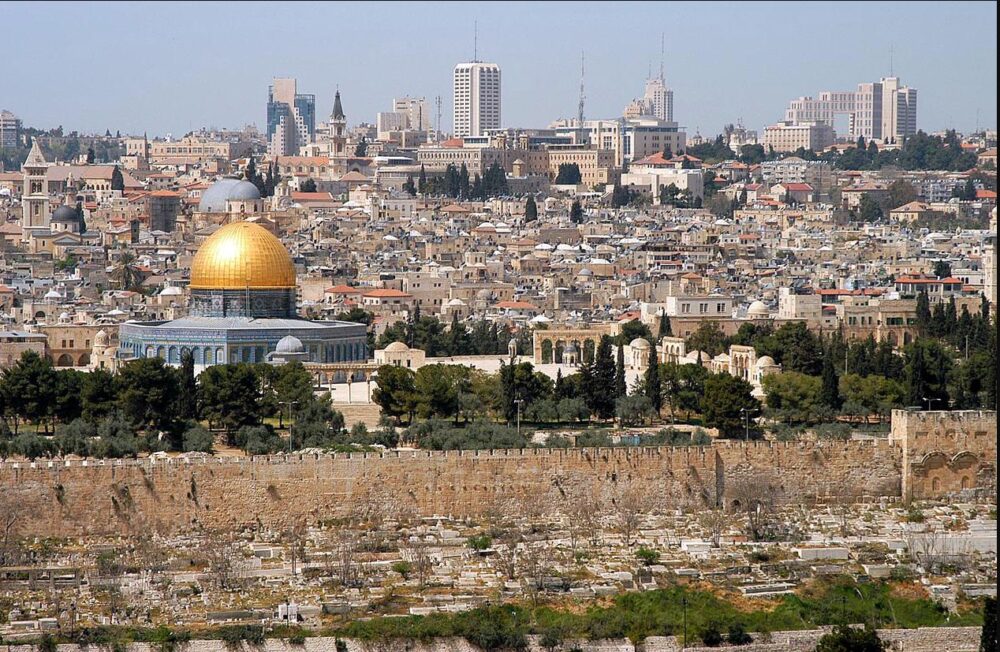 This is the beautiful description of what life will be in Jerusalem: “Thus smith the Lord: I have restored Zion, and I will dwell in the midst of Jerusalem: and Jerusalem shall be called the City of Truth, and the mount of the Eternal of the Armies, Mount of Holiness, Thus saith the Lord of hosts: Elders and elders shall dwell in the streets of Jerusalem, every man with a staff in his hand for the multitude of days: and the streets of the city shall be full Of boys and girls who will play in them “(Zechariah 8: 3-5 ).

The city of Jerusalem will finally be worthy of its name: “City of Peace”, because in it will live no less than the Messiah, Jesus Christ. Only then will we begin to live peace in the whole world.

Jerusalem will be the capital of planet Earth. You may also be a participant in the glorious Kingdom that will govern from that capital city. The world of tomorrow will be here sooner than you think. As world events are moving toward this extraordinary outcome, let us not fail to observe world news in the light of biblical prophecies!