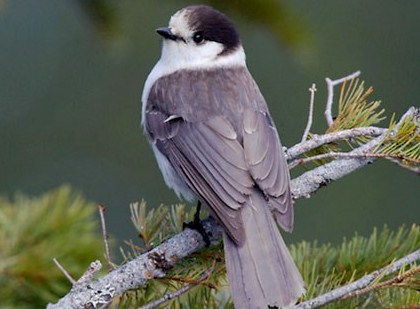 The national bird of Canada is Gray Jay. The Gray Jay, whose natural habitat is the forest, is an intelligent bird with great adaptability. Its noisy presence is very common in many bird feeders in North America. The “yeah! Yei! “Is just one of the many voices emitted by the Gray jay, including excellent imitations of various hawk calls?

The Royal Canadian Geographical Society announced this week that the gray jay , known in Spanish as the gray jay , would be the ideal candidate to become a symbol of Canada, at the same level as, for example, the beaver.

The arguments of the experts are logical: the gray jay is a bird that is found in the north, but it is present in all the provinces and territories of the country , but it is not common in any other part of the planet, except in some regions of the Northwest of the United States, where a species of this type is found.

The indigenous communities described it as ” wisakedjak ” and have been part of the story forever. It is also described as “intelligent and friendly” .

The Royal Canadian Geographical Society came to this conclusion after two years of research , analyzing several species and defining which would represent the country in the best way.

But this conclusion was not only the whim of the experts. More than 50,000 votes were received in a platform created for this occasion , in which the gray jay was in the third place.

After this and the discussion of the professionals decided to give the support to this small bird of which many Canadians had no knowledge.

Among social networking users and other experts, opinions are divided over this new candidate to represent Canada.

Do You know Giant Ibis is the national bird of Cambodia

Many saw the loon ( the one in our coins) , or the snowy owl as the logical candidates. Even the Canadian goose seemed to have more popularity among people.

However, the Canadian Geographical Society defended its candidate , noting that it was not just a popularity contest, but to analyze a bird that best represents the country.

Equally nothing is defined. The Federal Government has not said whether it intends to introduce a law to declare the gray jay as its national bird (Canada currently does not have this figure), but for scientists the 150th anniversary of the Confederation in 2017 would be the perfect context for Make the announcement

Sometimes the Gray jay eats eggs and chicks, which has earned him his bad reputation. Actually, their diet is mostly vegetarian. They mainly feed on acorns, nuts and seeds, but also eat small creatures, such as caterpillars, grasshoppers and beetles. Sometimes the Gray jays store acorns on the ground and then do not come back for them, thus helping the expansion of the forests.

Highly present in much of eastern and central North America, the Gray jay is gradually expanding northwest. They are quite social, and often form couples, family groups or small flocks. Many birds of the north go south to spend the summer, meeting in large flocks of up to 250 individuals to realize this long passage. However, this migration has some mystery to scientists. Throughout the territory of the Gray jay, some birds stay during the winter, while there are individuals who migrate one year, but do not do the following. It is unclear what factors determine whether a Gray jay or a family decides to migrate. 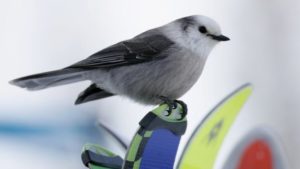 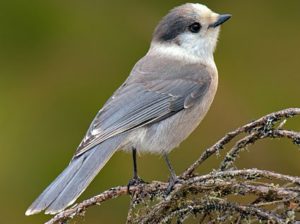 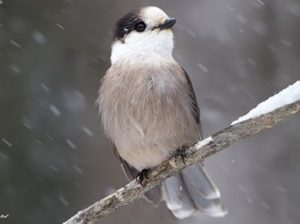