The capital city of Denmark is Copenhagen which is located on the island of Zealand, the largest island in Denmark , in the Baltic Sea and northern Germany, hence its great commercial tradition.

Copenhagen is the capital of Denmark and has more than 500,000 inhabitants enjoying one of the hubs for business throughout Scandinavia.

Do You Know Nicosia is the capital city of Cyprus ? 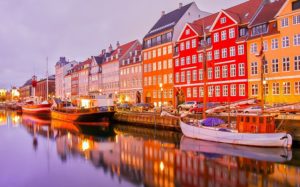 The Modern Opera of Copenhagen, inaugurated in 2005.

The Free City of Christiania, hippie neighborhood in Copenhagen.

The Church of Our Savior, (Vor Frelsers Kirk).

Copenhagen’s gastronomy is linked to the sea, its fish and seafood, One can choose between enjoying a snack in the city’s port or try one of its sophisticated restaurants, as Copenhagen has 11 establishments awarded Michelin stars.

Denmark has an efficient network of air and land communications, once in Copenhagen easy to move within the city to enjoy all the charms offered by the capital of Denmark.

The best way to get from Copenhagen Airport to the city, known as Copenhagen-Kastrup, is by train from the underground station of Terminal 3 or by subway from the newly opened Lufthavnen station which connects with the center of Copenhagen .

Copenhagen is not too big a city and can easily be discovered on foot, so it is recommended to wear comfortable shoes to walk around its streets. In any case, Copenhagen has had a metro since 2002, is well connected with its suburban network known as S-Tog and its characteristic yellow city buses.

The capital city of Denmark officially has more bicycles than cars circulating in its streets. This achievement is credited to great governmental efforts to encourage the population to mobilize by bicycle.

Manual traffic counts have been a feature of the city since 1970 – when there were many more cars than bicycles on the streets – and have registered, for the first time, more bicycles than cars that are used in most of the Areas of the city.

“It shows that the investments we’ve made work,” Copenhagen Mayor Morten Kabell told Danish newspaper Politiken. “But it is clear that this is a challenge for the ability of cycling tracks, which should be able to cope with the volume of traffic.”

The city is considered by many as a model of integrated transport and was voted last year the best city for cyclists and the most livable city in the world , according to its website.w

The government has invested more than 1 billion crowns (almost $ 200 billion) in its Cyclist City project , as well as prioritizing bicycle routes in parking spaces and introducing initiatives such as car- free days.