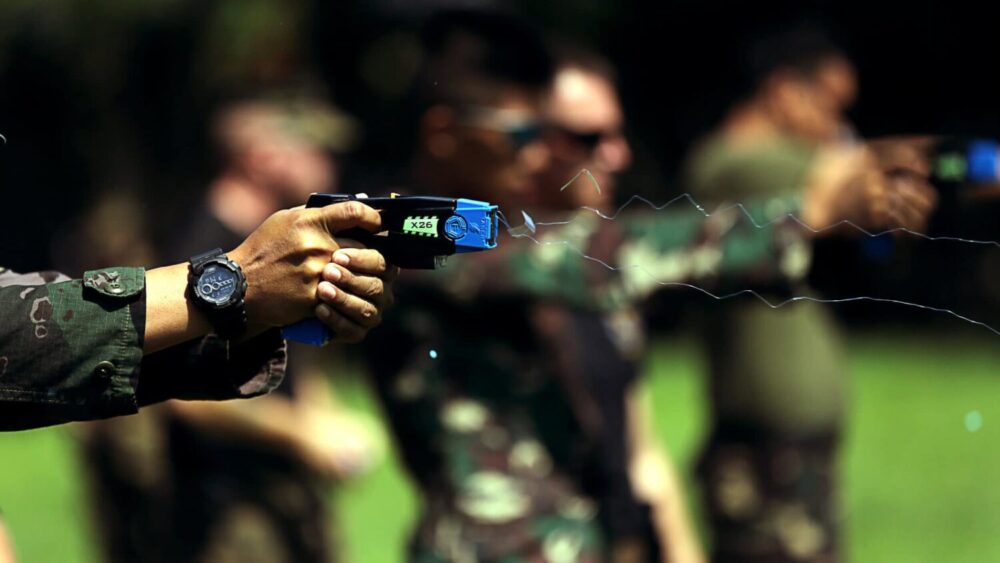 Tasers and stun guns are frequently mentioned in news and blogs whenever you read about self defense. Many people tend to confuse the two and think that they are the same devices. But, they are totally two different devices used in totally different manners. The tactical distinction between stun weapons and tasers is the range or distance they can tackle. It totally depends on whether you want to attack the assailant from a distance or use the device as a self defense when the attacker is up close.

What distance you want between you and the attacker when in need for self defense, is the factor that decides which among the two devices you should have. But there are other variations as well. Read more mentioned below.

How Are Tasers And Stun Guns Used? You must first understand how they function and what they perform to decide which to utilize or purchase.

Functioning Of A Stun Gun

Small and portable stun guns can fit in a bag, pocket, or handbag. They can appear to be a cell phone, a lipstick, or a flashlight.

The primary principle of this gun is the internal activation of a number of tiny prongs. The prongs convey voltage to the assailant when you strike an approaching threat, momentarily knocking the threat out of it with agony. Although you are injecting them with full electrical current, it is only strong enough to cause them agony to the point where they are temporarily stunned, allowing you to safely flee.

Functioning Of A Taser

The Taser’s fundamental design is almost identical to a self-defense stun gun. An attacker or target is stunned or unresponsive when you strike them because electricity is sent via different prongs. The two barbs are still used, but now you fire these into them rather than punch them into them.

Every Taser contains a pressurized gas cylinder that, when fired, bursts and shoots two wires with barbs out the other end. The subject is electrified quickly as the barbs cling to them by their clothing or skin because current is sent via cables and into the prongs.

What Benefits Does The Stun Gun Offer? 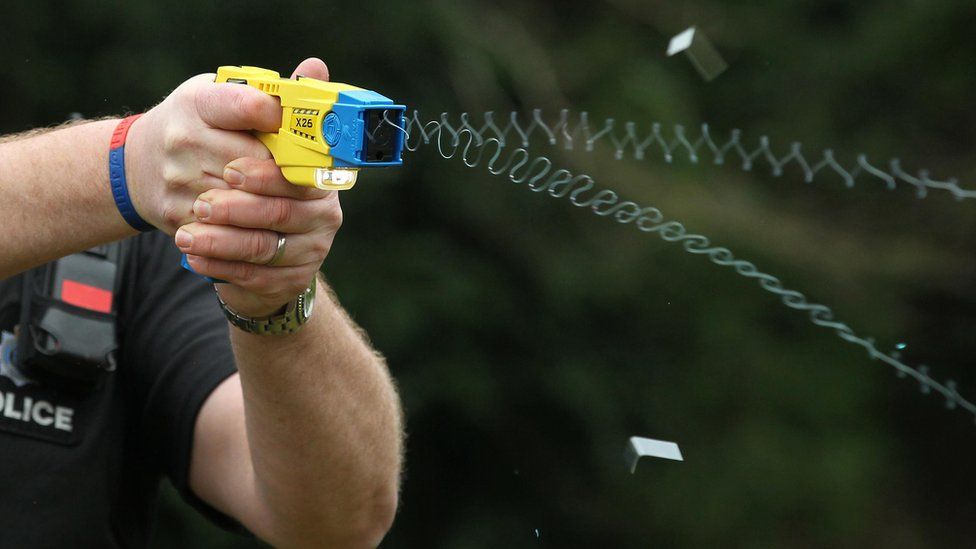 How, then, do we pick between the stun gun and the Taser now that we know how they both operate? Let’s examine the advantages of each of the guns and examine them to understand which one is most suitable for your unique circumstance.

You can disguise this gun to appear like so many of the everyday objects, like makeup or lip balm, a mobile phone, a torch, as well as a strolling baton, thanks to its modest size and concealability.

Since the assailant won’t anticipate you to attack them with lipstick, it will be simpler to draw a weapon when they come. Most persons trying to assault an older lady probably won’t anticipate that their cane will knock them out.

Stun weapons are remarkably affordable! Particularly for a tool that can protect you against life threatening situations! Stun weapons are so inexpensive but still deliver a bang. They cost between $40 to $100, based on the features, structure and capabilities. Even while your existence is precious, that doesn’t imply the tools to safeguard it has to be expensive!

In contrast to pepper spraying or a heavier weapon, a stun gun’s modest size and concealability allow you to grab the adversary off guard and paralyze and halt them swiftly.

Due to the little stun gun’s reliance on discomfort, how quickly you can subdue the attacker depends on their level of pain tolerance and potential level of intoxication.

What Benefits Does The Taser Offer? 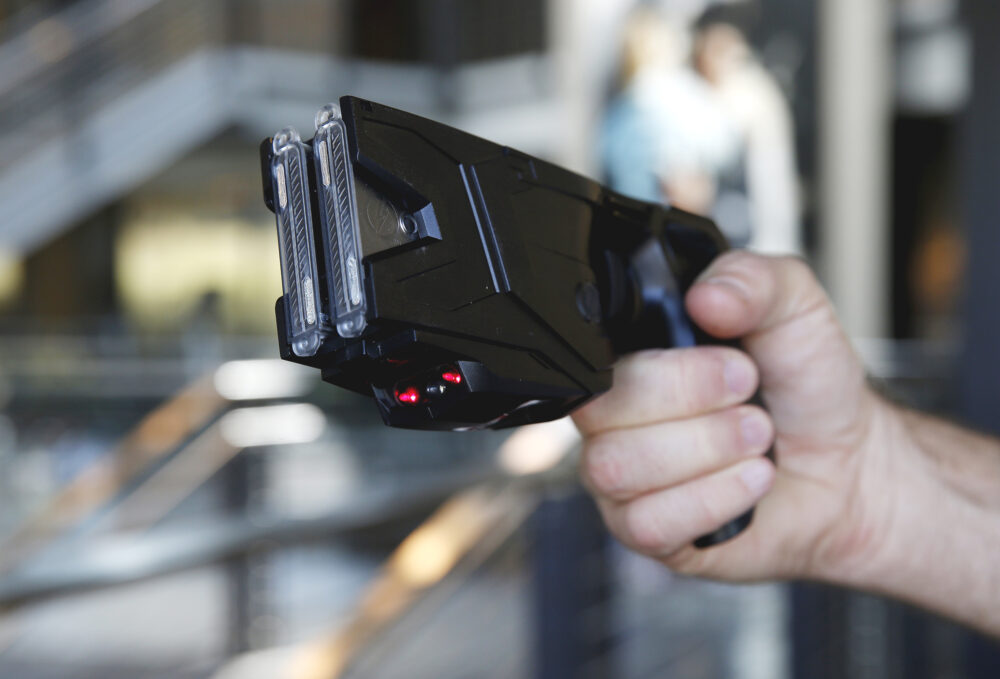 Now that you know what the stun gun has to offer, let’s hop on to see what are the exclusive advantages of the Taser.

Unlike a stun gun, a Taser’s cables and barbs can be fired approximately till 14-15 feet away. This is useful when a nasty man brandishes a wooden stake or a pointed glass piece at you.

Rather than allowing them to get near enough to grasp you or damage you, you can fire them from a distance. Tasing an assailant at a distance enables you to flee away from them and gain more time than an assault only one hand distance from you.

Alright, you can agree that all this looks fantastic immediately, but the laser range serves a useful function in addition to simply appearing great. Rather than merely shooting aimlessly and praying that the two damageable prongs would hit the assailant, the laser point in the middle of the prongs makes it easier to know exactly where you are hitting.

The Taser will care for the rest while you need to aim and fire. Shooting anything without any aim increases the chance of striking something else instead of the intended target. It also prevents you from fleeing if the attacker keeps following you.

Each and every Taser has the appearance and body of a gun, and the moment you aim the laser point at the attacker’s chest, you can be sure they will at least start to retreat. This has the advantage of possibly eliminating the need for tasing them altogether. The individual can flee or withdraw since they will be afraid of getting harmed.

This is beneficial since Tasers only give you a single hit for someone moving toward you, even before gas cartridges need to be changed. Therefore, it prevents you from running the chance of missing if the assailant chooses to flee rather than you not having a new cartridge.

4. It Makes Their Muscles Immobile

To guess, this is the most interesting feature of a Taser. Thus, rather than simply injecting energy into the subject to cause them to experience discomfort, it causes the target’s muscle contractions by itself by injecting electricity into it, which causes the subject to fall over violently.

This benefits assailants with high pain threshold or assailants who are excessively intoxicated and may not experience the agony as intensely. This, in contrast to the stun pistol, causes them to collapse or stumble without even allowing them an opportunity to struggle against the agony.

The use of taser devices and stun guns has both plus points and disadvantages. The basic fact is that both the items can keep you safe in extreme circumstances. Pick the one that seems most suitable to you and is permitted in your jurisdiction.

Now that you know the major distinctions between TASER weapons and stun guns, let’s hope that you are now totally capable of understanding which self defense weapon is ideal for you as per your requirements.