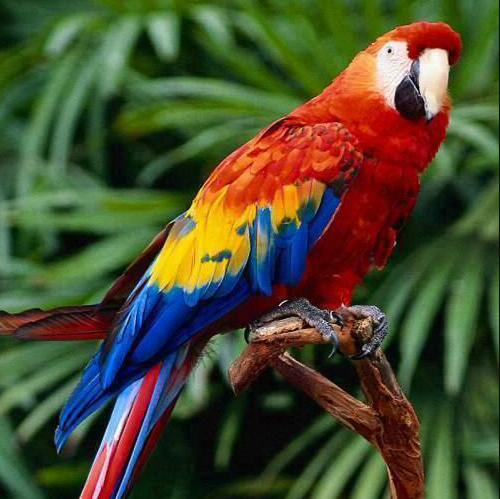 The national bird of Honduras is Scarlet macaw. It is a bird of the order Psittaciformes and of the family Psittacidae, very striking by the colors of its plumage.

According to the country or region is also called red macaw, guaca parrot and red lap; In English, it is called scarlet macaw which literally means “scarlet macaw.

It is one of the largest species of neotropical parrot and is the bird that represents Honduras to the world. In antiquity, the Mayas related it to the force of the sun and the power of fire.

The national bird of Honduras possesses an iridescent red plumage. Part of the feathers of the wings is blue, yellow and to a lesser extent green. The area around the eyes is yellow and his face is dotted with white feathers.

The beak is large and strong and on the other hand, the lower extremities have a dark tone that becomes black. The legs have two fingers forwards and two forwards, which allows the bird to use the fingers as if they were hands. This condition is especially useful when opening fruits and seeds.

The national bird of Honduras (Scarlet Macaw) have medium size bird that measures 80 to 90 centimeters in length, but some can reach 120 centimeters. However, it is the pointed tail which influences the size mostly: it covers a third or half of its entire length. Male and female share much of the physical characteristics although the male may have the tail a little longer. The average weight is 1 kilogram.

Distribution and habitat of the scarlet macaw

She is native to South America and lives in countries such as Brazil, Venezuela, Peru, Bolivia, Honduras, and Mexico. It inhabits rivers in tropical rainforests and wetland savannas and usually builds its nest in the trees at a height of up to 1,500 meters above sea level.

Does Yo Know Hoatzin is the national bird of Guyana?

It is very sociable and not territorial, so it is not strange to see it in the company of other macaws as it flies, eats, rests or sleeps at night. In fact, she is usually affectionate with her peers and in everyday life licks and caresses her with the beak. It is also very curious and able to imitate the vocalizations of humans; hence many macaws are trained for this specific fact. However, if the macaw is disturbed, it does not hesitate to squeal, squawk or guttural grunts. If you are in the nest and you feel a dangerous situation, go out and observe the environment to warn other macaws or return to the quiet nest.


He uses the left paw much to hold his food or to groom himself, thus, this limb functions as if it were an appendix. The fact that this is probably caused by a greater development of the left part of the brain than the right part.

It is herbivorous and frugivorous. Their diet is based exclusively on plants, seeds, and fruits but from time to time also sucks nectar from flowers.

Its beak and jaw are very strong to help break the peel of seeds and nuts. The shell of the Brazilian seed is quite hard, but the macaw eats it without any problem.

Oviparous and monogamous species for life. Reaches sexual maturity around 3 or 4 years of age. It builds its nest in hollow areas of trees, at a high altitude and surrounded by foliage to avoid its predators.

After mating, the female lays 2 to 4 round white eggs that are incubated for about 25 days by the female and sometimes by the male. After hatching the young are fed because the male provides those regurgitated fruits. In the course of 1 or 2 years, young macaws can now become independent.

Unfortunately, the distribution of the red macaw has been reduced considerably by the continued threat of illegal capture, destruction of its habitat, predation of nests by man and other animals, among other causes. Despite this, there are numerous reserves for their protection and environmental programs that favor their survival.

At present, the red macaw is in the category “Minor Concern” of the Red List of the International Union for the Conservation of Nature. 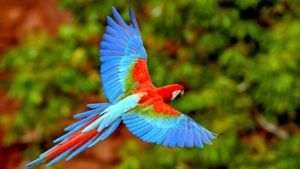 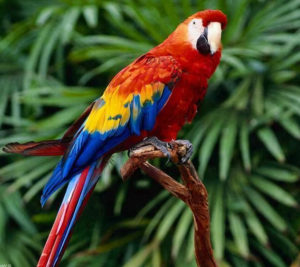 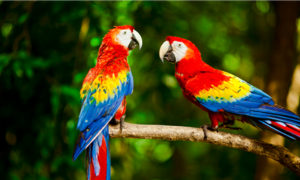