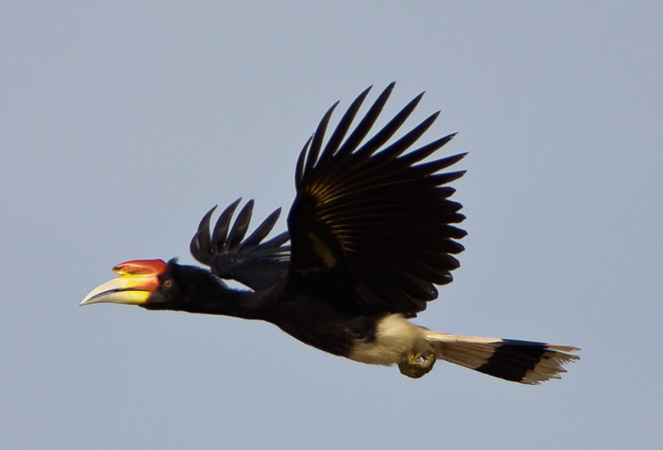 The national bird of Malaysia is rhinoceros hornbill. Malaysia declared it as their official bird back in the 90s. The distinctive birds belong to the class Aves, and family Bucerotidae and genus Buceros. Their binomial name is Buceros rhinoceros. They belong to the hornbill species and are the largest of them. They mostly live in the Southeast Asian region and are shy to human populations and civilization. The number of rhinoceros hornbill populations is decreasing, and they are on the watch list of animal preservation authorities worldwide. The rhinoceros hornbills have a long beak and a horn that is rare in any of the bird’s species except hornbills. They have a beautiful yellow and golden horn, the horn is called casque in English. The horn is used to increase the pitch and sound of the call made by rhinoceros hornbill.

Do You Know African Fish Eagle is National Bird Of Namibia ?

The body is bulky with along tail, their size is equal with that of aswan. An adult rhinoceros hornbill on average weight about 2-3 kg. their length may reach up to 122 cm, the average duration of a fully grown rhinoceros hornbill is 100 cm. Their habitat is mostly in eastern Asia, they live at the altitude of 1400 meters. They have dark blackish feathers on wings and body, the breast is entirely covered with feathers. The tail feathers consist of black and white pigmented feathers.


The primary diet of rhinoceros hornbill which is the National Bird of Malaysia comprises of seeds, fruits, and insects. The secondary diet may include smaller birds and reptiles i.e. snakes and lizards. They usually nest in trees, they either built their own nest with their beaks or occupy the abundant nests. The opening of the nest is filled with mud and other resources to protect the eggs and chicks. The female hatch 3-4 eggs and went into the nest for incubation. Male collects all the food during the incubation period and after birth. The incubation period is longer than most of the birds; it may exceed up to 3 months. The seal outside the nest is only broken when the chicks are able to look for themselves. Here are some of the interesting facts about rhinoceros hornbills: 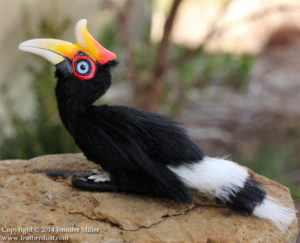 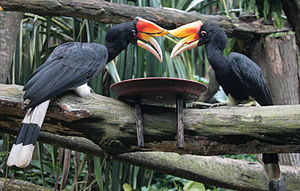 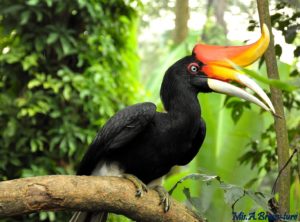