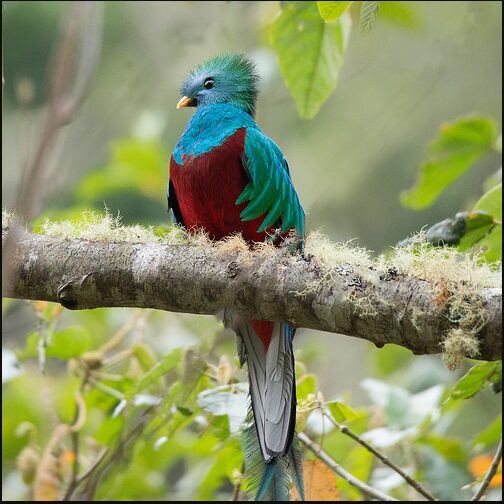 The national bird of Guatemala is Quetzal. It is a bird of long tail and very delicate; of green feathers like the weeds where it inhabits, with blue hues like the sea. His chest is red and gives the impression he had it on the outside.

The national bird of Guatemala is Quetzal was declared as National Ave by Decree No. 33 of November 18, 1871, by the then president, General Miguel Garcia Granados. It was established on September 5 to enhance its value and meaning.

The national bird of Guatemala is Quetzal symbolizes freedom. It is the only bird in the world that, losing its freedom and being caged, dies of sadness. In Guatemala, the authorities protect it because it represents our democracy, freedom, and sovereignty to which, by free decision, we have chosen all Guatemalans

The national bird of Guatemala is a bird of 35 to 40 cm without taking into account the feathers of the tail of the male. The plumage of the male is intense green with the belly and the lower tail covers red. Head with small erectile crest. Extremely long upper and green tail feather.

The plumage of the male is always much more intense and colorful than the female. There are other differences between the male and the female that allow easy recognition. The most obvious difference is that the feathers of the tail of the male are much longer, reaching between 70 cm and 1.05 meters. The maximum growth of these feathers can take 3 years

The adult male has a ridge on the head. His chest and abdomen are scarlet red. The feathers of the bottom of the tail are white, and the upper ones are green, as well as the blankets. It has a yellow-orange beak and its eyes are dark brown. Its legs are olive green and its fingers are orange to dark brown.

The female of the quetzal is not as splendid as the male. Its plumage is brown and darker in color. It has a bright bronze-green head and has no crest.

The feathers of the wing, back and tail are emerald green, as in the adult male; The longest feather that covers its tail does not reach beyond the tip of the tail of its body. It never presents the long tail-like feathers that are characteristic of the male. He has gray chin and throat, his chest is olive brown, his abdomen red, yellow or darker beak, and brown-green legs

The national bird of Guatemala is considered omnivorous. Its food is based on some insects and fruits but, mainly, in tepeaguacate, that is a tree of wild avocados.

When they are hungry, Quetzales are stopped on a lower branch of where the tepeaguacates are, and then they are thrown upwards taking one to the flight; then return to the same branch and throw themselves for another tepeaguacate, repeating until they are satisfied.

Nesting and breeding the breeding season occurs from February to June. In a family group of quetzales, only one pair reproduces annually.

When a female of quetzal prepares to reproduce, it leaves its familiar group towards a clearing of the mountain or another preferred place, followed by the males of the familiar group. The time of the selection of pair is the time when the males realize the greater variety of songs and flights to attract the attention of the female.

During the procession, the males rise to heights of 80 to 90 meters inside the ritual field emitting a peculiar whistle in front of the female that is perched in a tree to a half height of the forest. When reaching this height the males descend forming spirals, which in the downward rotating movement seem garlands, Due to its six long plumes blankets, whose primary function is to attract the female. This courting or selection ritual can last from thirty minutes to two days.


It ends when the female performs her nuptial flight horizontally in the ritual field, at a time when the males are forming spirals at the top. At the moment of the female flight, the males descend in a sting in pursuit of the female to dispute it. The one that reaches to pick up in the head the female is the male who will become his partner until the end of August; The other males return to their family group and do not reproduce at that station.

Once the reproductive partner has been formed, it is disconnected from the family group, initiating a mating phase, which may comprise approximately 15 to 20 days.

The future parents choose the territory that contains trees that provide them with food and possible stumps (old trees) where to nest. The quetzal occupies former nests of woodpeckers who are birds with a strong beak and special structures that protect their brain by pecking the stumps of the trees of the forest, to make their nest. The quetzal cannot peck the trunks in the same way as the carpenter because his beak is very weak. That’s why you use empty nests that you can customize according to your needs.

For nest selection, the pair usually visits 3 to 5 nests. The female carefully selects the nest that is best conditioned in nature, according to the location of the nest, relative to the winds that strike the region and predators. Once the nest is selected, the quetzal enlarges and adapts the nest with its strong legs. In some cases, when the nest is attacked by predators or destroyed by rain, some pairs of quetzal initiate again and present a second nesting.

Do you know Hoatzin is the national bird of Guyana?

When the nest is ready, the female usually lays two pale blue-green eggs of 34.9 x 29.1 mm, spotted with brown dots. Both male and female alternate to incubate the eggs for 18 or 19 days in periods of 2 to 4 hours during the day. The female returns to the nest at dusk to incubate the eggs during the night and the male leaves the nest and makes an area reconnaissance flight, as a security measure, returns at dawn to continue incubating the nest. Generally, a female and a male are born.

Feeding chicks during the first ten days of life include insects and small vertebrates. It is possible that this stage lasts a little more than ten days, which are very important for its rapid growth. It has been observed that, during the feeding period, one or two males of the family group may be present to collaborate with the feeding of the chicks in the nest.

Later, outside the nest, they continue to nourish until the young are fed independently, thus showing a form of cooperative feeding among members of the family group.

The care of the quetzal chicks is in charge of the parents, who in addition to providing them with food care jealously. At this stage, the quetzals run many dangers: The chicks may be prey in the nest or may fall on their first flight attempts. Sometimes, parents cannot raise their nest to the nest again and the nest is attacked by a predator

At five months of age, the young are already flying and can feed themselves. As in many animal species, the young male begins to exhibit the behavior of rebelliousness and independence.

The quetzal is the national bird of Guatemala. It is a bird of long tail and very delicate; of feathers as green as the weeds that live, with blue hues like the seas. His chest is red and gives the impression he had it on the outside. Some Quetzales have the most bluish plumage.

In spite of the vast region in which the quetzal habitat extends, only Guatemala is the people that have best permeated the veneration of the Quetzal in its culture. Legends, traditions and traditional artistic manifestations are steeped in the green of the quetzal and its mysticism. It is even part of the national flag shield, mentioned in the Guatemalan nation’s anthem and is also an inspiration for contemporary songs and poets.

The quetzal has been considered as the tutelary bird, or protector, Of the Mayan people. It is in painting, sculpture, and architecture. His color was the color of the divine, the color of the jade.

The quetzal is present in many Guatemalan Maya stories. Verbigracia, the quetzal was a sacred bird for the town of Cotzumalguapan because it was part of their magic rituals; there is even an ancient dance in honor of this bird: the feast of Quetzalcotzumal.

Another interpretation of the divine value of the quetzal in Guatemalan Mayan cosmogony is given by the conversion of the orchid into this bird. For the Maya, the orchid was the flower endowed with the highest values and beauty. They were the same gods who turned the flower into a bird.

An old legend tells how the lords of Dawn and Twilight were the ones who gave life to the Quetzal. Both gentlemen blew on the crowns of the guayacan trees, and from the swirl of their condensed breath, among the blue leaves of the trees, a lavish bird emerged, flying towards the sky.

Many are the Guatemalan legends that narrate the origin of the mythical bird; however, there is a type of legends that are associated to warriors and emperors, as it is the case of the legend of the warrior Quetzal and the Mayan leader Tecun Uman.

In the first case, Quetzal was a Quiche warrior whose destiny was marked by a prophecy, which bore immortality. His immortality comes to be confirmed when he dies, his soul is transmuted into the bird we know by his name. 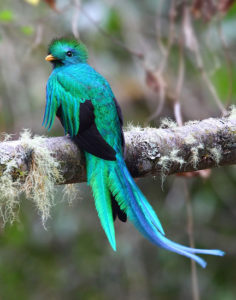 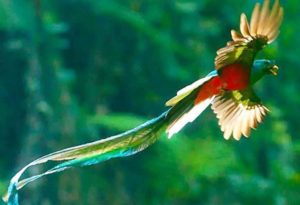 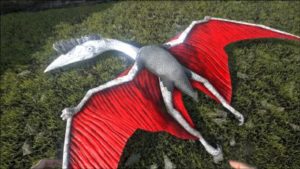