The national bird of North Korea is Northern Goshawk. The Northern Goshawks are found in America and Asia, and according to the limited information from North Korea, it is the unofficial national bird of North Korea. The shape and size of Northern Goshawkare similar to hobbies i.e. eagles and hawks. The bird is sharp and uses its claws and beak to hunt down its prey. They are found in northern mountains with high altitude and cold weather in summers and migrate to southern woodlands and lakes in winters. Northern Goshawks are found in thick forests and hunt down their prey quietly and tactically by moving from perch to perch with a great speed and accuracy, their vision is 10 times stronger than the prey. They feed on small to medium-sized birds, insects, snakes, and mammals, it could be a crow, sparrow, or sometimes rabbits and squirrels, insects, and snakes.

Do You Know Bare-throated Bellbird is the National Bird of Paraguay ?


The Northern Goshawks which is the National Bird of North Korea live in nests and cliffs, they lay eggs one time each year in the spring season. The eggs per season may range between 2 to 4 and a bluish white in color with the typical oval shape. The incubation period is 32-38 days. The males are dominant ones and feed the mother during the incubation period after eggs are hatched, male and female feed the young ones. The male and female Northern Goshawks partner each other for life, a typical hunting style is to hover around the prey from a high altitude before diving in to catch it.

The nests are built by females while the male Northern Goshawks prey at the same time. After hatching the eggs, the mother remains with the young ones for 3 weeks to protect them. The Northern Goshawks belong to class Aves and genus Accipiter, their species A. gentilis is same as hawks and eagles. Their binomial name is Accipiter gentilis. They are found in Eur-Asia, China, Japan, India, Pakistan, North America, Gulf, and North Korea. Some modified species are found in Canada.

The body composition is described as large in size, broad and round wings along with secondary feathers for flight with sharp claws. The color composition is dark and grayish, the head is darker than the body, the eyes are yellowish, and there are contrasts of colors in tail and breasts. 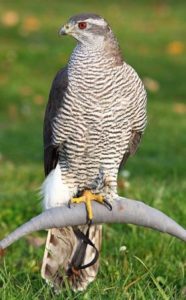 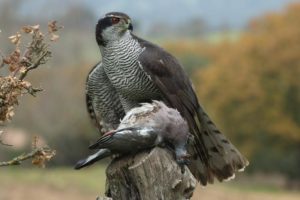 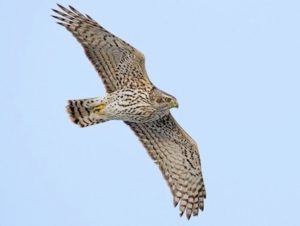