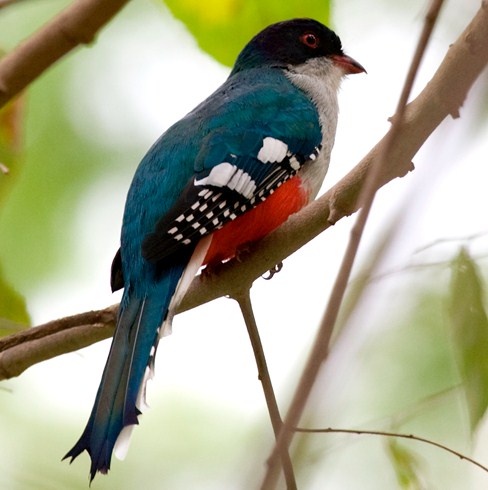 The national bird of Cuba is Cuban Trogon. It is a climbing bird, endemic to Cuba, in genus and species. In their colorful plumage, red, blue and white, the colors of the Cuban flag are easily located, so it is considered the National Bird. There are two slightly different forms, living on the island of Cuba and adjacent cays (P. temnurus temnurus), and living on the Island of Youth or Pines (P. temnurus vescus). Its scientific name is Priotelus Temnurus, of the order Trogoniformes and belongs to the family Trogodinae. It is the only one on the island of this family, to which belongs the Quetzal, national bird of Guatemala. It is called by the Cuban aborigines like Guatiní name that continues giving itself him in some of the Eastern provinces. In English it is known as Cuban trogon.

Because of its bright colors, where white, red and blue predominate, the same ones that adorn the flag of that Caribbean country, and the inability to resist captivity, were chosen as a national bird, one of the unofficial symbols that fly there. Aboriginal people called him Guatiní, a name still spoken in eastern Cuba, as well as the Tocoloro variant, although its scientific name is Priotelus Temnurus.

To see it is necessary to enter the forests along the whole large island and the Isle of Youth, especially in the mountainous areas. In spite of its extensive distribution, including the adjacent keys and cayuelos, it receives the treatment of a species threatened to have disappeared of some spaces where before they were abundant, mainly due to the excessive felling.

It is a delight to behold as you sing, climb or feed on insects, flowers and fruits, without a doubt, for all those who prefer adventure, hiking, ascents, trails offered in various Cuban regions.

Do you know Common Nightingale is national bird of Croatia ?

The Cuban Trogon is selected as the National Bird of Cuba for two reasons: its splendid plumage of vivid colors and its resistance to captivity. It is considered the most beautiful bird of the country since part of its plumage in green remembers the Cuban fields; His white feathered chest, his red plumage belly and the blue feathers on his head reproduce the colors of the national flag.

Beauty and variety of colors characterize this species

The national bird of cuba (Cuban Trogon) male measures about 28 cm in length, the wingspan of its wings is between 39 and 39.5 cm. The tail measures approximately 14.3 – 14.8 cm, while his companion outstrips him in half a centimeter. Also the tail and the wingspan of the females are larger in several millimeters. Apart from this, the couple does not present sexual dimorphism. They alternate in the tasks of incubating the eggs and then feeding the newborns.

It is not characterized by its great mobility and usually rests for a long time with its shrunken neck. She remains so ecstatic in the landscape, and only leaves that position to get food. At that moment, his movements are fast and precise, but at a very short distance. We can easily see it in thick forests with tall trees of various species, such as the soplillo, the seedling and the yagruma. It is a peaceful bird, which allows us to approach it without fleeing.

It nestles from April to July in the hollows of recently abandoned carpenters. The female lays 3 or 4 eggs. Both sexes incubate and feed their chicks.

It inhabits the fields for thousands of years and is located mainly in the Sierra de los Organos, Escambray, mountainous complex of Sierra Maestra, and Isla de la Juventud. Rarely has he been raised in captivity, his freedom is vital to survival.

It is nourished by insects, fruits and flowers that it takes to the flight.

As a species of wild fauna, the hunting or capture of the Cuban Trogon is not allowed according to Resolution No. 81 of 1982, issued by the Ministry of Agriculture and there is a legal instrument to sanction the enemies of the national bird of Cuba. This is the Decree Law 200, dated 22 of December of 1999, which establishes contraventions regarding Environment.

But beyond the legal connotation, the protection of this little wonder of the animal kingdom even has moral connotations. No Cuban can think of damaging a Cuban flag, for all that it means. For that same reason, the Cuban Trogon is respected, not only for being a marvel of biodiversity, but also because it is the National Bird. Their color and love for freedom are not only symbols of the incomparable Cuban nature, but an indissoluble part of this nationality. Protecting them means also defending the Cuban identity. 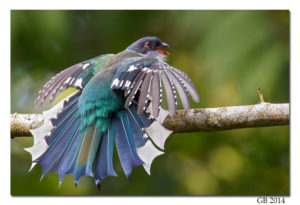 Cuban Trogon (Priotelus temnurus) perched on a branch in Cuba. 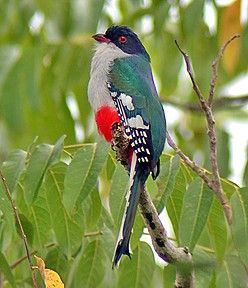