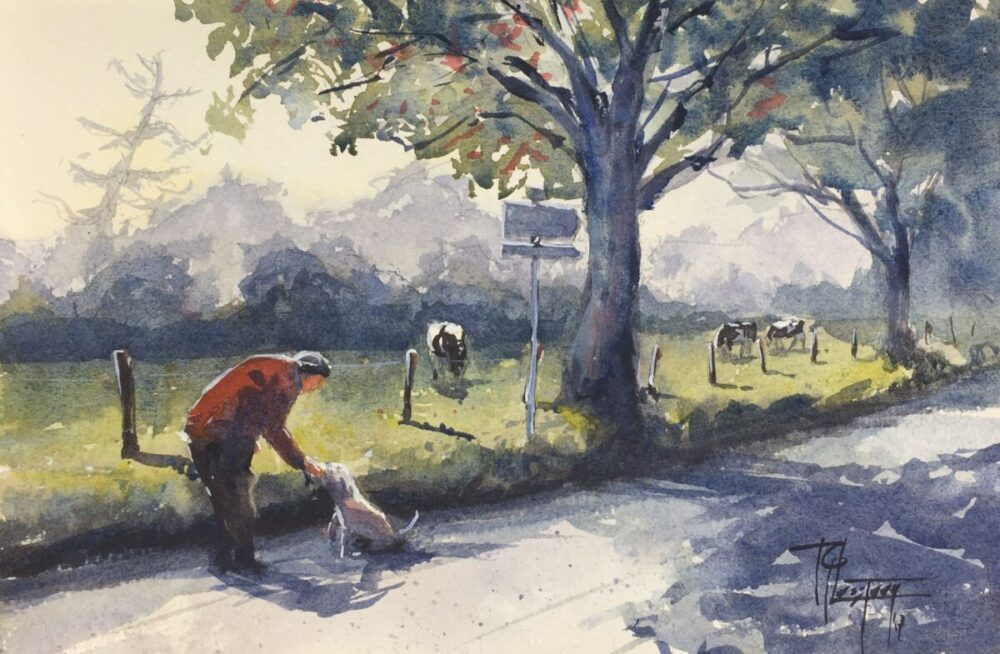 The world offers us picturesque landscapes to experience – just as famous artists present them in their paintings. This way, you can capture the moment of autumn, when the tree canopies turn golden orange and look forward to a spring meadow full of flowers, which will spread the pictures on the canvas in a thousand colors.

Hand-painted art paintings will bring the most beautiful scenes, recorded in the eye of the beholder, into your life. And we will try to show you some of the most calming landscape paintings. For all of you who are artistic souls, this story will be your favorite escape from the city bustle.

The Beauty Of Landscape Paintings 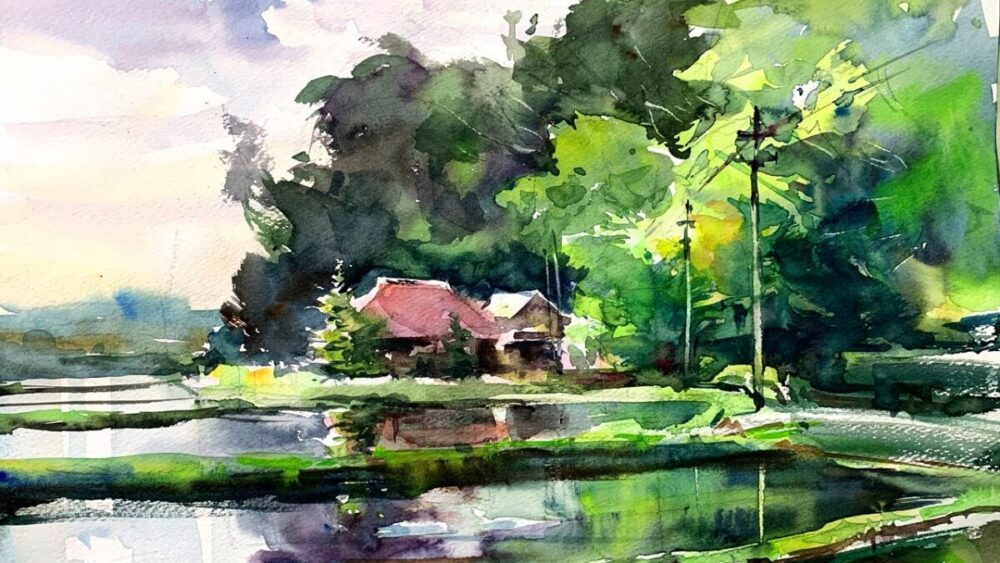 The greatest inspiration for world-famous painters came from sunsets, storms, forests, and natural formations that were immortalized under their brushes and preserved from oblivion, perhaps forever. Also, each author provides his painting with an authentic stamp that tells a story between the lines (or brush strokes) – so such works are often associated with emotions, social issues, and thoughts that every observer is free to interpret in their way. That is why landscapes are among the most appreciated examples in galleries around the world, and the first among the best are the works of French, Russian and Dutch painters. We dedicate the following lines to the most calming paintings and landscapes that the world has seen, as well as to the sources of inspiration of their authors. 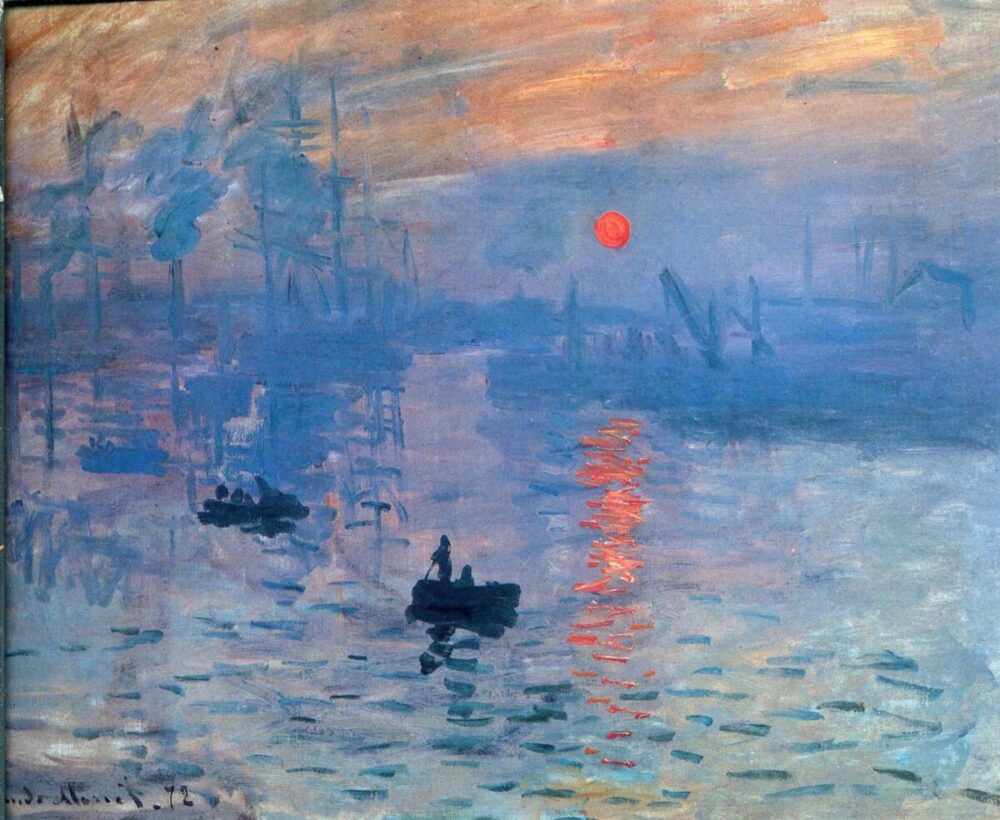 Claude Monet is one of the brightest stars in the artistic sky of France, and we can even dare to say – of the whole world. Monet’s most famous painting is the originator of an entire direction in painting, which got its name from its name – Impression, Sunrise.

Impressionism was born when Monet painted dawn in the French port of Le Havre, combining bold strokes for the restless water, and delicate orange transitions for the sun’s reflection, which almost came to life on the canvas. This landscape painting on canvas shows a newly awakened port with several ships, still covered by the morning mist.

The painting was first exhibited in 1874 in a solo exhibition organized by a group of painters, including Monet, and the criticism was very harsh. Critics then spoke for the first time about the impression in the context of Monet’s painting, but with an unpleasant and mocking tone. At that time, they had no idea that a new direction in painting lay in the impression.

The Impression, Sunrise, is kept today in the Marmottan Monet Museum in Paris – which also represents the largest collection of Monet’s works.

At The Waterfall – Thomas Doughty 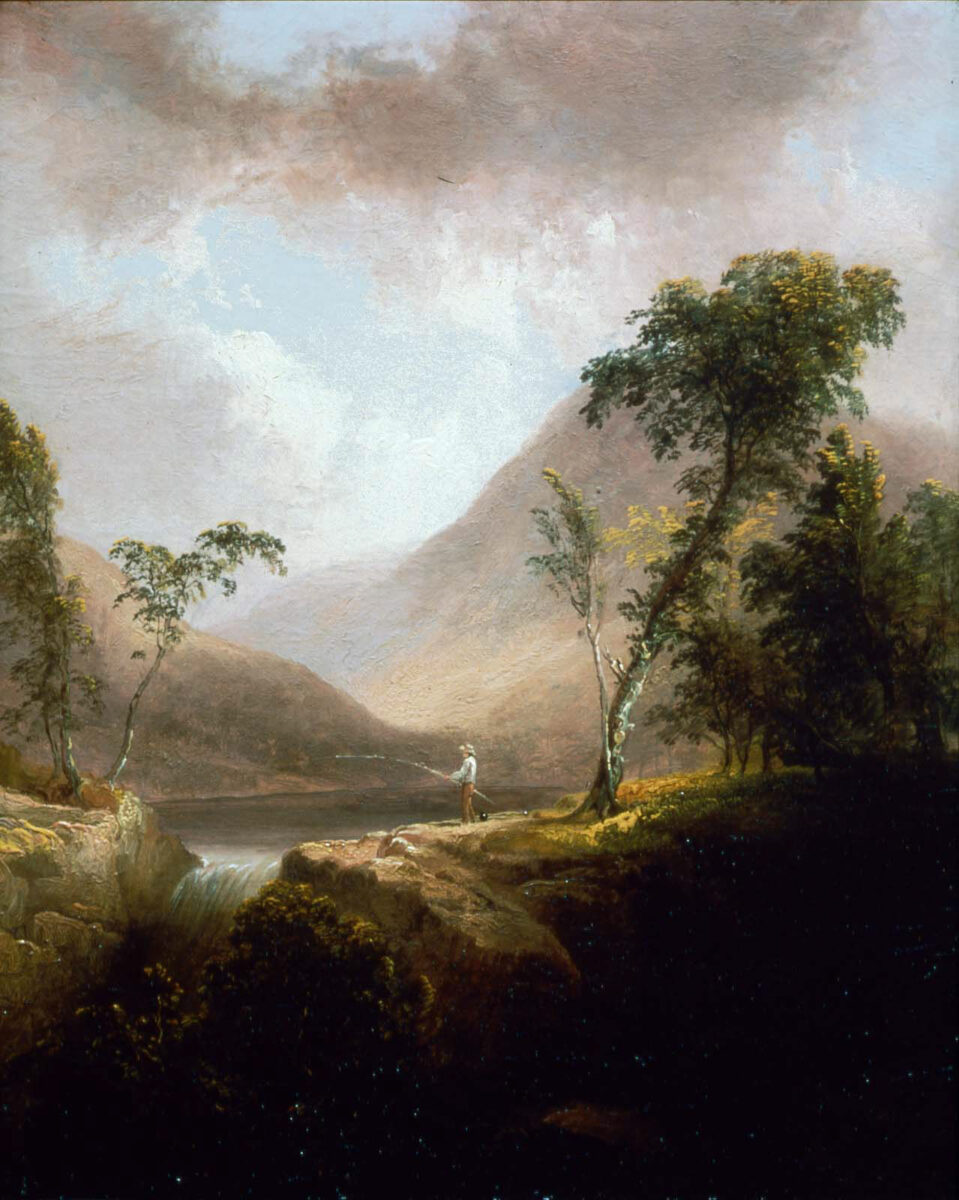 The Hudson River School was an American art movement in the mid-19th century. It revolved around a group of landscape painters influenced by Romanticism. The images of the art movement reflect three American themes that existed at the time of settlement, research, and discovery. The paintings elaborate on the pastoral environment of the American landscape, like a country in which human beings and nature live peacefully.

The most prominent practitioners are the movement’s founder, Thomas Cole, along with Thomas Doughty and the famous Asher Durand. They painted images of pristine wilderness areas of the Hudson River Valley and New England.

Thomas Doughty’s famous piece, According to lavelart.com – At the Waterfall, is a true representative of this school – where in addition to fascinating landscapes, you can also see specific strokes with a brush that was applied to the canvas. Reproductions of these calming paintings for sale can be found in online galleries around the world. One of the soothing scenes that take you back to America in the 1800s.

Landscape Under A Stormy Sky By Vincent Van Gogh 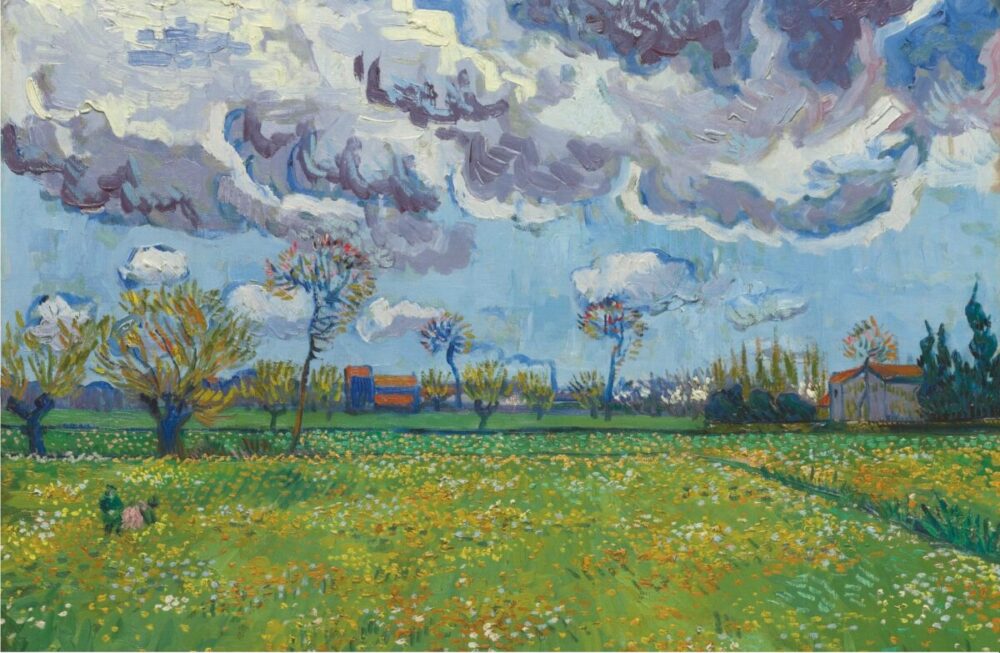 He was not commercially successful during his lifetime. He lived in poverty and mental disorder, and the official version of his death is that at the age of 37, he committed suicide in a small idyllic French village. Entering the landscape painting phase between 1887 and 1890, Van Gogh made some of his major works.

Landscape Under a Stormy Sky is one of the images that have both a calming and a disturbing effect. Characteristic brush strokes and explosions of colors characterize this period in the life and work of this artist. Yet, like most of his works, they gain in value only after his untimely death. 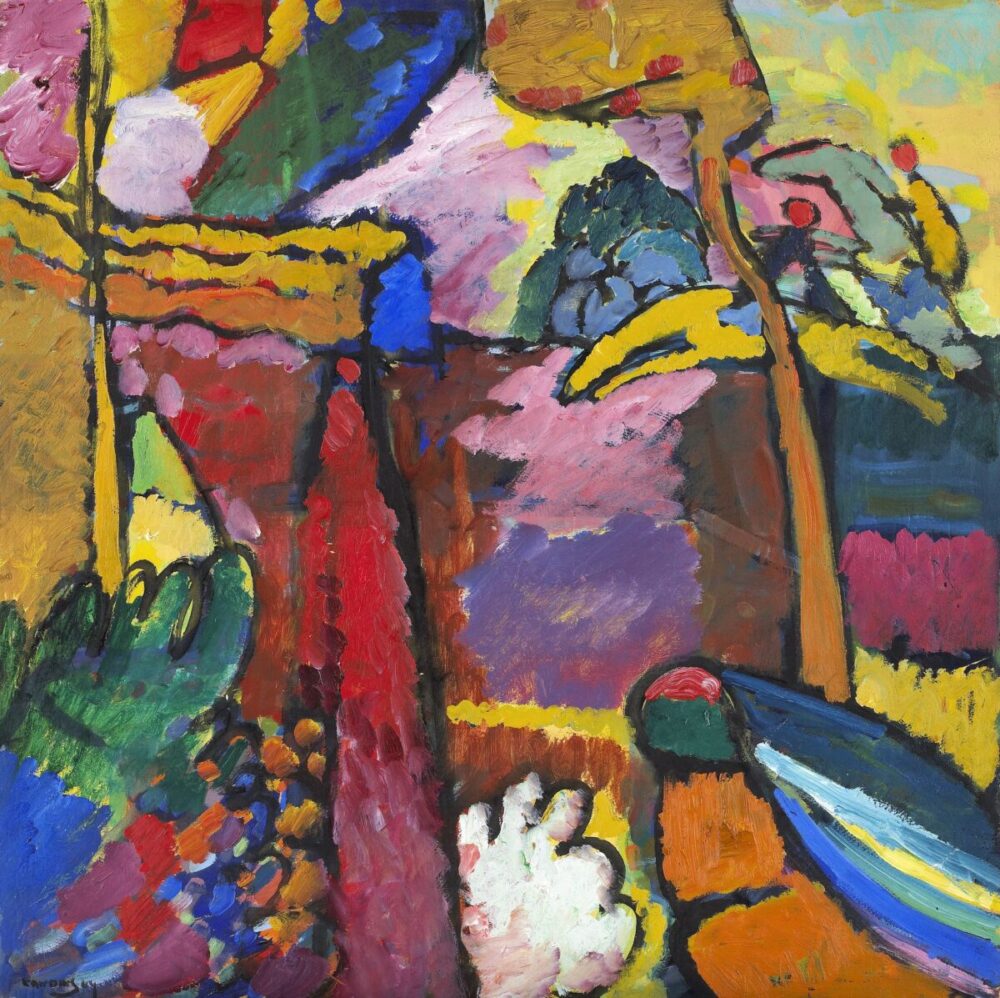 When you look at his paintings for the first time – the work of Vasily Kandinsky will probably make you confused. You will begin to wonder how all these diverse pieces can come from the hand of the same artist? It is possible, especially when you have a lively and dynamic life as Kandinsky had.

Born in Odessa, he also experienced the October Revolution in Russia, and then was exposed to the rise of the Nazis in Germany, before moving to Paris to live there for the rest of his life. His work has undergone astonishing changes, and the images below are a great way to show that.

Entering a special creative phase, Kandinsky began with his specific depictions of landscapes, among which Waterfall II stands out. In any case, one of the masterpieces of the aforementioned painter who went through numerous stages of his artistic creation. 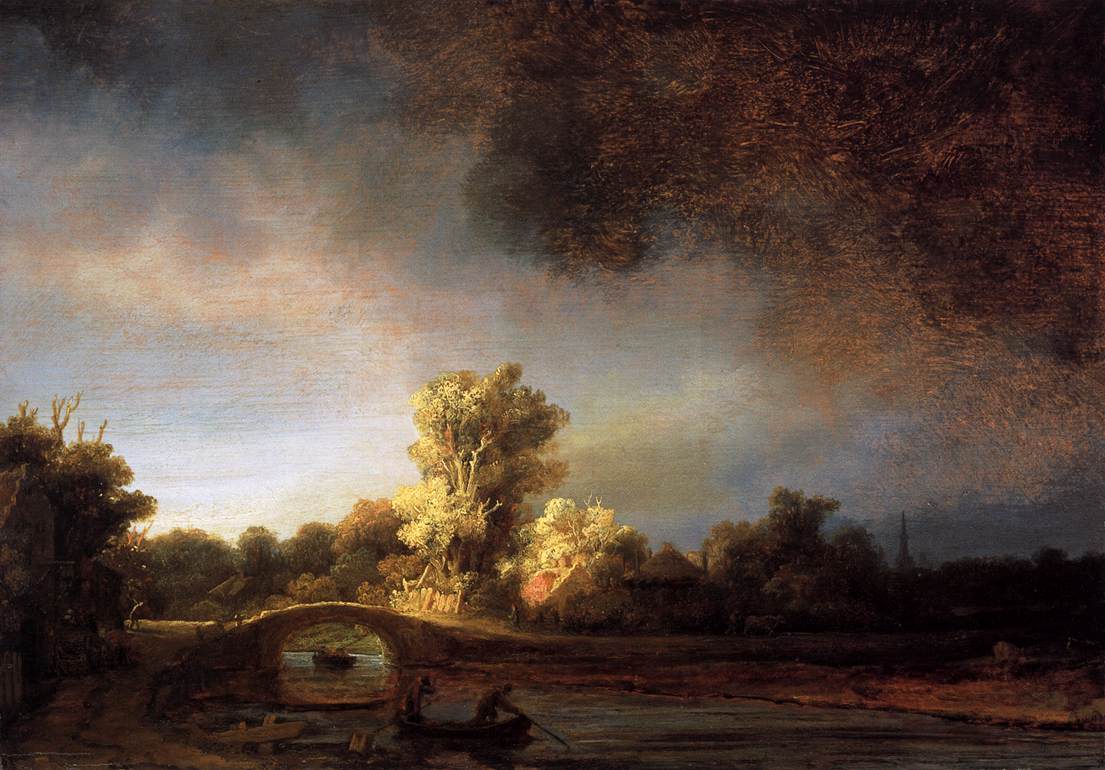 One of the most beautiful painted landscapes in the world is the work of the Dutch Baroque painter Rembrandt van Rijn. This painting was created around 1637.

The picture shows a bridge in the distance, over which shades of blue, green, and yellow are mixed, representing trees and the sky. Rembrandt van Rijn is famous as a painter of light and shadow, and he also painted in the spirit of uncompromising realism – for which he is remembered to this day. Today, the stone bridge is kept in the Rijksmuseum in Amsterdam – the state museum of the Netherlands.

These are some of the most beautiful examples of landscapes in the rich history of world painting – and the best thing is that we have the opportunity to see each of the paintings today, in large galleries and museums. They are kept with the greatest attention – just like they deserve.