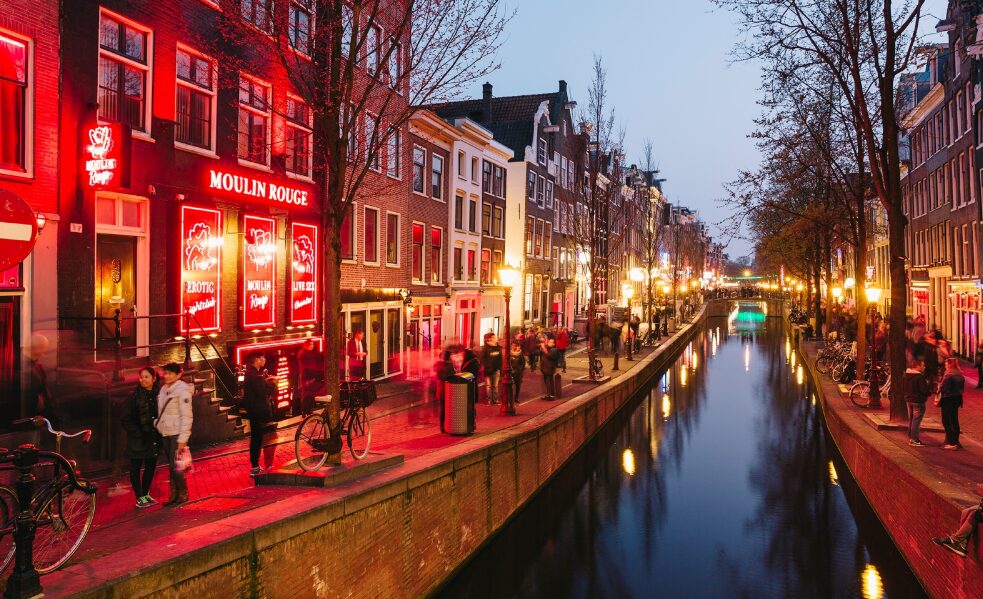 There are many places to visit in Amsterdam, known as the city of bicycles and canals. We have to confess that Amsterdam is one of our favorite cities in Europe and that; in addition, we believe is perfect for a weekend getaway. This multicultural and tolerant city, in which you feel welcomed from the first moment you step on it, is one of those places you would never want to leave.

If you have an extra day in the city, we recommend visiting some of the surrounding villages such as Zaanse Schans, a beautiful village full of windmills or the villages of Marken, Volendam, and Edam.

We have made a list of the 10 places to visit in Amsterdam that are essential, based on our trip to Amsterdam in 5 days. We start!

Places to visit in Amsterdam

Amsterdam, known as the Venice of the North has more than 100 kilometers of canals, more than 1000 bridges and more than 2000 floating houses, part of which are in the old town, bounded by the Singelgracht and surrounded, forming circles by its 3 channels most famous: the Herengracht, the Prinsengracht and the Keizersgracht.

Our favorite channel is the Herengracht, where the most stately and charming houses are found. Strolling along the banks of these canals, crossing their bridges, having a drink on one of the terraces with views, are just some of the great memories that you will get from Amsterdam.

One of the best things to do in Amsterdam. It is a cruise through its channels to see the city from another perspective. Although there are many tours that you can do, we recommend you always book a one-hour walk to see some of the most important places in the city or take a night cruise with dinner. 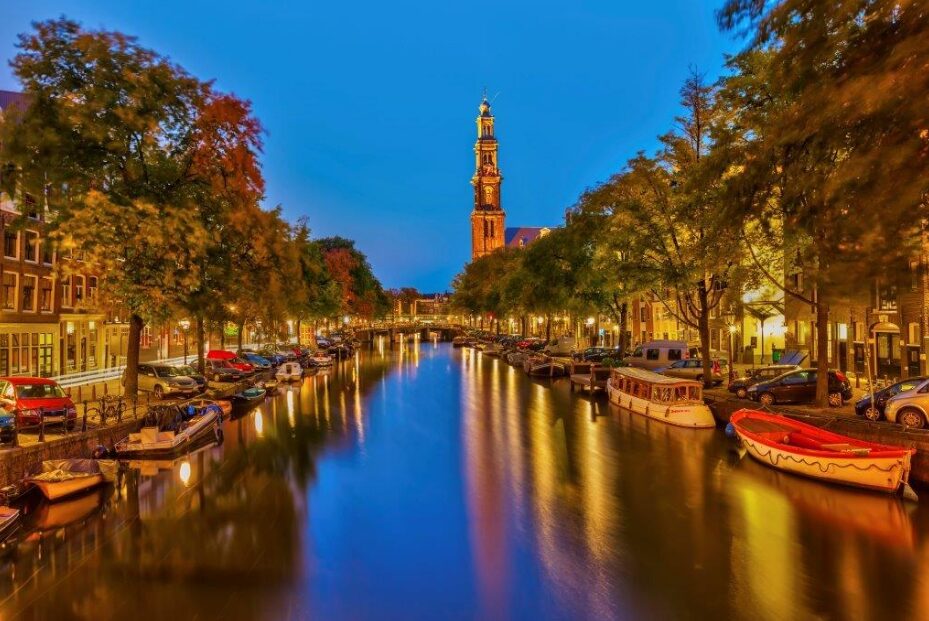 Bloemenmarkt is the famous floating flower market in Amsterdam and one of the most essential places to visit in Amsterdam. The history of the market goes back to 1883 when boats loaded with flowers arrived for sale every day.

We must bear in mind that Holland is a country famous for the quality of its flowers and especially for its tulips, so do not be surprised if in this market you find a wide variety of them. This is also one of the most typical and original souvenirs you can take from Amsterdam, so do not forget to bring some tulip bulbs in your suitcase, they will surely remind you of Amsterdam whenever you look at them. 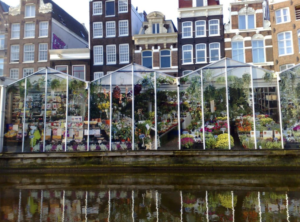 This market, Bloemenmarkt is next to the Singel channel and as a curiosity, we will tell you that it is built on water, something that at first glance is not easy to detect.

One of the best excursions in Amsterdam for flower lovers is the visit to Keukenhof, a beautiful place where you can walk among fields with thousands of colorful tulips. Of course, this trip you have to do during the spring, time of flowering of tulips.

The Van Gogh Museum collects the most extensive collection, with some of its best works, from the great Dutch painter. The museum has more than 200 paintings and 400 drawings by Van Gogh from different periods, including “La chamber de Arles “, ” Los eaters de patatas “or ” Los sunsoles “. It is advisable to take an audio guide to learn more about the history and details of his life and works. Another good option is to book this guided tour in Spanish with an art specialist to make the most of one of the most visited places in Amsterdam. 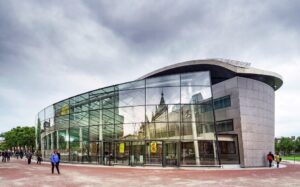 Begijnhof is one of our favorite spots and one of the must-see places in Amsterdam. This treasure is hidden near the Plaza Spuiplein and is perfect to disconnect from the movement of the city.

Begijnhof is a fourteenth-century beguinage, in which lived the sisters’ beatas, with a lifestyle similar to that of the nuns, but with more freedom. Inside the enclosure you will find elegant houses and a charming garden in the central part, which we assure you, you will not be able to stop taking photos. 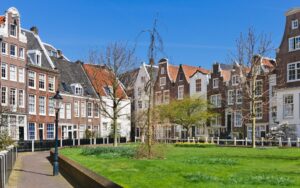 Nor can you miss the Houten Huys, the oldest house in Amsterdam and one of the only two that are preserved in the city with a wooden facade. Another place you have to enter is the Begijnhof Chapel, the first clandestine church in the city.

The Dam Square, located in the heart of Amsterdam, is the most important and most atmospheric square in the city. Most of Amsterdam’s routes depart in one day or pass through this square, where you will always see many tourists sitting on the terraces of the bars or on stairs of monuments and buildings. In the center of the square there is a 22-meter-high obelisk that pays homage or the Dutch soldiers who died in World War II.

Here you will also find the Royal Palace, the Nieuwe Kerk or New Church, the Wax Museum of Madame Taussauds or the luxury shop De Bijenkorf and the start of the most famous shopping street in the city, the Kalverstraat. 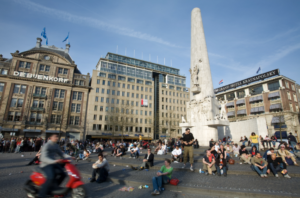 The Red Light District of Amsterdam is located in the historic center and is one of the most visited places in the city. The neighborhood is famous for its nightlife, full of coffee shops, sex shops, red lights and shop windows where prostitutes offer their services.

We must bear in mind that prostitution is legalized in Amsterdam, just like the consumption of marijuana in coffee shops, so it is not strange to see these activities.

Most tourists visit the neighborhood during the day to have a drink in one of its many terraces and coffee shops and visit it at night moved by curiosity. Although the neighborhood may seem lawless everything is perfectly ordered and guarded, so you should not be afraid to walk at night in the area. What you should have is respect and education before women who provide their services and do not take pictures to the windows or to them. 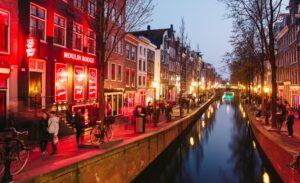 In the Red Light District, you can also visit Oude Kerk, the first church in the city and Warmostraat, the first street in Amsterdam.

The Museum of the Anne Frank House in Amsterdam is one of the most breathtaking and essential places to visit in Amsterdam. In the back of the museum building lived the two years of Anne Frank’s family during the Nazi occupation of Amsterdam in World War II.

Anna Frank wrote here her famous newspaper and the only survivor of the hiding place, her father Otto Frank saved it and published it when the war ended. 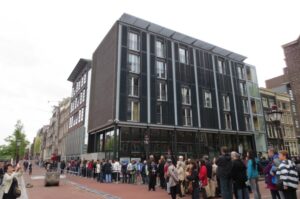 At the entrance, they will give you a brochure in Spanish explaining the history and the places you will see during the visit, among which the most outstanding are the hiding place and the original diary of Anna Frank.

The Anne Frank House is located in the Jordan Quarter, our favorite in Amsterdam, with its narrow streets, gardens and the beautiful Brouwergacht canal. After the visit, it is worth walking around the neighborhood and sit on a terrace of its beautiful cafes.

A good option to know the relationship between Amsterdam and the Nazi regime is to book this tour of Anne Frank through the Jewish quarter.

Vondelpark is the most famous park in Amsterdam and the perfect place to walk, play sports or picnic on the lawn. This public park of 47 hectares is not far from the city, so it is full of locals and tourists with the first rays of sunlight. In addition to green areas, nature, flowers, statues, lakes, and rivers, you will find from an open-air theater to a good variety of restaurants and cafes. 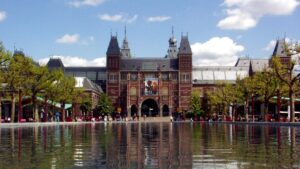 A good way to get to and visit the park is with a bicycle tour, one of the best ways to see the whole city and enjoy it as a real local.

Located near the park is the lively square Leidseplein, full of street artists, terraces and fashion shops, a visit that we advise you not to miss in the city.

Although there are several churches to visit in Amsterdam, our favorite is Oude Kerk or old church. This church located in the Red Light District was consecrated in 1306 and became the oldest building in Amsterdam. Outside you can see its Gothic spire with a carillon of 47 bells, while in its interior the beautiful stained glass windows, its three pipe organs and especially its roof, the largest medieval wooden vault in Europe with paintings of the fifteenth century. As a curiosity on the floor in front of the church is a bronze sculpture that refers to prostitutes in the neighborhood. We will be attentive to see if you find it. 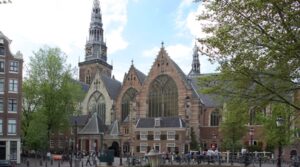 Other churches that are worthwhile are Westerkerk, with the best panoramic views of Amsterdam from its tower and Nieuwe Kerk, from the 15th century.

The Rijksmuseum or National Museum of Amsterdam is the most important museum in the Netherlands, with more than two million visitors per year. During the visit, you can take a step through the history of art in the country, from the Middle Ages to the last century with its best works. Inside you can find masterpieces by Dutch Golden Age painters and a large collection of Delft pottery. 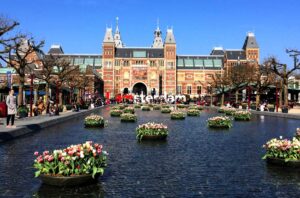 His most outstanding works are some of Rembrandt’s masterpieces such as La Ronda de Noche, The Tree of Jesse or The Jewish Bride.

The museum is located in the Museumplein area, very close to the Van Gogh Museum and in front of the famous letters I Amsterdam(now they are itinerant) in which all travelers have a photo. A good option to visit it is by booking a guided tour in Spanish that also includes a cruise and a visit to the Van Gogh Museum.