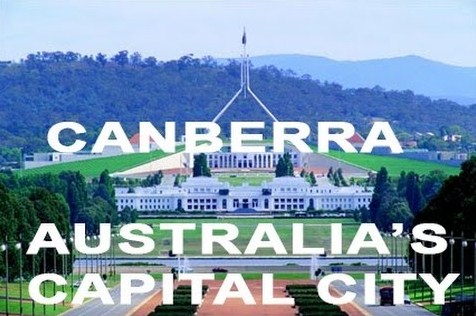 The capital city of Australia is Canberra, a city with a small town and green spaces that does not have the look that we could expect from the capital of this great country.

It is located 150 kilometers inland from the east coast of Australia. This area was already inhabited 21,000 years ago, and before the arrival of the Europeans it was the territory of two indigenous groups, the Ngunnawal and the Walgalu, who coexisted with a wise sharing of the vast space. The European population began with the arrival of the first farmers in 1824. Nothing in this part of Australia attracted the attention to win the title of capital.

Why Canberra is the capital of Australia?

As time passed, British settlers, especially Scots settlers settled, and with the arrival of the white man ( and smallpox and measles ), the native population declined. It was farmland and little else. But the nineteenth century ended with new political ideas. From 1788 the Australian territory had been explored, taken as possession and administered. Little by little, as the white man gained ground, territories and administrations were subdivided.

The gold rush awakened around 1850 attracted large numbers of immigrants. Between 1855 and 1890, the then six Australian colonies individually gained their own colonial rule, administering most of their internal affairs while still forming part of the British Empire. By the end of the nineteenth century the idea of achieving a single capital for all of them grew.

Do You know national bird of Kuwait is Falcon.

The controversy was also born: Sydney and Melbourne were disputing the title of Capital of Australia, and spent the time of political wanderings without reaching any definition. In 1907 they decided on a “scientific” solution commissioning a surveyor, the study of a pair of possible locations for the future capital. He had decided to cut through the sane and build a city from scratch. The first capital planned from its foundations.

An agreement was reached between the territories for the transfer of land and thus the Australian Capital Territory was formed, something like the Washington DC of the United States. And nothing was planned and built the new capital: Canberra. The work was designed by the American architect Walter Burley Griffin in 1912, winning project of an international competition. The construction of the capital began in 1913 ( year that is taken as the one of its “foundation” ) and by the beginning of the 1920s it already had the first inhabited neighborhoods.

Canberra is organized in quarters or neighborhoods according to functions and characteristics: an administrative area, a commercial and business area, an industrial and labor, university, residential and recreation. The master plan included the future expansions of the city so that throughout the twentieth century has experienced several scheduled extensions.

The Molonglo river flows through Canberra and has been dammed in 1963 to form the artificial lake Burley Griffin , located in the center of the city. To the south of it are the main administrative institutions of the country, whose focal point is the Parliament. The city or commercial district, the residential districts and universities are to the north of the lake.

Canberra is today one of the smallest capitals, with about 350,000 inhabitants and an airport that has hardly any international routes. The vast majority of travelers who want to visit it, arrive in Australia via Sydney (300 kilometers away). In short, the question of capitality was formally resolved, but reality commands and Sidney takes all eyes.