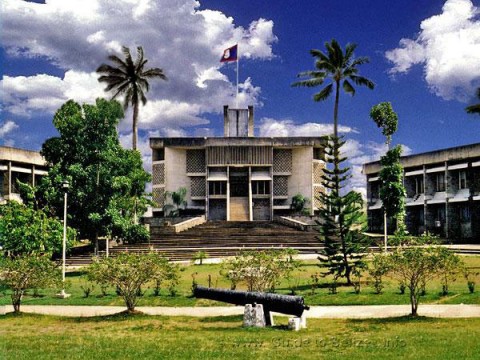 The capital city of Belize is Belmopan. It is located in the center of the country, specifically in the district of Castro. It is considered as one of the smallest capitals in the world and has an estimated population of 13,400 inhabitants (according to 2005 census).

The Capital City Of Belize

The city was founded in 1970 and was immediately invested as the capital of Belize. Its name derives from the union of Belize (river near to this city) and mopan, indigenous ethnic group of the region.

In 1961, after Hurricane Hattie destroyed about 75 percent of homes and businesses in Belize City, the government of the time proposed building a new capital on more appropriate land.

In 1962, a site called Belmopan was selected as a capital city of Belize by an expert committee which was located 82 kilometers west of the old capital. The site is 76 m above sea level, near the valley of the Belize River, with an excellent view and cool climate.

Do you know Brussels is the capital city of Belgium ?

In 1964, Prime Minister George Price led a Belizean delegation to London to raise funds to finance the new capital (Belize at that time was a colony known as British Honduras).

In 1967, the construction work began but without all the funding needed to complete the project.

In 1970 the first phase of the new city was finished with a cost of 12 million US dollars and the name chosen for the new capital was Belmopan, which consists of an acronym integrated with the name Belize River and its tributary The Mopan River, which flows near the capital.

Belmopan is located in the center of the country, forming an integral part of the Castro district specifically between the coordinates: 17 ° 25 ‘N, 78 ° 56’ W 31 km (50 miles) away from the Caribbean Sea and 76 meters (250 feet) On the level of the sea, located near the valley of the river Belice .

Its climate is tropical and temperatures range between 18 and 32 ° C, with June and July being the hottest months.

Rainfall is abundant, with January being the wettest month and its total annual precipitation is over 300 mm.

The population of capital city of Belize is a mixture of ethnic groups that has been shaped throughout history which includes Creoles, Garífunas , Mestizos, Mayans of Belize and in recent years immigrants from Asian countries such as China and Taiwan, among others.

Around Belmopan there are areas with a population of different ethnic groups or origins, among which the greater number of inhabitants in the area of ​​Salvapan stands out:

Salvapan has a population of 3000 inhabitants mainly of Central American origin.

San Martin counts on a population of 1694 inhabitants of mixed origins between which they stand out criollos and mayas Central American.

Riviera: population with a mix of Central Americans, immigrants and locals.

Capital city of Belize has developed tourism as one of its main bases of its economy; it has infinity of commercial establishments, restaurants and hotels. Industrial activity is minimal.

The city has several schools where all levels of education including the university at the University of Belize are taught.

Among the most important cultural activities in Belmopan are the presentations of the Belmopan Choral Society, the Festival of Arts for schoolchildren and the activities of the National Day.

In the city there is a certain development in the local teams of basketball and soccer. The UB’s “Black Jaguars” team has won two national championships playing outside of Belmopan. Also noteworthy are some softball tournaments held at the beginning of the year.