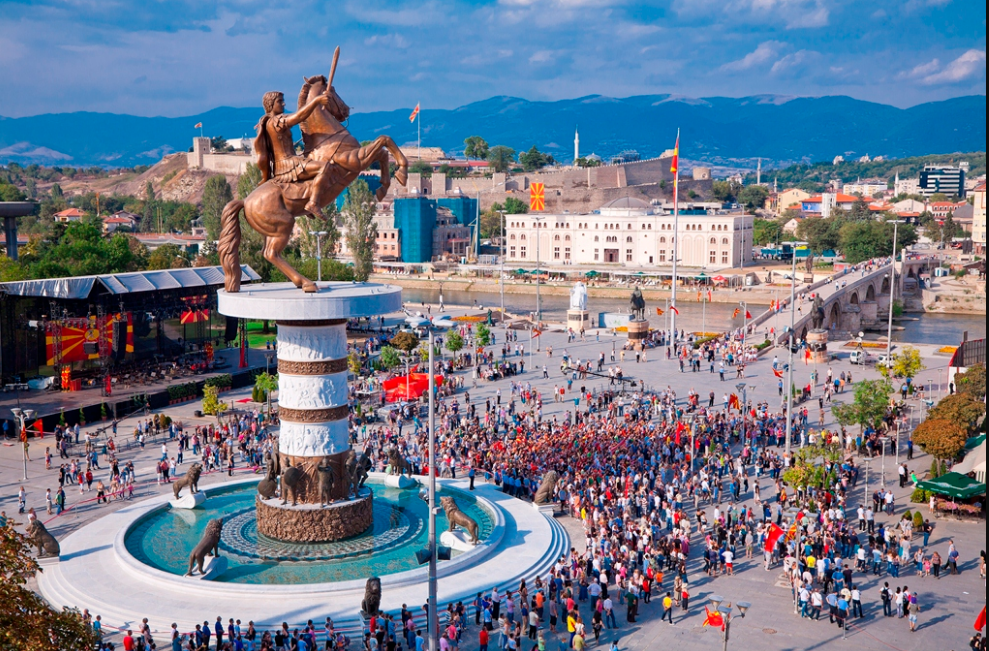 West in the South and East in the North: a trip to Skopje makes the compass crazy. The river Vardar is to blame, which, when crossing the city, separates two worlds: on its southern shore, the visitor is at the heart of the Balkans, and in the north, in some village of Anatolia.

Skopje, with 670,000 inhabitants, more than a quarter of the country’s population, which is constantly reinventing and rebuilding. After the terrible earthquake that struck in 1963, first. And now with the great project Skopje 2014, launched in 2010 and which has been translated by the construction of dozens of monuments, buildings and statues in a neoclassical style somewhat pompous, which is far from arousing unanimity.

View of the two banks of the Vardar

The fortress or ‘kale’ of the Macedonian capital.Enlarge photo
The fortress or ‘kale’ of the Macedonian capital. CSP
Two accommodation options are the Stonebridge Hotel or the Bushi Resort,  start the visit to the Kale (3) , the fortress that dominates the city. The site has military uses for some fifteen centuries: among its many military inhabitants were the Ottoman Army and the Yugoslav Army from which Macedonia became independent in 1991. The most spectacular are its walls, now restored, and the views of
the city . 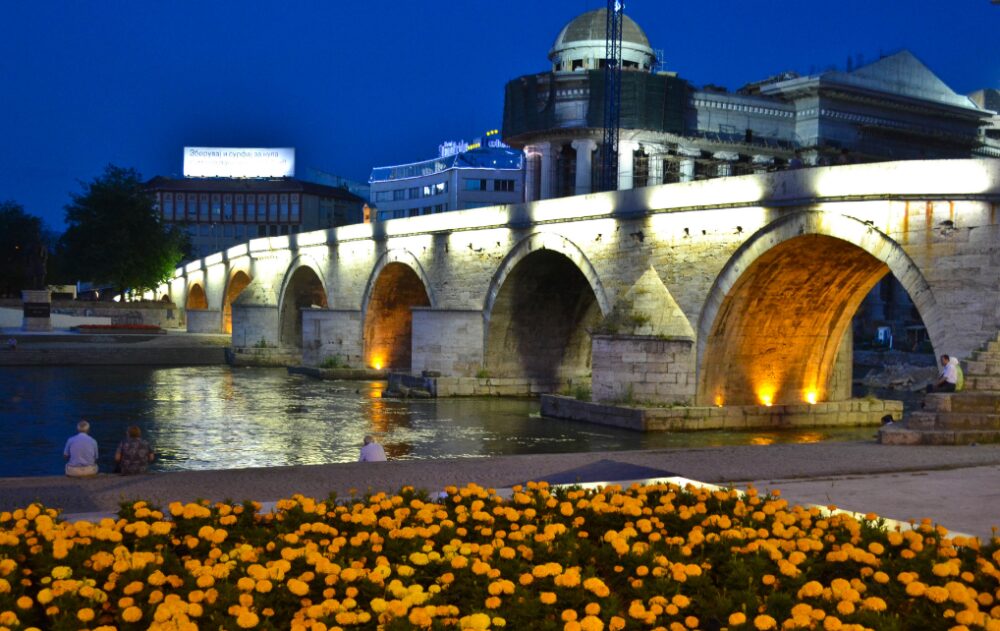 The Stone Bridge , which crosses the river with its 13 arcades. It was built in the fifteenth century by the Ottomans. From there, a walk along the nearby banks of the Vardar is bordered by official buildings (museums, ministries, judicial offices), most of them new but with a style that seeks to revive the past. A somewhat pretentious and kitsch historicity style , that of a Parthenon
passed by Las Vegas. Two other bridges run parallel to the Stone Bridge: one of them with the statues of 35 Macedonian artists. Another one with more statues, this time of “significant personages of the history of Macedonia and of the world” … although great part of them are unknown for the visitor.

Do You Want To Know About City Capital Of Luxembourg?

A museum on sovereignty

Next to the Stone Bridge is the Museum of the Macedonian Struggle for Sovereignty and Independence . Opened in 2011, it is fundamental to understand the collective psyche of a people whose neighbors, mainly Greece and Bulgaria, refuse to recognize as a nation. The visitor moves between wax statues and huge wall paintings depicting the Macedonian struggle against all dominations: Ottoman, Bulgarian, Greek, German or Communist. Battles, insurrections, repression, torture: the tone is military and patriotic, typical of a national community obsessed with self-assertion.


The memory of the Jewish community

On the other side of the street is another important museum: the, so written, Sentro Memorial of the Holocaust of the Dowans of the Makedonia (6) . Also inaugurated in 2011, it was financed, after the end of communism, with the money of the goods of the Macedonian
Sephardic Jews without descendants. It depicts the life of the Macedonian Hebrew community, with its profusion of ancient photos, until its abrupt end in 1943, when 7,215 of its members, or almost all of them, were deported to Treblinka by the Bulgarian
government allied with the Third Reich. None returned. 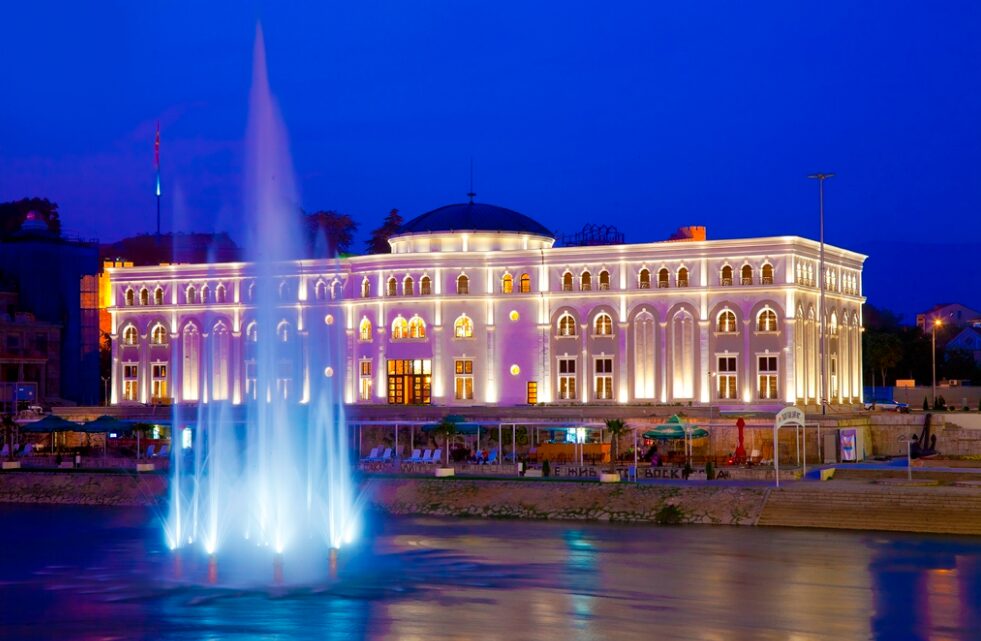 Turkish and Arabic music
Now let’s change continent by going to the Turkish quarter, called Carsija , that is, “place of the market”. Here Turkey is not a vestige, but the present. Women with their long coat and hijab carefully placed walk the labyrinth of small pedestrian alleyways,
where the profile of some minaret always emerges. The men drink tea or smoke the hookah on the terraces of the cafes while they play dominoes. The muezzin’s voice calling to prayer is mixed with the sounds of Turkish or Arabic music coming out of the tents. The animation is maximum around the han, the old caravanser where the commercial activity was centered in the Ottoman period. Always crowded, the small square in front of one of them, the Kapan
Han , With its cozy terraces, is the ideal place to have lunch. Also worth visiting is the Kursumli Han , to which two arcade floors give a harmonious cloister aspect.

Before leaving the neighborhood of Carsija you can visit a solitary advance of the Christian world in Muslim lands: the monastery of Sveti Spas (10) , with its spectacular iconostasis ten meters wide and six high made of finely carved wood. The church is half- buried in order to circumvent the Ottoman prohibition on Christian places of worship from being taller than mosques. Opposite Sveti Spas is the small street of Gradiste, center of the Skopje move, where dozens of boys and girls (some with hijab) sip their drinks on the terraces of the many bars.

Alexander the Great and his horse Bucephalus

After crossing back the Vardar by the Stone Bridge, one lands back in Europe. First with the square of Macedonia  , dominated by a martial statue of the national hero par excellence, Alexander the Great (although the pedestal does not name it), on a horse that
caracolea. From there you can follow the avenue of Makedonia , the symbol of the modern Skopje with its shops to the last and the large terraces of its bars. Here you can visit the Memorial dedicated to what is probably the most famous daughter of the city: Mother Teresa of Calcutta  . He continues to enjoy the admiration of the inhabitants of this city where he was born in 1910.