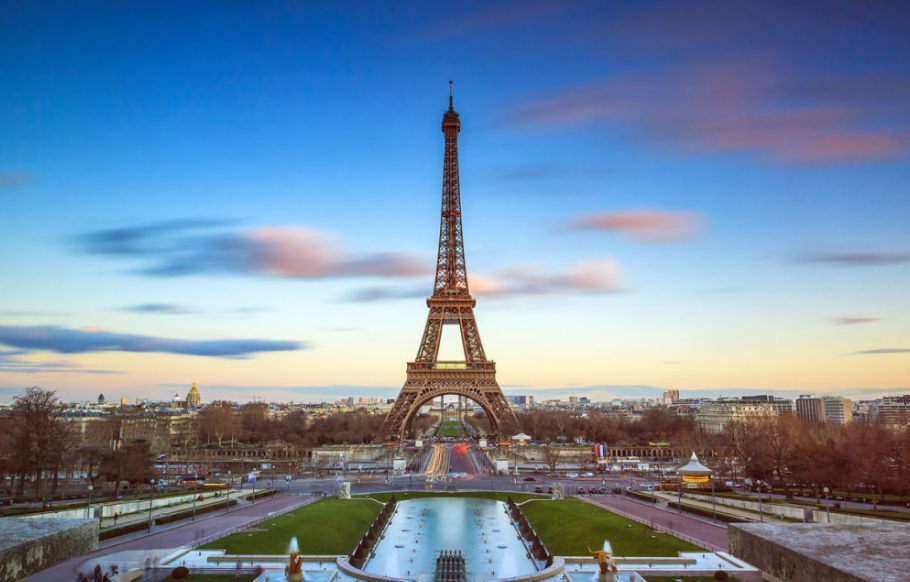 Paris is the capital city of France and is one of the most visited tourist places in Europe. Places to visit in Paris are characterized by having a lot of art and glamor throughout the city.

Among the tourist sites of Paris are the museums that exhibit a large number of paintings and sculptures by renowned artists. In addition in the city, there are monuments, squares, important churches and other places of great interest.

Places to Visit in Paris

When you arrive in Paris, you split the immensity of the sky in two. The Eiffel Tower, the symbol of France, is offered from everywhere. With a height of 324 m, this puddled iron tower dominates the panorama from the universal exhibition of 1889.

Its construction in two years, two months and five days was a real technical and architectural feat. With an initial planned duration of only 20 years, it was his immense popular success and the scientific experiences of GUstave Eiffel, who proposed using it as an antenna for the first radio broadcasts, which ended up saving him. Although its construction was very controversial, this masterpiece ended up conquering the hearts of the most skeptical. At present, it is the scene of numerous events of international stature. 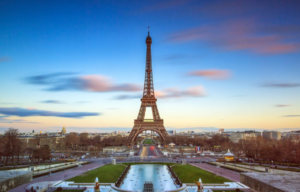 The emotion begins to be felt from the ascension to the monument. Each year, around 7 million visitors climb the three floors of the tower. From above, Paris offers a wonderful view. As we go up, the city reveals itself: the monuments begin to appear, the cars get smaller and the landscape changes.

Every night, the Eiffel Tower shines. To continue enjoying this magical environment with the city of light at your feet, you can taste the exquisite dishes of one of the restaurants in the tower, the 58 Tour Eiffel, on the first floor, and the Jules Verne, in the second, or treat yourself to a glass of champagne on the third floor.

Discover the city of light from another point of view on a cruise in an elegant typical ship. Once on board, let you be rocked peacefully between the monuments and the buildings that border the river and enjoy the stroll along the Seine.

This river has always been the backbone of Paris. Geographically it is the central axis of the capital, a consequence of the role it has played in the history of the city. Very soon it was valued as an important territorial and economic resource, and that is why it has accompanied the Parisian development. The testimonies of this rich past determine the current city. 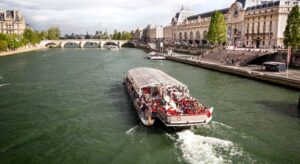 The stained-glass windows allow you to fully enjoy the view of the Seine and its banks. In a dreamy atmosphere, this boat will allow you to share a perfect moment with your loved ones. It may even be the perfect time to declare or reaffirm your love for your better half.

The Moulin Rouge is the leader of the shows of Paris, if not of all Europe. For 126 years, the most legendary Gallic cabaret has welcomed millions of spectators who come to admire the famous French cancan.

The Moulin Rouge is a place appreciated by artists from all over the world. Mistinguett, Edith Piaf, Jean Gabin, Frank Sinatra, Liza Minnelli performed in this legendary setting: Mistinguett, Liza Minnelli. In addition, the best-known cabaret in the world was also immortalized by the painter Henri de Toulouse-Lautrec, whose paintings and posters guaranteed the Moulin Rouge a fast and international recognition. 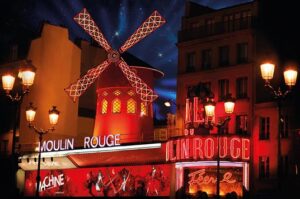 The lights in the room are turned off, the curtain is opened and when the entire cast is on the scene, the spectators are drunk with the beauty of the Doriss Girls and the Doriss Dancers. The 80 artists, coming from all over the world, are adorned with their 1000 dresses of feathers, rhinestones, and sequins made by the most important tailors of Paris. The show also consists of magnificent glittering sets and unique designs made by Italian artists. It’s time to attend exceptional numbers, including the return of the giant aquarium, with original intoxicating music. And how to forget the famous leg raising of the most beautiful girls in the world!

Notre Dame is a masterpiece of French Gothic architecture. Promoted by Bishop Maurice de Sully, its construction lasted for more than two centuries: from the beginning of the 11th century until the first half of the 14th century. The Notre Dame de Paris cathedral has witnessed numerous events of the first order, such as the arrival of the Holy Crown in 1239, the rehabilitation process of Joan of Arc in 1456 or the coronation of Napoleon in 1804.

The monument is known for its sublime balance, although if you look closely, you will notice different asymmetric details that were introduced to break the monotony that classical Gothic promoted. 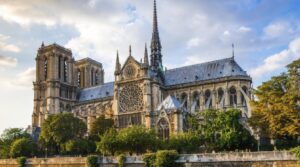 Its spectacular rosettes, its treasure of precious objects and its magnificent bells are the symbols of this masterpiece. The visit that we propose allows you to access the gallery of the chimeras before continuing the ascent to the summit of the south tower, where you will find yourself face to face with the fearsome gargoyles while enjoying a fascinating view of Paris.

With more than 20 million visitors each year, the cathedral is the most visited free monument in Paris and throughout Europe.

The top point of the capital, Montmartre Hill is known for its Basilica of the Sacred Heart and for its panoramic view of Paris. You will also discover the Byzantine and Roman character of the basilica while enjoying the scenery. 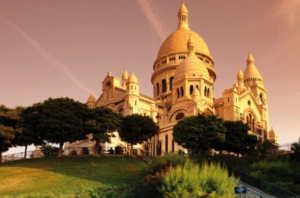 Stop at the lively Piazza del Tertre where painters, portrait painters, and caricaturists work in the open air and exhibit their works. Renoir and Van Gogh are two magnificent examples of those who decided to settle here.

After the “classic” visit, explore more intimate corners to get the most out of the area. Montmartre is also a cultural and gastronomic district with authentic charm. Its sloping alleys surrounded by ivy-covered houses and its staircases will lead you to enchanting cobbled squares: this is the true charm of Montmartre. Lose yourself in its picturesque streets, cross the romantic path of Brouillards and visit Clichy Square, where you will discover true architectural gems.

The glass pyramid located in the Cour Napoleon has quickly become the emblem of the museum. The fortress of Philippe Auguste (thirteenth century) that surrounds it was remodeled and became a royal residence for several centuries. It was in 1793 when the Central Museum of the Arts, the first national museum, opened its doors. Year after year, the collections expand and fill the palace more and more.

At present, the immensity of the Louvre museum is impressive: it is estimated that it would take nine months to see all his works one by one. In addition, it is one of the largest museums in the world with an exhibition area of 73,000 m² in which 38,000 works are displayed to the public and another 460,000 are preserved in the museum. 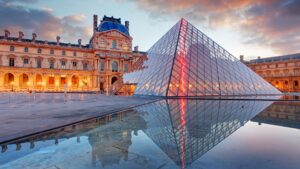 Would not you like to walk in front of the Louvre’s masterpieces? La Gioconda, Venus de Milo, and Victoria de Samothrace are the favorites of visitors. Among the best-known works are the seated scribe, the Code of Hammurabi, the head of a female statue of the type “idols crossed arms”, the diamond known as the Regent and even the impressive collection of Egyptian art.

A walk through Paris necessarily passes through the Marais, a historical and indispensable district of the right bank that has become one of the most popular in the city. It is full of interesting places if you are a lover of art, gastronomy or shopping. It is the favorite neighborhood of Parisian bohemian bourgeoisie, although the Jewish population and the homosexual community have also managed to give a strong character to old Paris. Day and night its cobbled streets bustle with the future of tourists and Parisians from this and other neighborhoods. The success of the Marais has meant an incredible increase in the price of real estate, although this has not affected the charm that characterizes the neighborhood. 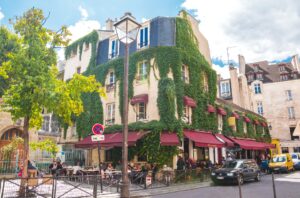 Getting lost in its streets means discovering an architecture free of the influence of Haussmann, admiring the palaces of the 17th district, enjoying the smell of falafel and old books, admiring the work of artists and young creators, trying a cocktail in a modern bar … definitive, a concentrated mixture of what the capital offers to its five senses; a broth of intangible pleasures that will be better captured in your memories than in a postcard or a photograph.

Apollo is still holding his gold lyre at the top of Garnier Palace. The successive volumes fulfill each one a specific function that allows dramatizing the exit to the show.

This masterpiece of neoclassicism is owed to the architect Charles Garnier and was inaugurated in 1875 as the new opera of Haussmanian Paris at the end of the Second Empire. He fascinated his contemporaries thanks to the wealth, the eclecticism and the ingenuity of his architectural and decorative plan. The architect had the best workers in France, as well as the best painters and sculptors of his time. For the first time in France, Charles Garcia used the decorative mosaic to decorate the vaults of the Grand Foyer gallery. This work became the most important of the Italian-style theaters. 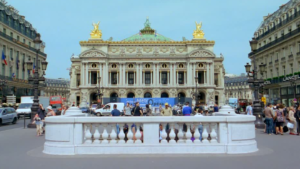 If you are interested, you should know that the price of the ballets, operas, concerts, and recitals of the Opera Garnier are not so crazy.