The national flag  of Iraq has had five different designs since its first adoption, in 1922. The current version is officially adopted 22 as January as 2008, it consists of three horizontal bands color red top, white the intermediate and the lower black. In the center of the white band is an inscription in Kufic calligraphy of the phrase Allah o Akbar, that means “Allah is great”. Unlike most national flags, the national flag of Iraq is raised with the right side towards the mast.

The national flag of Iraq is red, white and black, but the three green stars in the center representing unity, freedom and socialism.

The phrase ‘Allah O Akbar’ (God is the greatest), written in Arabic in green by order of Hussein during the first Gulf War in 1991, is maintained. The script was originally a reproduction of Husein’s letter and was unofficially changed in 2004 to Kufic, a well-known form of ancient Arabic calligraphy originating in Iraq. The new national flag of Iraq will only wave for a year, while the debate continues on how the final banner should look.

Do you know about the National Flag of Iran ?

In 1920 Iraq became the Mandatory Iraq after the defeat of the Ottoman Empire in the First World War. It was a Class A mandate of the League of Nations, a mandate under Article 22 and entrusted to Great Britain when the Ottoman Empire was divided in 1920 by the Treaty of Sevres after the First World War. This concession was completed on 25 of April of 1920, at the conference in San Remo in Italy. A national flag was adopted at the birth of this new semi-independent state and, inspired by the colors of the Arab Rebellion, was composed of three horizontal stripes in black, White and green with a red trapezoid next to the mast, which in some variants could become a triangle. Inside the trapezoid, two white seven-pointed stars were located, representing the fourteen provinces that made up the country at the time. The flag and its colors were closely associated with the Hashemites, the leaders of the Arab Rebellion, who would become the Iraqi royal family when Iraq gained full independence in 1932. The Hashemiteites were also rulers of the neighboring Kingdom of Jordan, which explains the great similarity between the Iraqi flag of that time and the current Jordanian flag. At present, this flag is used by some monarchist movements inside and outside of Iraq. The Kingdom of Iraq would have a turbulent development and would not last beyond a couple of decades. In 1958, King Faysal II was overthrown and executed by a group of revolutionaries led by Abdul Karim Qasim, who established a Republic. Britain had an interest in occupying the territory that had been in the Kingdom of Iraq since the nineteenth century, as in doing so it hoped to halt Russia’s advance through Central Asia and consolidate its control over the Suez Canal and the Persian Gulf. During World War I, Britain occupied the Ottoman province of Basra, disembarking troops at Shatt al-Arab, with the aim of protecting the oil interests of Great Britain. European soldiers continued to advance through Mesopotamia and occupied the viyalato of Baghdad in March 1917. In addition, the term Iraq began to be used by the British to designate the occupied territory, since the historical term Mesopotamia only comprises the viyalatos of Bagdad and Basora. The postwar civilian government of Iraq was headed at first by the High Commissioner, Lord Percy Cox and Colonel Arnold Talbot Wilson. British retaliation after the assassination of a British officer in An Najaf could not restore order. The British administration was slow to establish itself in the mountains of Kurdistan. From the Hakkari Mountains, beyond the border of northern Iraq and the plains of Urmia in Iran, thousands of Assyrians began to migrate to Iraqi territory seeking refuge from Turkish repression. In April 1920, the League of Nations handed over formal control of Iraq to Britain in the form of a Mandate.

On July 3, Iraqi nationalists began an uprising against the British occupation, which led to the retention of 65,000 British soldiers. Meanwhile, the British named King Faysal ibn Husayn, a member of a Sunni family who collaborated with them during the war. Faysal had been proclaimed king of Syria by a Syrian national congress in Damascus in March 1920 but was expelled by the French in July when they took control of Lebanon and Syria in the form of League of Nations Mandates. The Shiites then fought a holy war, which was crushed by the British, who were converted into second-class citizens in the young nation. The Arab insurrection provoked 2. 000 casualties to the occupiers and 8,450 Iraqi, and in Britain a movement was initiated opposing the permanence of troops in Iraq. TE Lawrence, hero of the war better known as Lawrence of Arabia, was one of the first voices to oppose his country’s intervention in Iraq.

As a result of this opposition, Britain signed a series of bilateral treaties with the Iraqi government, and was the first Mandate to receive a Parliament and a Constitution. However, the British did not recognize Iraq as a sovereign nation. Although the UK recognized Faysal as King, he also reserved the right to appoint British officials to key government posts, working as advisors, so many nationalists saw the King as a puppet ruler.

The Constituent Assembly of the Iraq Mandate was established in 1924, and discussions between nationalists and British were common, the former opposed the proposal that military control should fall on British officials. They also refused to grant such broad powers to the British High Commissioner. The High Commissioner responded by announcing that if no agreement were reached the League of Nations would be asked to ratify the Mandate in its original terms, which would mean the end of all Iraqi progress. The threat served, on June 11, the Assembly approved the British-Iraqi treaties and agreements. The nationalists continued to push for more independence, and in 1927 negotiations resumed and, although an agreement was reached, the British refused to ratify the agreement unless Iraq paid all its debts. Finally in 1930, a new agreement was ratified, but the United Kingdom reserved the right of crossing troops by Iraqi territory and the installation of air bases.

The new Iraqi flag, including three stars instead of two, would be the proposed flag for the new supranational state, being adopted briefly by Syria. Although the talks finally did not come to fruition, the flag remained as an Iraqi emblem and finally the meaning of the three stars was changed to represent each of the terms of the Baathist motto “Freedom, unity, socialism” (Wahda, Hurriyah , Ishtirakiyah in Arabic).

The design of the Iraqi flag would be united to a series of flags that would have similar characteristics, all representing (at least originally) the desires of the formation of a unique Arab state. The flags of Egypt, Syria and Yemen have these characteristics.

The 2 of August of 1990, the Iraqi leader Saddam Hussein ordered the invasion of the nearby emirate of Kuwait, which subsequently causes the outbreak of the Gulf War. The November to January of 1991 was amended including the takbir (or statement of faith of Islam) consisting of Allah O Akbar meaning “Allah (God) is great” between the stars and that would have been written in calligraphy Hussein himself. The inclusion of this religious phrase, in spite of the secularism that had previously characterized the Baathism, is generally considered as a way to gather support within the Islamic world during the Gulf War against the coalition led by the United States. In 2003, a US-led military coalition would overthrow Saddam Hussein’s government in the so-called Iraq War. With the end of the Ba’athist government, one of the objectives of the new transitional authorities was to eliminate the symbols that remembered that era, being the flag between them. The 26 of April of 2004, the Governing Council of Iraq announced the approval of a new flag after receiving more than thirty proposals. Designed by an Iraqi architect based in London, Rifat al-Chaderchi, the flag had a completely new design with respect to the previous ones: a celestial crescent on a white background (representing Islam and peace) under which two horizontal bands of color hung blue (symbolizing Mesopotamia and its two rivers, the Tigris and the Euphrates) separated by a golden strip representing Kurdistan. Although the new flag was designed in order to integrate the various nationalities existing in the country and to mark the beginning of a new era, a series of protests broke out in Iraq against the adoption of the new flag. The flag was burned by insurgents in Fallujah the day before its supposed official adoption, on April 28.

The rejection of the new flag forced the suspension of adoption and was later completely discarded. A new flag was made official on 28 of June of 2004 when he assumed the Interim Governing Council. In that emblem, the takbir was written with the Arabic calligraphy of Kufic type and not with the manuscript realized by Saddam Hussein of the flag, thus eliminating the symbology of the overthrown regime. This change, however, did not end with claims that the flag remained a symbol of Hussein’s oppression of various groups in the country. For these reasons, the government of the Kurdish Autonomous Region decided to ban the use of the Iraqi flag in its territory and, instead, As national symbol was adopted the flag used between 1959 and 1963 . Because of these disputes, the Iraqi government decided to adopt a new provisional flag, the 28 of January of 2008, completely removing Baathists stars and leaving only the central takbir with three color stripes. The flag would have a year and would be replaced by a new one during 2009 that contains some symbol that represents the minority towns that inhabit the country. This new design would be accepted by the government of Kurdistan, which allowed its use in the territory under its jurisdiction. The 15 as July as 2008, The Iraqi government announced the competition to select the new national flag. Until the end of September of 2008, the government would receive the various proposals and then choose three designs would propose to parliament, which would select the winner later that year. 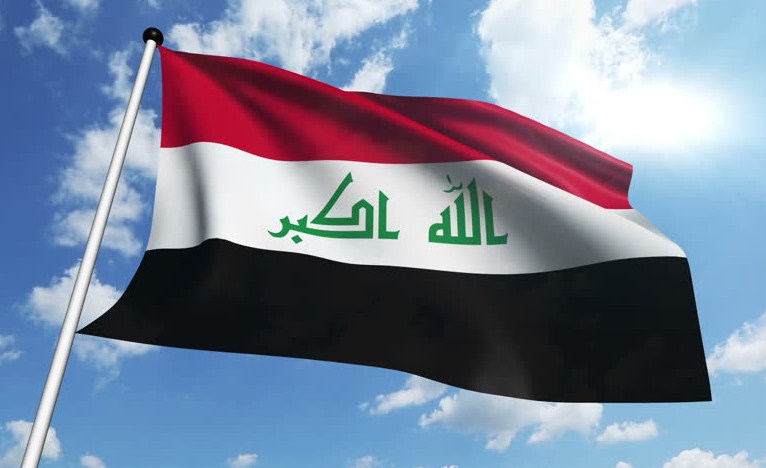