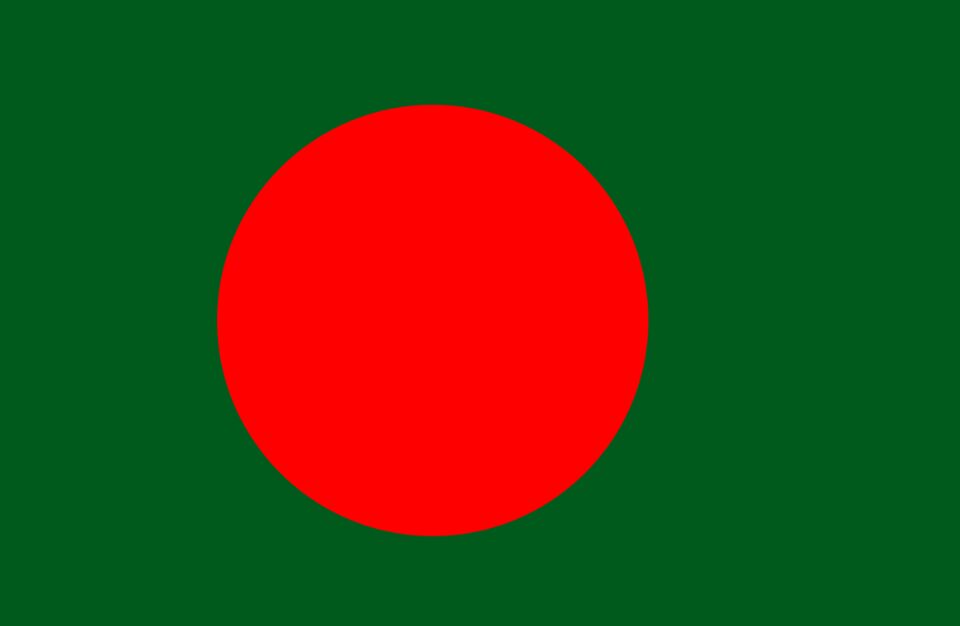 The national flag of Bangladesh named officially the People’s Republic of Bangladesh, it is a country located in South Asia. Its territory is almost completely surrounded by India, except for a small strip to the southeast where it borders Myanmar. Geographically, the country is situated in the fertile terrain of the Ganges delta, so it is subject to annual floods caused by monsoons and cyclones. Together with the Indian province of West Bengal, it is the ethno-linguistic region of Bengal. In fact, in Bengali, the name “Bangladesh” means “country of Bengal”

The exact origin of the word “Bangla” or “Bengal” is unknown, although it is believed to be derived from Bang, a Dravidian-speaking tribe that settled in the region around the year 1000 BC In this area, the kingdom of Gangaridai was formed From the end of the 7th century BC, although later it was united with the kingdom of Bihar, to finally be submitted by the empires of Magadha, Nanda, Maurya and Sunga.

From the third century to the sixth century, Bengal was part of the Gupta and Harsha Vardhana empires. After the latter’s fall, a Bengali leader named Shashanka founded a short-lived kingdom in Bengal. In this way, Shashanka is considered the first independent king in the history of Bangladesh. After a period of anarchy, the Buddhist dynasty of the Pala ruled the region for four hundred years, followed by a shorter reign of the Hindu dynasty of the Seine.

Islam was introduced in Bengal in the 12th century by Muslim merchants and Sufi missionaries; the later Muslim conquests helped to spread Islam throughout the region.

In 1204 , Bakhtiar Khilji, a Turkic general, defeated Lakshman Sen of the Sena dynasty and conquered much of Bengal . For the next centuries, the region was ruled by dynasties of sultans and masters Bhuiyan.

Do you know about the national flag of Bahrain?

In the sixteenth century, the Mughal Empire conquered the territory of Bengal, while Dacca became an important center of the Mogul administration.

When India was divided in 1947, Bengal was separated according to religious tendencies: the western part was integrated to India and the eastern part joined Pakistan, as a province called East Bengal (later renamed East Pakistan), with its capital In Dhaka.

In 1950, a major agrarian reform was carried out in East Bengal with the abolition of the zamindarí feudal system. However, despite the economic and demographic importance of the eastern part, the government and army of Pakistan were largely dominated by the upper classes of the west.

The Bengali Language Movement of 1952 was the first sign of friction between the two sides of Pakistan. Discontent with the central government over economic and cultural issues continued to increase over the next decade, during which the Awami League emerged as the political voice of the Bengali-speaking population.

In the 1960s he called for the autonomy of the region and in 1966, its president Sheikh Mujibur Rahman was imprisoned, being released in 1969 following an unprecedented popular uprising.

In 1970, a strong cyclone devastated the coast of East Pakistan, killing more than half a million people, but the central government’s response was almost nil. The discontent of the Bengali population grew when Sheikh Mujibur Rahman was barred from taking office when the Awami League candidate won the majority in Parliament in the 1970 elections.

After holding talks with Mujibur Rahman, Pakistani President Yahya Khan arrested him on the morning of 26 as March as 1971 and launched Operation Searchlight, a military assault conducted in Pakistan Oriental. Yahya’s methods were extremely bloody and the violence of the war resulted in numerous civilian deaths.

The main objectives of this operation included intellectuals and Hindus, while about ten million refugees fled to India. Estimates of war victims range from 300,000 to 3 million people killed. Prior to his detention by the Pakistani army, Mujibur Rahman formally declared the independence of Bangladesh and encouraged the entire population to fight until the last soldier of the Pakistani army was expelled from East Pakistan.

The flag of Bangladesh was adopted on January 17, 1972 and is very similar to the Japanese flag (except for the green background). Originally, a flag with a gold map of the country was used; however this design was abandoned for reasons of simplification. Therefore, the flag is composed of a green band with a red circle. However, the circle is not positioned exactly in the center of the flag, but is slightly shifted to the left, which creates the illusion that the circle is actually in the center when the flag is hoisted. The circle represents the beginning of independence or sunrise over the Bay of Bengal. The green background symbolizes the fertile local landscape and is also a traditional color of Islam.