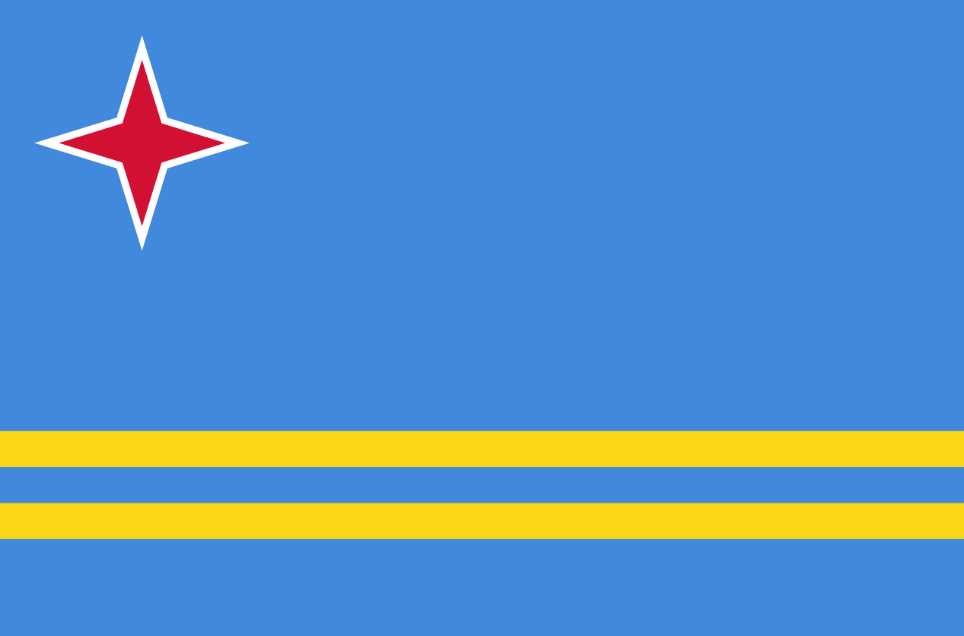 The national flag of Aruba. The colors of flag are a blue field and two narrow yellow stripes parallel to the bottom. In the canton there is a red star of four peaks with white border. The blue field symbolizes the sea, the sky, peace, hope and Aruba`s future and past. Each of the yellow stripes has its own meaning; one represents the flow of tourists to sunny Aruba, enriching along the island with tourists. The other line represents gold and phosphate minerals in the past and oil in the 20th century. In addition to the sun and gold, yellow is also believed to represent Wanglo flowers. The four-pointed star has several meanings; the four points represent the population of the origins of Aruba, And of the four main languages ​​that are Spanish, English, Dutch and Papiamento. The star also represents the island itself and the red earth bounded by white sand beaches in the blue sea. Red also represents the bloodshed of the Arubans during the war, the past of the inhabitants of India, and patriotic love. White also represents purity and honesty.

The national flag of Aruba was adopted on March 18, 1976. The multiculturality of Aruba is celebrated on March 18, when the island will become a historical and cultural scene to celebrate the day of the flag. Aruba, an unusual land where the southwest coast is surrounded by pristine beaches that have been considered among the most beautiful in the world, unites to celebrate the multiculturality that characterizes them with their more than 96 different nationalities honoring its history by celebrating the meaning of His anthem and flag on March 18.

On this important day, Aruba celebrates nationalistic displays and folk presentations at Betico Croes Plaza in Oranjestad, as well as sporting and cultural activities in various parts of the island. Also in historical places and museums of the island you can appreciate its history that shows the transformation of a people that after battling over the years with justice, order and freedom, one day proclaimed as the happiest island in the Caribbean.

Do you know about the national flag of Armenia?

The flag of Aruba was officially adopted on March 18, 1976, the same day that in 1948 Holland accepted the right of Aruba to its autonomous status within the Kingdom of the Netherlands. Since then the Dutch government continues to be responsible for defense and foreign relations and Aruba as an independent entity bases its government on the democratic principles of the West.

The destination of happiness has a particular landscape that contrasts with the beaches of Barvolento in the north of the island where its topography and vegetation becomes scabrous and wild, is the place where you can appreciate the elegance of the watapana (divi), the emblematic And famous tree that remains carved and folded towards the southeast by the imposing passage of the trade winds that year after year joins to the most important celebration of the island, the day of the flag.

The Aruba flag is composed of a blue background pierced by two parallel yellow horizontal bands, and at the upper end is a red four-pointed star with white border. The importance of the day of the flag is confirmed thanks to its inspiring meaning where the blue represents the skies and the Caribbean Sea, while yellow represents the color of abundance, where you can see the island’s past and its imposing gold industries , Aloe and oil; The red is in homage to the old wood industry of Brazil and of course symbolizes the love that every person of Aruba feels for his country, finally white is the white sand that reflects the purity of the hearts of all Arubians.

The Aruba flag meaning consists of a red star and two yellow lines. The red star represents the four compass points, as the island attracted people from all over the world. The star also represents the island itself, surrounded by the beautiful blue sea. The horizontal yellow lines denote the free and separate position that Aruba enjoys in the Kingdom of the Netherlands. Blue represents the sea that surrounds Aruba; Yellow is the color of abundance, representing the island’s past and its gold, aloe and oil industries; Red is the love that every native of Aruba feels for his country and for the old industry of Palo of Brazil; And white symbolizes the white sand beaches as well as the purity of the hearts of the people of Aruba who strive for justice, order and freedom.