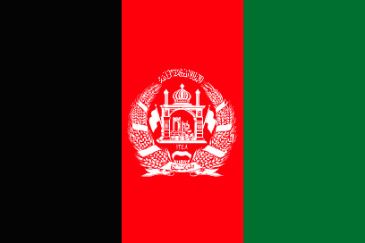 The national flag of Afghanistan was adopted on January 4, 2004, in conjunction with the new Afghan Constitution. 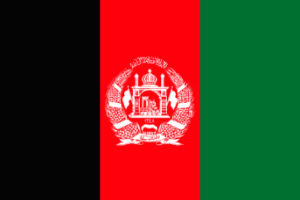 The national flag of Afghanistan consists of three vertical stripes in black, red and green, including in the center the emblem of the state in white. These national colors, first used in 1928, represent the past, the struggle for independence and progress, respectively. Afghanistan is the country that has changed the most times.

It is believed that national flag of Afghanistan have been originally created by the Afghan artist Brezhna in the time of King Amanullah. The shield has been modified several times. Today, the Afghan national emblem in the center of the Afghan flag is white. The emblem contains the following elements: A mosque representing the main religion of Afghanistan, Islam. A mihrab with a prayer carpet looking towards Mecca; The Shahada, written in Arabic, which is the first part of the five pillars of Islam, “There is no god but Allah, and Muhammad is his prophet.” Below the Shahada are the words “Allah Akbar,” which means “God is great.” Two flags are attached to the mosque, and they are flags of Afghanistan. In the book under the mosque is written”

In the center of the flag, in white color is the shield of the same, it is confirmed by a mosque, that is the typical representation of the Afghan religion, to each end of the mosque two flag are appreciated that are of the Republic.

Inside the mosque you can see the minrab, with a carpet in the direction of Mecca, to pray. In the shield the following expressions can be observed: – There is no God but Ala, -God is great, phrases that are iconic in Islam, in addition to it the inscription of 1928 is noted.

The mosque is within a rising sun, and the word Afghanistan is surrounded by golden spikes, as if they were tapes; as we are referring to all the shield is in white, this flag is the current one of Afghanistan, being resolved for the year 2003, product of the establishment of a new legal order.

Brief reference to the Republic

The Afghan Republic has the stamp of being one of the countries that has made the most changes to its flags; however, the modification has been appreciated inside, since in terms of their shapes and colors these have remained unchanged over time.

Afghanistan is located in Central Asia, is known for its permanent inconvenience to its neighbor Pakistan, problems that were initiated for political reasons and that until today are still dormant, they consider that they have generated fights that have claimed many victims, as well As countless goods.