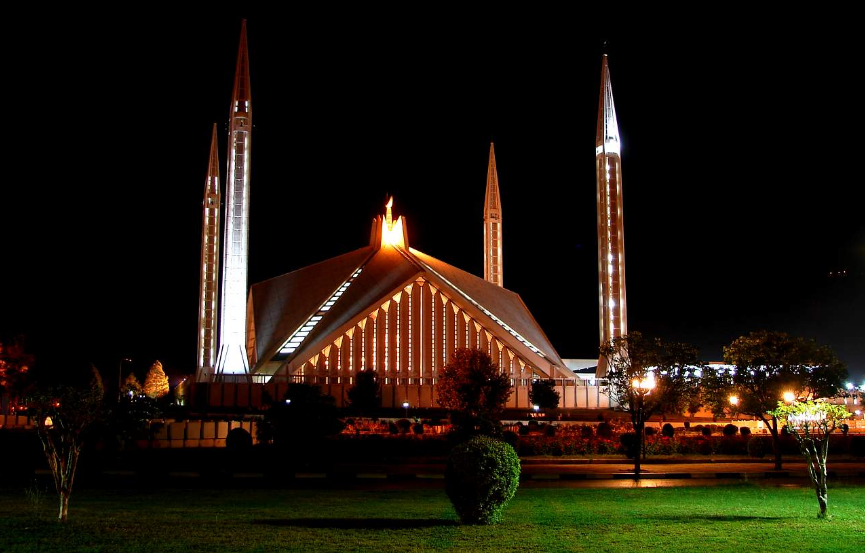 Islamabad is the capital city of Pakistan , located on the Potwar Plateau in the north of the country. Was built during the 1960s as a planned city to replace Karachi as a Pakistani capital, its name in Urdu means: “Inhabited by Islam.”

History
The area where Islamabad is located has historically been part of the Punjab and North West Frontier crossroads .

The emergence of the city has its origins in 1946 when Pakistan became independent of India, which resulted in hundreds of thousands of people seeking refuge in Karachi, which was the city chosen as the capital of the new country. As a result, the population grew explosively and by 1950 its population had risen from half a million inhabitants to two million.

The extraordinary growth of the population of this city brought the clash between different ethnic groups by which the government of Pakistan under the direction of the president Ayub Jan decided that Karachi would not continue being the capital of the country, since it had become a city Too unstable socially and politically to install the government in it, furthermore stated was not located in a central point of the country and they defined that the new capital of Pakistan would be called Islamabad, the “city of Islam “, that would be erected like symbol of a Young and progressive Islamic state.

Do you want to know about Capital City of Oman?

In the 1960s the city was built to replace Karachi as a Pakistani capital, for which the development of the country was concentrated in that city and President Ayub Jan wanted to establish a more equitable distribution. For its construction was chosen an area next to the old city of Rawalpindi (an old capital), which was designated temporary capital. Jan was interested in this location since Rawalpindi was a garrison town loyal to his government.

In 1965, the University of Islamabad and the Quaid-i-Azam University were built.

On October 26, 1966, the city came to life as it occupied the first office building in the city.

In 1967 the city of Islamabad officially becomes the capital of Pakistan. Islamabad is a modern and clean city, especially if compared to the rest of Pakistani cities.

Geography
The modern city is situated on the edge of the Porhohar plain, south of the Margalla hills and only 14 km northwest of Rawalpindi, showing the country’s past and present. The historical ruins of the ancient Taxila are located 30 km northwest of the city.

The city has an extreme climate with hot summers with monsoon rains that occur in July and August, and rather cold winters that make it snow in the hills.

The microclimate of the area is regulated by three artificial lakes (Rawal, Simli and Janpur Dam).


Population
The city has a population of over 805,000 inhabitants
Districts
The city is divided into eight zones or sectors depending on their utility among which stand out:

The diplomatic and government zone, the residential area, the commercial district, the educational area, the industrial zone and the recreational areas where there are plenty of shops dedicated to leisure and parks.

Architecture
The city features both modern and ancient architecture, with the Saudi-Pak Tower being a good example of this.

Other significant buildings of the city are the National Assembly building (designed by Louis I. Kahn), the House of Pakistan, where the President resides, and the Botanical Gardens. The most notable, representative and famous monument or building in Islamabad is the huge Faisal Mosque, known for its unique architecture and enormous dimensions. The cost of construction was covered by King Faisal of Saudi Arabia .

471
what National Day Is It Today