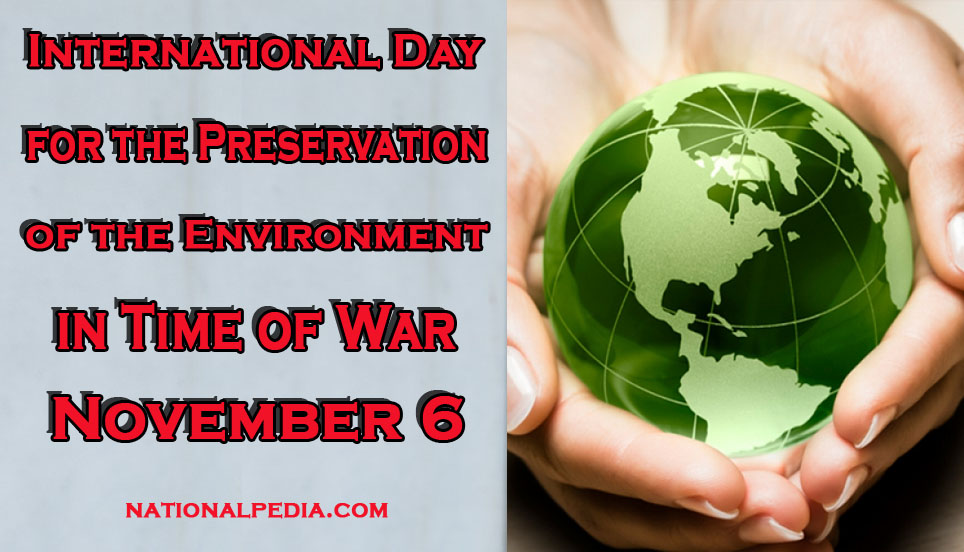 We are going to share today is what national day ?  On the occasion of the International Day for the Preservation of the Environment in Time of War and Conflict, on 6 November, the Secretary-General of the United Nations wished to convey his message.

Since the war, the environment and natural resources have been the silent victims. Harvests are burned, polluted wells, poisoned soils and killed animals. The objectives are not always the same: one may want to obtain a strategic advantage, demoralize local populations, overcome resistance or simply feed its soldiers. But even when they are not intentional, the consequences are always catastrophic. We are witnessing pure and simple acts of destruction, including the release of pollutants and hazardous substances. We are witnessing social upheavals, such as the creation of refugee populations, which in turn are putting more of the resources to work.

During the 1991 Gulf War, Kuwait’s oil wells were deliberately burned and millions of liters of crude oil were dumped into waterways. In Cambodia, 35% of the forest cover was destroyed during the 20 years of civil war and unrest. During the conflict in Angola, the number of wild animals decreased by 90%, and during the Vietnam War millions of tons of agent orange were sprayed over the jungles of that country. to strip vegetation of vast areas, some of which still can not be cultivated today.

The environment is protected in time of war by a number of legal instruments, including the Convention on the Prohibition of Military or Any Other Hostile Use of Environmental Modification Techniques (1976), the Chemical Weapons Convention and the Convention on the Prohibition of Antipersonnel Mines (1997). In addition, Additional Protocol I to the Geneva Conventions prohibits the use of “methods or means of warfare which are designed to cause, or may be expected to cause, extensive, lasting and serious damage to the natural environment “and states that” war will be conducted while ensuring the protection of the natural environment from widespread, lasting and serious damage “. But what is sorely lacking, these are the mechanisms required to ensure the application of these Conventions. Indeed, we may need to strengthen the “green” chapter of the rules of international humanitarian law.

At the practical level, the United Nations is responding more and more actively when war results in environmental degradation: it seeks to assess damage, clean up contaminated areas and help countries to acquire ways to manage their post-conflict environment. This is what the United Nations Environment Program has done in the Balkans and it is doing it today in Afghanistan, Iraq, Liberia and the Occupied Palestinian Territory.

Modern warfare and armaments technologies continue to develop rapidly, which could have catastrophic consequences on the environment. At the same time, too many conflicts are allowed to worsen for years, or even decades, and gradually exhaust natural resources. As we celebrate the International Day for the Prevention of Environmental Exploitation in Times of War and Armed Conflict, let us realize that no war and no conflict takes place too far to have an effect on our environment, wherever we live. And let’s make a commitment to do what we can to fight this common yet often forgotten threat that puts our lives and well-being at risk