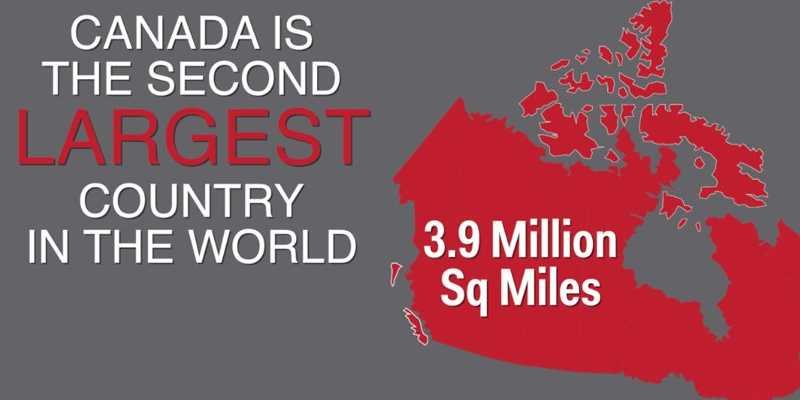 Canada has a lot of great things in abundance, like hockey players, parkas and Tim Hortons franchises. Did you know that we have more lakes than any other country in the world? That’s right. The Far North has 563 lakes more than 100 km wide. And just to them, the Great Lakes contain about 18% of the fresh water in the world. It’s a lot of water! It is to wonder if our allied countries are simply thirsty!

If you’ve ever had to get your car out of your cold garage doorway when you leave for work or put on a thermal nose guard, you know it can be very cold in Canada. The average temperature in January in Ottawa, Ontario is -14.4 C (6.1 F). We can say that it’s cold! By cons, 3 February 1947 in Snag, a small village in the Yukon, a temperature of -63 C (-81.4 F) was recorded é e. It’s about the same temperature as on the surface of Mars.

Larger than the European Union

Has anyone ever asked you if you knew Joan from Vancouver or Paul from Toronto when you told them you were from Newfoundland? The immensity of our country seems to be unknown to foreigners. Here are some interesting facts: Canada is larger than the entire European Union (33 times larger than Italy and 15 times larger than France), 30% larger than Australia, 5 times larger than Canada. Mexico, 3 times bigger than India and about the size of 81,975 Walt Disney Worlds glued together. So, in other words, no, you do not know Joan or Paul.

The most northerly inhabited place on the planet (Nunavut)

There are no movie theaters or malls, but Alert is the place where military and scientific personnel working in this area live temporarily. In July, the hottest month, the average temperature is 3.4 C (38.1 F). In January, the coldest month, the temperature plunges to -32 C (-26 F). No wonder the place is called Alert!

If you walked without stopping, without eating, without sleeping, and without resting your feet, it would take you four and a half years to walk from one side of the coast to the other. We do not think of images of blue water and white sand beaches, but Canada has the longest coastline in the world. Canada is bordered by three oceans: Atlantic, Arctic and Pacific. Canada has 202,080 km of the world’s total of 356,000 km of coastline on the planet. The second country is Indonesia with 54,716 km.

Everyone knows we have a lot of trees, but did you know that Canada has 30% of the world’s boreal forest and 10% of the world’s forests? An incredible 396.9 million hectares of forests are found in Canada. About 68% of Canada’s forests are conifers. The good news: Most forests belong to the public domain.

The only fortified city in North America

Quebec City is special and unique in Canada (and the United States): it is surrounded by walls. Quebec is the only city north of Mexico to be fortified. The Fortifications of Quebec were built between the 17th and the 19th century first by the French and, later, by the English.

The historic district of Quebec, including the ramparts, has been declared a World Heritage Site by UNESCO.

A lot of bitumen

It’s thick, sticky and Canada has about 176.8 billion barrels. The ‘ asphalt, a semi-solid oil source, is found in large quantities in the oil sands in Canada.

It is estimated that there are approximately 249.67 billion barrels of bitumen in the world and Canada has about 70.8% of that amount. That’s four times more than Kazakhstan and six times more than Russia.

Canada is so big that even our parks are larger than some countries. Take the Nahanni National Park Reserve in the Northwest Territories with its huge falls. It covers an amazing 30,050 square kilometers ed is greater than Albania and Israel ë l. Wood Buffalo National Park in Alberta is even larger with 44,807 square kilometers, which is larger than Switzerland and Denmark.

The strongest current in North America

If you ever visit Seymour Narrows in BC, put on your life jacket and get ready for the swim of your life. The Discovery Passage has some of the strongest currents in the world with recorded speeds of 17 km / h and ebb of 18 km / h.