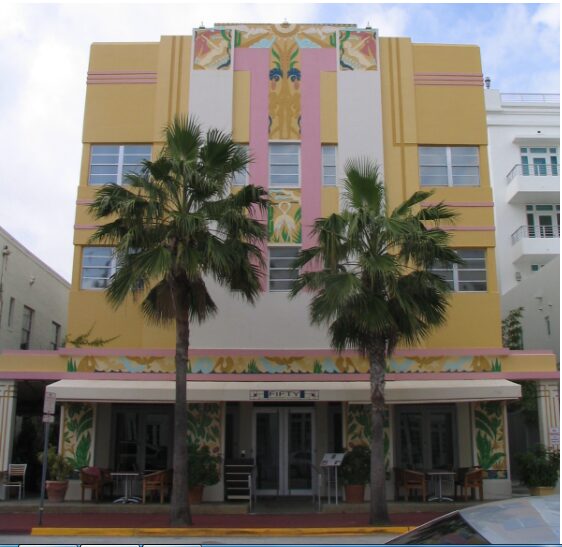 Nobody visits South Beach, Miami without taking a few pics for social media. When taking yours, head for these 3 examples of Fantasy Architecture that will make your snaps stand out.

What is Fantasy Architecture?

Before the modern era, fantasy architecture was something indulged in by queens and ancient Egyptian pharaohs around the globe. It was the pastime of uber-rich over-indulged, imaginative, slightly eccentric people in the upper crust of society. It was fanciful and wasteful and very delightful to behold.

Marie Antoinette was a patroness of fantasy architecture, with her Laiterie, an elaborate milkhouse her husband had built for her behind Chateau de Rambouillet. She had found the hunting lodge boring and drab, so the pleasure-milkhouse was built to get her to visit the hunting lodge with him.

Other historical examples of fantasy architecture are the country retreat of Catherine the Great, and tombs of the ancient Egyptians. But how about today?

Today, designers of resorts uphold the tradition of fantasy architecture, which you can see embodied everywhere from Adirondack-style lodges in rustic settings to hokey motels from the 1960s with tee-pee themes, or just about anything on the strip in Las Vegas. 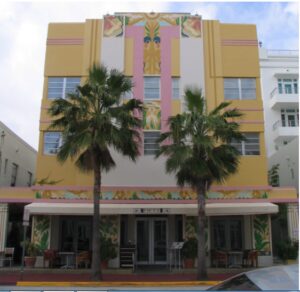 The Delano hotel was built in 1949 and has always been an immediately recognizable shape in the skyline of South Beach Miami. Its wing-topped shape is unmistakably unique, and also very beautiful. It was renovated in 1995 by renowned French hotel decor master Philippe Starck and now the inside is as breathtaking as the outside. It’s swanky and gorgeous. The tone is quiet, dramatic moody corners freshened up with live lilies, artistically placed lighting and dramatic furniture shapes and scales. As gorgeous and swanky as it looks, it still makes you feel comfortable and casual.

The lobby is designed to entice guests to socialize and feel comfortable. There are all types of seating arrangements and corners to sit in while chatting, and gathering with new friends or old friends will be easy and comfortable, as well as photogenic. The entry incorporates a grand scale terrace overlooking the beautiful pool and gardens.

The fantasy architecture theme is carried through with furnishings which appear in unexpected places, in unexpected sizes, and in unexpected pairings with seemingly mismatched styles. However, it all comes together in a fantastical, sophisticated, grand style befitting The Delano.

The Tides opened in the mid-1930s and was designed by L. Murray Dixon, who was a prominent architect at the time. The building was ten stories tall, which made it the tallest building in South Beach Miami at the time. Today it is still the tallest original building on Miami Beach.

The Tides was renovated in 1997 by the company Island Outpost. The original hotel had 115 rooms, and after the 1997 renovation, there were 45 rooms and suites. Needless to say, rooms are much bigger now! The renovation left intact the original terrazzo floors, which are the most beautiful in South Beach, according to lots of people.

The restaurant is a top-level quality establishment with four Diamonds in the AAA rating system. Called 1220, the restaurant offers to dine on the terrace facing the ocean, where dining guests can watch the people go by on Ocean Drive.

The Hotel is another hotel designed by L. Murray Dixon in the 1930s, although it was originally called the Tiffany Hotel. Like The Tides, it was also renovated in the late 1990s. Today this Art Deco hotel has a rooftop pool and courtyard dining, as well as a fabulous renovated 1960s style interior designed by fashion industry giant Todd Oldham.

Take your pick — any of these three amazing spots on South Beach make perfect backdrops for your Insta-worthy photos. Visit, explore, snap, and post… but most of all, have fun!