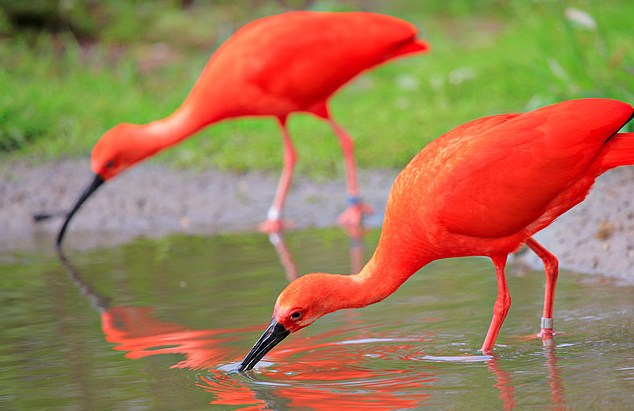 The National Bird of Trinidad and Tobago is Scarlet Ibis. This bird has brightly colored absolutely stunning is a remarkable sight to see. Although only appearing naturally in South America, you can see around the world in zoos. It is renowned as Flamingo locally and mostly living in the Caroni Bird Sanctuary in the Caroni Swamp. This is the place that is set by the government for the protection of this colorful bird along many other beautiful species. Thousands of Scarlet Ibis are frequently seen during the daylight and huge numbers of Scarlet Ibis nest and roost in the Sanctuary. During breeding season, from April to August, we can also meet Scarlet Ibis in large scale.

The Red beautiful national bird of Trinidad and Tobago Scarlet Ibis is a resident of South America and some places in Caribbean islands. It could also found in Argentina, French Guyana, Guyana, Colombia,Suriname,Venezuela and Brazil, Trinidad and Tobago. They are the most productive in the plain region, an area of western Venezuela and eastern Colombia.They live in wetlands and other coastal areas. But they also found in marshes, coasts, mangroves, swamps and tropical jungle. They will come around the opening of fresh and salt water.

Do You Know Fish Eagle is the National Bird of Zambia ?

Scarlet Ibis is bright red in color. The length of Scarlet Ibis varies and roughly in between 56-61 cm. The males are slightly larger than females and so therefore the weight of male Scarlet Ibis are about 650g to 1.4 kg. The wing spans are measured about 54cm. The wing tip is different in color with the natural color of Scarlet Ibis and mostly it found in black. Youngsters got something to mix gray and black around the body. Scarlet Ibis has long legs and long neck like other walking birds, but their hot red color is different from other shorebirds across the world. When Scarlet Ibis secondly loses its outer layer it becomes to change from black and gray to bright red. This red color comes out from its diet, which is strongly focused on red crustaceans. This process took about 2 years for its completion.

These birds reach 16-20 years of age in the wild areas. Under observation, the average age seems to be 20 years. Only one bird once, touched a record age of 31 years.

Due to the mean of safety and security they live in colonies which may generally consist of about 30 birds. Sometime if needed or in case of protection it may overlap and swell to thousands. They stress well upon their safety and defense and therefore linked with storks, egrets, spoonbills, Ducks and herons during feeding or flying.

Scarlet Ibises usually fly in V-shape format, this helps in flying and becomes easier and very rarely the bird at the front transform the tiredness that this bird experience, while flying the neck and legs are expanded and pushed forward. Scarlet Ibis is very sensitive birds; they can hunt small creatures like crustaceans, insects, dogs, fish, frogs, big cats and birds of prey. 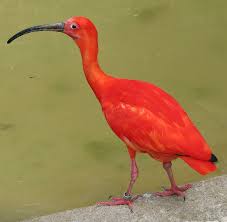 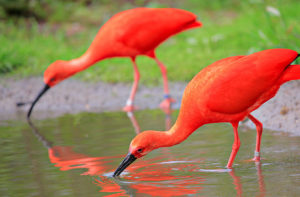 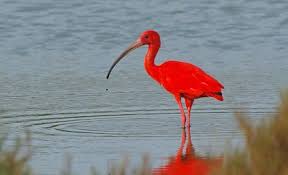