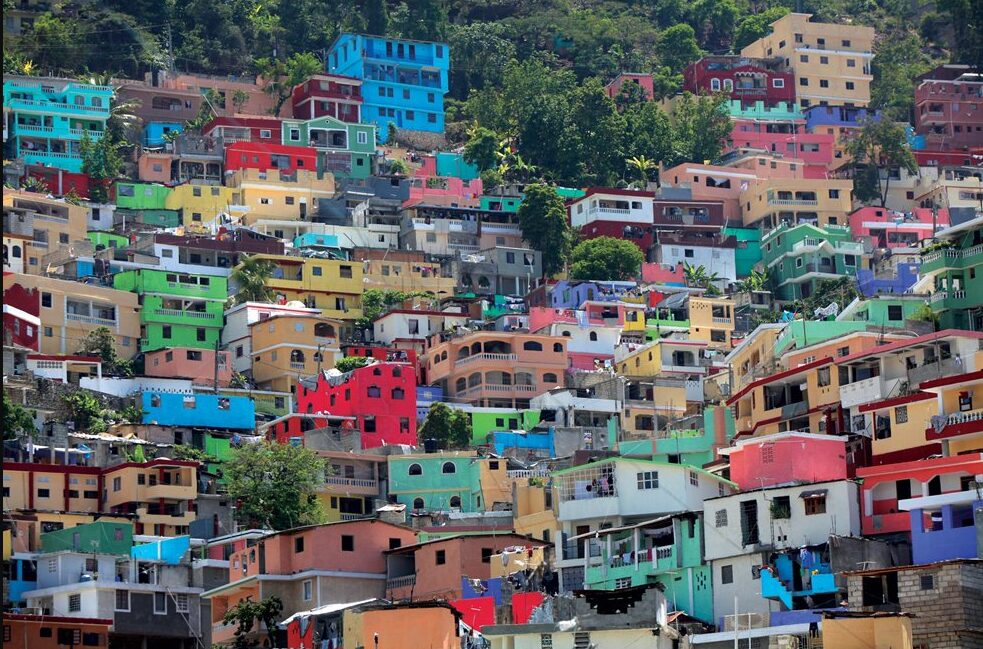 The capital of the Republic of Haiti is Port-au-Prince, founded by the French in 1749 on former smaller settlements, named after the ship “Le Prince” commanded by Monsieur Saint André who docked in the port of the city situated between the Gulf of Go nave and The Bay of Port-au-Prince.

The capital of the Republic of Haiti is Port-au-Prince. Capital of the French colony of Santo Domingo from 1770 to 1804, when Haiti gained its independence became capital of the new state, and during the revolutionary period was baptized Port-Republican. Today it is the economic, judicial and governmental center of the country and the most important port in Haiti, as well as the main city of the Western Department and the headquarters of the Archdiocese of Port-au-Prince. With about one million inhabitants, it houses the State University of Haiti, the National Library, the National Museum, the Archaeological Museum and the Art Center.

The capital of the Republic of Haiti is Port-au-Prince this island country is part of the Spanish, west of the Dominican Republic and between the Caribbean Sea and the North Atlantic. Haiti has 1,771 km of coasts and 360 km of border with the Dominican Republic. One of its lowest points in Haiti is at sea level. Its highest point is in the mountain range Chaine de la Selle at 2,680 m. There are no navigable rivers. The largest lake is Etang Saumâtre, a saltwater lagoon located in the southern region.

It occupies the western part of the island Hispaniola, which shares with the Dominican Republic, in the Caribbean Sea or the West Indies. It is distinguished by two peninsulas (the one of Saint-Nicholas to the north and the one of Tiburón to the south) that form the gulf of the Gonave. Among other islands that belong to Haiti are those of Gonave and Tortuga.

National Palace of Haiti before the earthquake that completely destroyed it in January of 2010.

It is amazing to know that such a small country has a diversity of cultures and ethnicities, sure to enter the territory of the country people are greeted with a fantastic welcome, as are referred to with extraordinary courtesy.

The culture of Haiti shows traces of mestizaje between the French, Spanish and African European traditions, due to the slave trade from which the majority of the population comes. There remain some traces coming from the culture of the Tinos, first inhabitants of the island. Most Haitian literature is written in French. Currently, the name of authors who write in Creole is progressively increasing.

Do you know about the capital city of Guatemala ?

Haitian food has its origin in the various culinary styles of the ethnic groups that have passed through the western part of the island of Hispaniola since its discovery. Among these ethnic groups are the French, the Africans, the Amerindians Tainos and the Spaniards. Similar to the rest of Latin Caribbean countries however it differs in different points in its regional presentations. Its main influence derives from the French Food, and the African Food, with notable derivations of the culinary technique of the Taino natives and of the Spaniards. Like other culinary styles of the region, it gives a native taste by itself and that seems to attract many visitors to the island. Haitians often use peppers and other strong flavors. Haitian cuisine is considered as moderately spicy, Not very tasty and not very spicy. In the country, however, many foreign executives have begun introducing various foreign kitchens into Haitian culture.

The level of biodiversity with which this region counts is still high for tropical areas. Although species numbers are lower in the Insular Caribbean , in most of the islands, especially the larger ones, there are high levels of endemism. As a whole, the Caribbean has a generic diversity of hermatypic corals considerably smaller than most of the tropical Indo-Pacific, however, it has the largest number of endemic genera in the world, which is logical due to the geographic isolation that Separates it from other important coral reefs. The region is especially rich in large mollusks and crustaceans, ranking second in number of endemic lobsters. In this region is the second largest coral reef in the world,

Due to the extreme political, economic and social circumstances experienced by Haiti in recent years, its tourist infrastructure is not fully developed, making it difficult to find activities to do outside hotels. Little by little the cities are recovering the normality and with her the places that at the time hosted some social activity begin to recover it. Such is the case of the area of ​​Pétionville, where it is possible to enjoy a nightlife with acceptable offers to practice salsa or meringue.

Haiti has the lowest per capita income in the Western Hemisphere, and is the poorest country in the Americas. Social and economic indicators place Haiti in downward positions behind other low-income developing countries (particularly in the hemisphere) since the 1980s. Haiti ranks 145th out of 177 countries on the Human Development Index UN . Approximately 70% of the population lives in poverty.

About 70 per cent of Haitians depend on agriculture, which consists mainly of small-scale subsistence agriculture and employs about two-thirds of the economically active population. The country has had very few new jobs since President René Préval took office in February 2006, although the informal economy is growing. The failure to reach agreements with international sponsors has prevented Haiti from obtaining assistance with a budget and development programs.

There are two characteristics of this city. The first is the high level of mortality due mainly to AIDS , the life expectancy in men is around 48 years and women over 51. The other aspect to be taken into account is that almost half of The population practices voodoo