National Flag of Samoa was officially adopted as the National Symbol in February 1949. Red with a blue rectangle in the upper quadrant of the hoist-side bearing five white five-pointed stars representing the constellation of the Southern Cross. 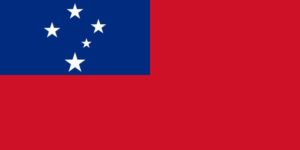 The red color in national flag of Samoa represents courage. Blue liberty and white represents purity. The five stars symbolize the constellation of the Southern Cross, Alpha, Beta, Gamma, Delta and Epsilon, which is the smallest because it does not shine as much as the other stars in the constellation.

In 1900, the national flag of Samoa was adopted by German Samoa, whose flag was a tricolor, which was equal horizontal stripes black, white and red. This flag lasted until 1914.

Then the Samoa area came into possession of New Zealand, and the flag was a blue quadrangular panel. His top room near the staff contained an image of the Great Britain flag, and four red five-pointed stars with a white outline of various sizes located on it. The country became known as Western Samoa.

On February 24, 1949, the state received the current design of the Samoa flag.

The Flag of Samoa under the laws of the country can be used for all purposes and on the water and on land as the organs and officials of the state, and citizens of the state.

It has a classic rectangle shape, which accepted the vast majority of world powers. The width of the flag to its length in a ratio of 1: 2. The main field of the flag of Samoa – bright red. The upper quarter of the flag closest to the mast, is painted in a bright blue color. In the quadrangular blue field it shows five white stars of five points of diverse sizes. These stars have found their place in the arms of Samoa. 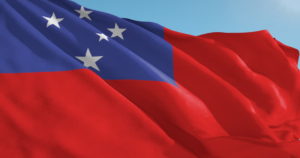 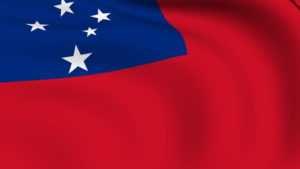