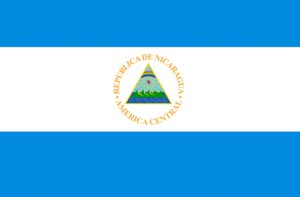 The national flag of Nicaragua is made up of three horizontal stripes of the same width, two of blue in the margins – meaning justice – and one white in the center meaning – which means purity and integrity -, colors inherited from the old emblem of the Federation Of the United Provinces of Central America, created as a result of its separation from Spain in 1821.

Do you know about National Flag of New Zealand ?

On the white side of national flag of Nicaragua there is centered fringe is the national shield, an equilateral triangle that encloses the figure of five contiguous volcanoes that emerge between two seas-representing the five Central American republics-, a rainbow-like symbol of peace- and a Phrygian cap radiating Lights-freedom-The triangle is surrounded by two legends that say: ‘Republic of Nicaragua-Central America”

Before the countries of the isthmus became independent until today, 12 different flags waved in Nicaragua. However, historians only recognize the last four that are the ones that had the country, once it became independent. The national flag is the emblem and representation of the Nicaraguan homeland the 5 of September of 1908, was definitively fixed 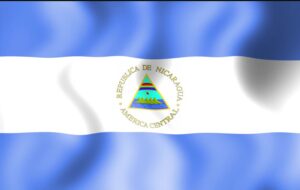