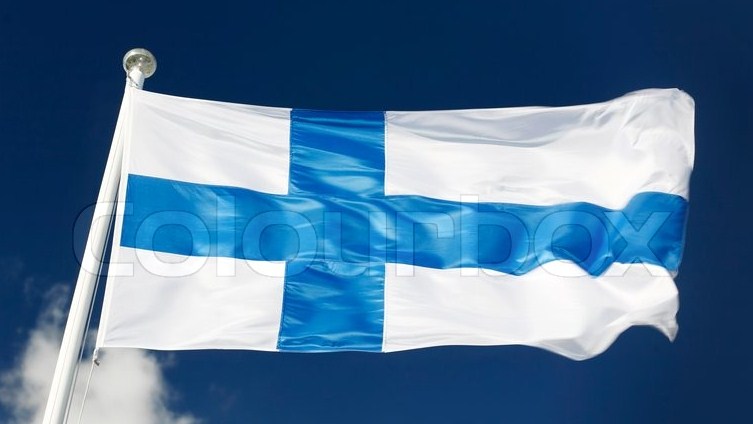 The national flag of Finland is officially in use since 1918, consists of a blue cross on a white background. It has two basic versions: the national flag (civil) and the state flag.

In the national flag of Finland the white color symbolizes the snow and the blue the lakes and the sky. The cross is longer than the Swedish or Danish flag, as it measures 3/11 in height and 3/18 in width. The state flag is used by government institutions. This flag bears the national shield in the square formed at the intersection of the bands of the cross. The President of the Republic has its own variation of the flag, as well as other institutions, such as the Navy.

The current national flag of Finland, also known as the Flag of the Blue Cross, was designed at the beginning of the 20th century. The blue cross on the white background is the representation of the Christian Cross, the only difference between the civil and state flag being the coat of arms worn by the latter. The same flag but with the peaks of “swallow tail” is the emblem used by the Finnish army.

Did you know about the National Flag of Fiji ?

The fact of representing the cross, which shares with Sweden, was decided after the declaration of Independence of Russia, when the Finns claimed a flag of their own. The blue is representative of the lakes and the sky, while the white is of the snow, so present during the winters in Finland. In addition, this combination has given rise to other provincial and military flags.

The first design for the flag was designed and presented in 1848, along with the National Anthem (Maamme), and in principle it was the Finnish arms emblem on a white background and adorned with a laurel wreath. Curiously, the current flag of the country was first used by a Helsinki yacht club, the Nyländska Jaktklubben, although with some small differences. Some say it was inspired by the Russian emblem of the Marine Corps.

After the declaration of independence of Finland, in 1917, a call was made to design the new flag of Finland, being chosen two possible combinations among the many presented. One of them contained the coat of arms on a red background and a yellow cross, while the other was the one we see today in blue and white.

As a matter of curiosity, it must be said that one of the other candidates, who presented diagonal stripes in blue and white was rejected because it looks more like a barbershop than a country, according to the evaluation committee. Another one of them was it to look in excess to the Swedish flag, equal but with the white cross on blue background. The winning design was presented by Eero Snellman and Tuukkanen Brun, although modifications were made twice, in 1922 and in 1978. Their proportions are 11:18, 11 being the height and 18 the width, approaching the famous proportion (Based on the Phi number).

As for the use of the flag, the law states that the National Flag can be used by ordinary citizens, municipal bodies and organizations and regional, being the right of any Finn to display its flag. The use of the official flag (11:18) is limited to governmental organizations, both provincial and national, while the “swallow tail” is used by the Defense and naval forces. As for its use by private entities, it is limited to official flag days.

The time to raise the flag in Finland is at 8:00 in the morning, and it is made at its descent twelve hours later, with the deadline being 9:00 pm. In the event of a tragic event, it is the Ministry of the Interior that orders the flags to fly at half-mast. On St. John’s Day we have an exception, since the flag is hoisted at 6:00 a.m., this being the official day of the Flag of Finland.

The laws of Finland prohibit a series of acts in relation to the flag, such as its irreverent use, its deformation in some way or remove it from the flagpole without an official consent, leading to fines for disrespectful treatment of the national emblem. It is also not allowed to add ornaments or symbols, in addition to the sale of flags that do not have the proportions and characteristics admitted and defined by law.

The rules on the correct (and respectful) treatment of the flag imply that it must be clean, in good condition (without tearing or breaks) and as in other cases, it should not come into contact with the ground. Curiously, if you have to get rid of a flag that is in poor condition (worn or irremediably dirty), it is obligatory or burn it, or cut it into small pieces. In other words, it must be completely unrecognizable. It is not allowed to be thrown away or buried. 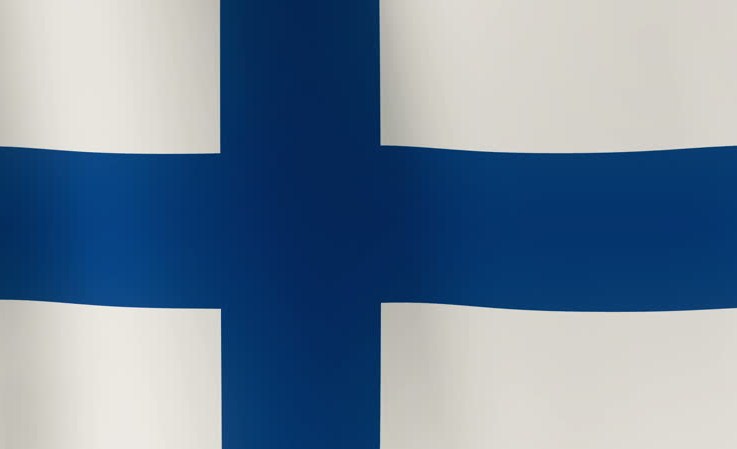