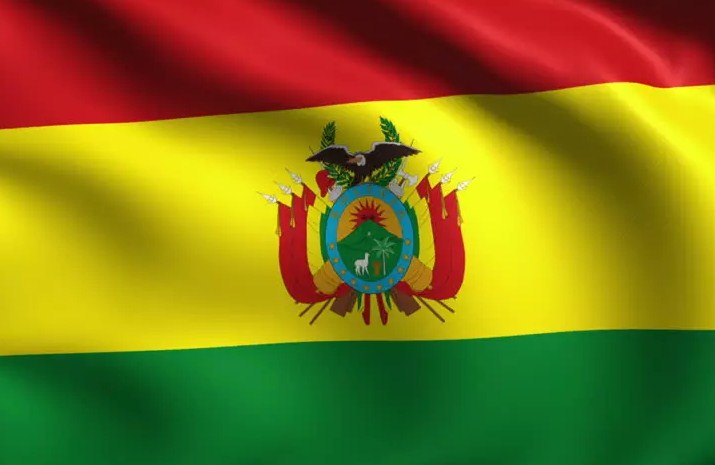 The present national flag of Bolivia governs by the Law of 5 of November of 1851, dictated in the presidency of Manuel Isidoro Belzu. It consists of three symmetrical horizontal stripes. The upper one is red (represents blood spilled by our heroes), the middle one is yellow (our riches and natural resources) and the lower fringe is green (the great richness of our nature and hope).

Created by the Deliberating Assembly of 17 of August of 1825. Three horizontal stripes. The upper and lower bands of colored green and the middle, thicker, color red. In the central strip 5 stars golden in leaves of laurel, representing the five departments that Bolivia had at the time of its foundation: La Paz, Potosi, Cochabamba, Chuquisaca and Santa Cruz.

Modification affected by Law of 25 of July of 1826, in the presidency of Marshal, Antonio Jose de Sucre. Three symmetrical horizontal stripes. Yellow top, red the middle and green the bottom. In the central (red) stripe the first Bolivian Shield appeared.

Do you know about the National Flag of Bhutan ?

The national code governs by the Law of 5 of November of 1851, dictated in the presidency of Manuel Isidoro Belzu. Three symmetrical horizontal stripes. The upper fringe is red, the middle fringe yellow, and the lower fringe green. The law of Belzu does not incorporate the National Shield in the tricolor pavilion, but the custom is imposing to place the patriotic shield in the central fringe. Three horizontal stripes of equal size comprise the Bolivian national flag of Bolivian having the ratio of 2: 3.

The upper band of color is red, the medium is yellow and the lower band of color is green. The flag of Bolivia was acquired on October 31, 1851. Prior to the independence of Bolivia in the year 1825, a number of flag diversities were found there. This is said that the meaning of the color combinations of this Bolivian flag or connotation comes from the “previous flags” of Colombia. The red color in this indicator suggests the courage and courage of the Bolivian soldiers, the green represents the fecundity of the terrain and the yellow color symbolizes the mineral resources of Bolivia.

Supreme Decree of 14 of July of 1888, regulates and uniform use of the shield and the national flag, featuring its Article 5 that the national flag has three horizontal stripes of equal width and dimensions, placed in this order: a red one in the top, a gold color in the center and green at the bottom, thus confirming the design banned in 1851 during the government of Isidoro Belzu. Flag Day: August 17th.

As mentioned, there are three Horizontal Bands in the national flag of Bolivia, make up this patriotic symbol of Bolivia: red, yellow and green.

The red represents the blood spilled by Bolivians for the birth and preservation of the Republic soldiers. It is the color of love and sacrifice.

The green expresses the immensity of forests, forests and meadows of Bolivia’s enormous potential in natural resources.