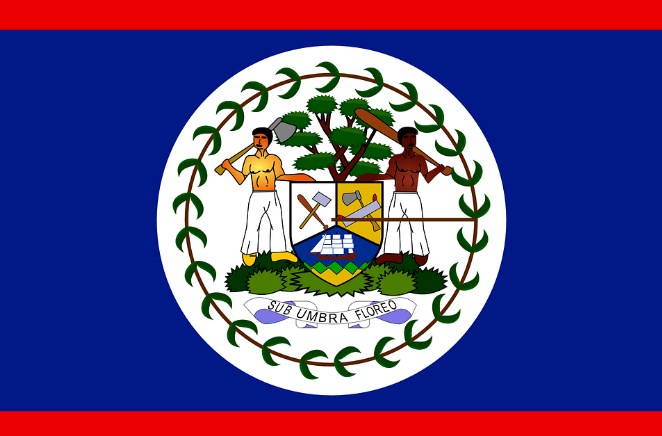 The national flag of Belize is composition of colors blue, red and white, whose central symbol is the coat of arms of the country. Belize is a Central American country, which reached its independence from the United Kingdom in 1981, the year in which it adopts its national flag. The national flag of Bilize consists of a blue background, surrounded by two red stripes, at the upper end and another at the lower end, with the shield as focal point. What each color and symbology represents is discussed below.

The United Party of the country is represented by the blue color in the national banner.

The opposing party is represented by the red color and its lines that go from end to end in the top and bottom of the standard.

It is divided into three areas, whose lower area is circumscribed by an inverted V. The two upper pictures symbolize the work of the country, the one on the left has a shovel and an ax, and both implements interlaced, and in the right frame are a saw and an ax. In both cases the work of the country’s timber industry is represented in the course of history. In the lower picture is a ship sailing the ocean.

Do you know about National Flag of Belgium  ?

In the center of the national flag of Belize is his shield; on the sides of the shield are two men with their bare torsos representing two lumberjacks, one with an ax on his right shoulder, and the other with a paddle over his left shoulder. Above the shield is a mahogany tree, a circumference of leaves skirts the shield. The Latin phrase Sub Umbra Floreo is representative of the country, and is located at the bottom of the shield on a ribbon, its translation is: under the shimmering blossom.

All these elements make up the national symbol of Belize, one of the youngest countries in America, for having reached its independence more recently.

The national flag of Belize represents the unit of Belize, has the colors red, white and blue.

The background of the flag is royal blue. There are two red horizontal borders that run from left to right. The coat of arms exists in the center of the flag. The white circle borders with a green, circular, garland flowing clockwise.

The Belizean flag has a mahogany tree on the coat of arms. The mahogany tree played a very important role in the country’s economy. Also includes two woodcutters. The woodcutter on the right holds a trowel, while on the left he has an ax. There is a shield, which shows the tools of the mahogany trade and a boat. Once again the importance of mahogany and its importance for shipbuilding are represented. The flag contains a writing “Sub Umbra Floreo”, which means “under the shadow I blossom”. In this case it probably implies “under the shade of the Mahogany tree florecemons”.

The Belize Flag contains blue representing the country’s ruling party, the United People’s Party. On the other hand, red symbolizes the other dominant part, United Democratic Party. Belize’s flag can be hoisted by government organizations as well as major non-governmental organizations. The flag is hoisted on special days such as Independence Day. It is assumed that all citizens of this country have to respect the national flag of Belize.

The Flag of Belize, as in many other cities, had some changes over the years.

From its beginnings until the year 1950, Belize had the Colonial Flag, which was always inspired in the British Honduras style, and the dark blue color, covered much more space than the symbols inside the flag. This was the time of the British Colony.

From 1950 to 1981, the flag was radically changed and called the Flag of British Honduras, although its design changes. The blue color is much clearer, practically striking and in the middle of the whole flag lies, within a white circle, the National Coat of Arms of Belize.

Said shield practically represents the construction of boats, for the wood, the wood, the oar and the two men that are represented. Underneath all this is a motto “Under the shadow I blossom”.

But from the year 1981, it was possible to adopt the flag that until today is shown in Belize, after achieving its independence. Virtually the difference with the previous flag is minimal, the Belie Shield is still in the middle, the blue color became dark again and this time they increased two red stripes, one on each horizontal side of the flag.