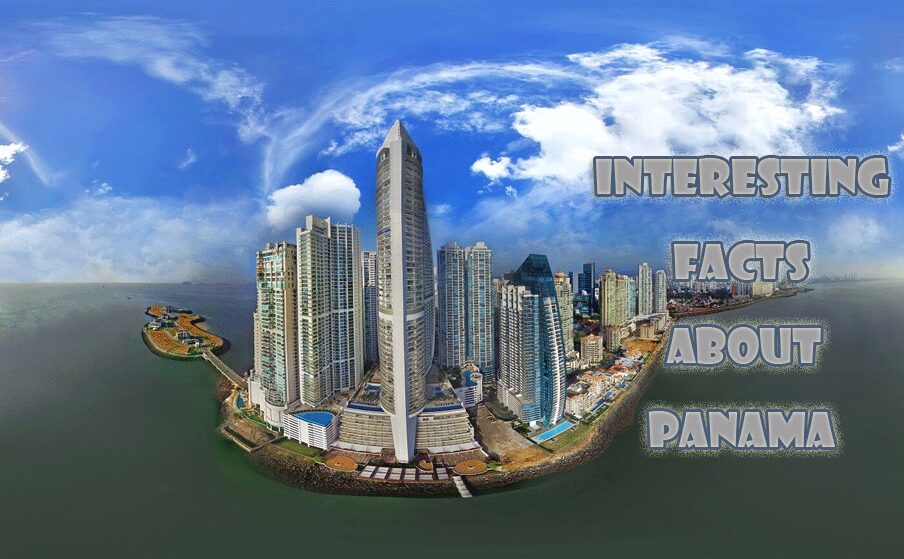 We’ve compiled this list of interesting facts about Panama that you may not have known. On August 15, 1914, officially, the ship Ancon inaugurated the Panama Canal by crossing it in its entirety, which means it’s has been 100 years since the full operation of this true wonder of the Modern Engineering, which a century after its inauguration continues to surprise locals and foreigners alike.

You can see the sunrise on the Atlantic coast, then go to the Pacific coast and watch the sunset, on the same day! So close are the coasts of both oceans in this Central American country.

This is the Trump Ocean Club International Hotel & Tower, the first investment of the Trump Organization (of the Real Estate magnate Donald Trump) in Latin America. In addition to that, of the 30 tallest buildings in all of Latin America, 20 of them are located only in Panama City! The structure of the Great Santiago Tower, located in Santiago de Chile, reached a height of 300 m on February 14, 2012, thus becoming the tallest building built in Latin America (however, while still being in full construction phase , is not yet on the list of highest operational buildings), exceeding by 16 meters its predecessor, the skyscraper Trump Ocean Club International Hotel & Tower, which was inaugurated in the year 2011 in Panama with a height of 284 m until its pinnacle (or spire in English). In Panama City, the largest number of skyscrapers in Latin America is also concentrated, with a total of forty projects that exceed 150 m in height.

Panama has multiple world records in terms of bird watching or ornithological tourism, because despite being a country no larger than the state of North Carolina, it houses more bird species than the entire United States and Canada. Together. Also, without counting the birds, there are 125 other species of animals that you can only find in Panama and nowhere else in the world.

Panama is one of the most ethnically diverse countries in the world. Its population is composed of mestizos, mulatos, Afro-descendants, whites, indigenous and of varied ethnic origins such as: Chinese (mostly immigrants from southern China), Hindus, Jews, Spaniards, Costa Ricans, Americans, Colombians, Italians, Argentines, Greeks, French, Arabs, Venezuelans, Dominicans, Chileans, among others. In addition, the country has 7 different indigenous ethnic groups. The majority of the inhabitants of Panama are of mixed races; around 70% of the population of the country is composed of inhabitants of mixed ancestry.

Ironically, the most distinctive symbol seen by tourists in Panama is the famous “Panama Hat”, or simply called “Panama Hat” by Anglo-Saxon tourists. It is a traditional hat with the wing of Ecuador, which is made of the braided leaves of the straw hat palm (Carludovica palmata). Despite the common name of “Panama Hat”, these are native and manufactured in Ecuador; its name comes from the fact that they became relevant during the construction of the Panama Canal when thousands of hats were imported from Ecuador for the use of construction workers. When Theodore RooseveltHe visited the Panama Canal, was photographed using said hat, which increased his popularity. It is believed that this perpetuated the reference to it as “Panama Hat”.

After the excavations for the construction of the Panama Canal, hundreds of thousands of cubic kilometers of earth and rock derived from the excavation work were transported to different points of the Panamanian geography. So much was the material that it reached so that an island was turned into peninsula, with the creation besides the breakwater of the Island of Naos. With another part of the material, the town of Balboa and the military fort of Amador were built. Even so, huge amounts of surplus land were thrown into the jungle.

With a real cost for the time (construction began in 1850, taking its first full trip in 1855) of almost 8 million dollars, the Panama Canal Railroad was the most expensive to build in all of history. It is the oldest fully operating train in the world, transporting passengers and cargo from the city of Colon on the Atlantic coast to Panama City with coasts in the Pacific, back and forth on a constant basis.

The strip, stopper or simply the so-called Darien Region , is an almost impenetrable jungle area between Panama and Colombia , which has the distinction of being the only point in the Americas where the Pan-American Highway is interrupted. The Darien RegionIt is known for its guerrillas, illegal traffic and contraband, dangerous terrain of mountains and swamps and dangerous wild animals. Because there are no terrestrial communication routes that cross the zone (mainly because it is the part where the Pan-American Highway is interrupted, which connects most of the countries of the American continent), it has been called the Darien plug. Some of the reasons why it has been chosen to maintain this natural plug between the continents of South and Central America, and consequently towards North America, have been among others to protect the natural jungle (by the way, PanamaIt has the second largest area of ​​Selva Frondosa in the world, just behind the immense Amazon region, which is spread across 8 countries, something incredible considering that Panama is such a small country). Other reasons for its conservation are to contain the spread of tropical diseases, protect the habitat of the indigenous people who inhabit this area, prevent drug trafficking and the violence associated with it, just to name a few. To mention an example case of having tried to unite this area of Panama with ColombiaWhen the Pan-American Highway was tried to cross through this area, in less than a decade the area was the victim of indiscriminate deforestation, so first of all it was decided not to give rise to that problematic section of the route.

From 1919 to 2004, Panama had its own version of “Alcatraz” , the infamous jail located on an island off San Francisco Bay in the United States, housing the most dangerous criminals of the time during the which worked In parallel, Panama had its jail on the island of Coiba (nowadays Coiba National Park), in the so-called Gulf of Chiriquí on the Pacific. The institution housed, like its American counterpart, the most dangerous criminals in Panama, until it was suppressed by the government. After this, Coiba, as well as the 38 other islands that surround it, were proclaimed World Heritage of Humanity by UNESCO . Today, the island can still be found in its natural state, with guided tours to the old prison for tourists and onlookers. Although rumor has it those ghosts of former prisoners live in it. For those adventurous who dare, one can spend the night on the island where there are still the remains of the prison, in the Ranger Station of the ANAM (National Environmental Authority) of Panama.