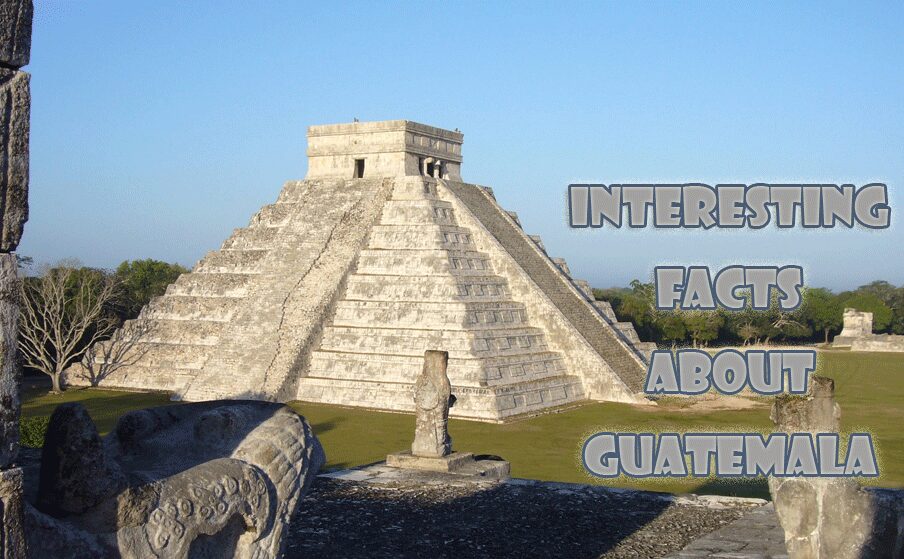 There are several reasons why Guatemala is characterized as a unique and unique country, making it a country that in its history there are several interesting facts about Guatemala that probably not all know. That is why the Internet page 10 Facts About who are dedicated to investigate data on different topics, made a publication on the data that characterizes Guatemala.

The name Guatemala has its meaning from the Náhualtl language, which is translated to Quuahtlemallan meaning “place of many trees” or “land of trees”, a name that fits perfectly, since it has large forests and several mountain ranges that cover the country with its branches. It is also known as the “country of eternal spring”, since in most of the year its climate is temperate in certain sectors of the country.

Guatemala is divided into three regions according to its unit of relief, the first being the plains of the Peten region, then the Highlands of the central region and the southern coastal plains. Likewise, Guatemala is divided into eight other regions according to its territorial location, the metropolitan region, the north, the north-east, the south-east, the central, the south-western, the north-western and the Petén, each comprised of several departments.

Guatemala became independent from the Kingdom of Spain on September 15, 1821 with the signing of the Declaration of Independence drafted by José Cecilio del Valle. In the Act of Independence the foundations of a new regime were set, as for example those representatives would be elected by the Provinces to form the Congress of the nation, as well as the creation of a Constitution.

The official language in Guatemala is Spanish, but it has a variety of languages ​​spoken around the country, which number around 25 languages. Among which, for example, Garífuna and Xinca received official recognition after the Peace Accords, recognizing this as a multilingual country and it is stated in the Constitution that languages ​​should be respected and disseminated.

The capital city is Guatemala City, which is the most populated city in the country. Its official name is the Nueva Guatemala de la Asunción, and it is the seat of the three governmental powers of the country as well as the Central American Parliament.

The United Nations Educational, Scientific and Cultural Organization -UNESCO- has a list of World Heritage Sites or World Heritage Sites, which are irreplaceable assets of each nation which are protected for this organization. Guatemala has the largest collection of sites considered as heritage of humanity among them is Antigua Guatemala, the Tikal National Park and the Ruins of Quiriguá.

The national flag of Guatemala is formed by three stripes, the two blue exteriors and the one in the middle with the national shield in its center. The two vertical stripes of blue sky that symbolize justice, loyalty and the country’s sky as well as representing the Pacific Ocean and the Caribbean Sea, the two bodies of water that are on the border of Guatemala. The white symbolizes purity, integrity, firmness and the nation.

During Mayan times in Guatemala, the first chocolate bar was invented, since cocoa was a very important product for the Maya. In its first use it was used as currency, and then it was used for a variety of things.

Guatemala has around 33 volcanoes that extend throughout the highlands of the country. That is why it has the highest point in Guatemala is the Tajumulco volcano, which is also the highest volcano in all of Central America. It is 4,222 meters high and is without any volcanic activity, that is, it is a dead volcano that is why it can be climbed to reach its peak and enjoy one of the best views of the country.

Agriculture is an important part of the country, as it contributes a quarter of the gross domestic product. In its wide variety of products grown in the country, it is well known for its coffee, banana and sugar crops, which are the main products.