Apia is the capital city of Samoa , located on the island of Upolu , a territory surrounded by villages with a special charm and beautiful landscapes of mountains, valleys and beaches, which give it a calm and cozy appearance.

Highlights include the Samoa Parliament, the National Museum and the Apia Observatory, as well as beautiful parks such as the Apia Park and the Paolo Marine Park, which is located on Beach Road. In Vailima the visitor will be able to see the place where Robert Louis Stevenson , the author of ” Treasure Island ” resided .

The most spectacular beaches are the Aleipata District . Other natural places of great beauty are the Cataratas de Tiavi and the Cataratas Fuipisia , besides the National Park or Le Pupu-pu’e, that counts on a dense tropical vegetation. The traveler can approach to other islands that make up the State of Samoa . 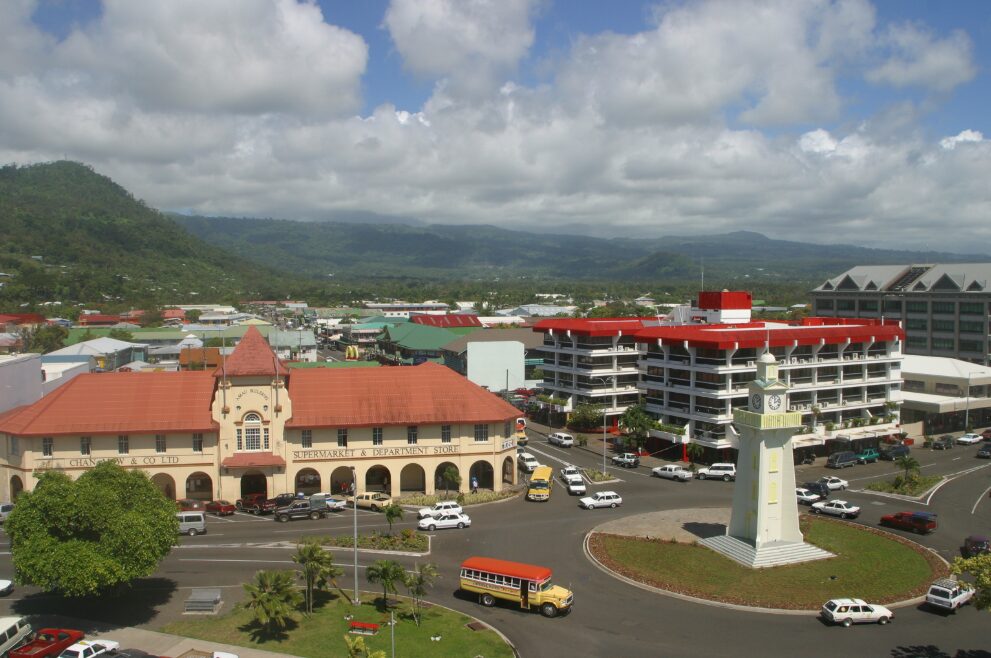 History
In its beginnings Apia was a small town, from which it took its name. The small town still exists within the modern capital, which has become an expanding urban area with many villages. Like any other village in the country, the village of Apia has its own leaders
and usual greetings.

The new capital, Apia, was founded in the 1850s and has been the official capital of Samoa since 1959 .

Do you want to know about capital city of St. Kitts and Nevis?

The port was the place where the 15 of March 1889 there was a naval confrontation in which seven ships of Germany , the USA And Britain refused to leave the port, so as not to lose dignity as a typhoon approached. All the ships sank, except for the British cruiser Calliope, who barely managed to leave port at 1 mile per hour and escape the storm. Nearly 200 Americans and Germans were killed, and six ships were sunk or unable to repair.

During the country’s struggle for political independence in the 1900s, organized in the national Mau movement, the streets of Apia became the scene of non-violent protests and marches where many Samoans were arrested. In what became known as “Black Saturday”, one of those peaceful Mau mobilizations in the city resulted in the death of Supreme Leader Tupua Tamasese Lealofi III by New Zealand police on December 28, 1929 . 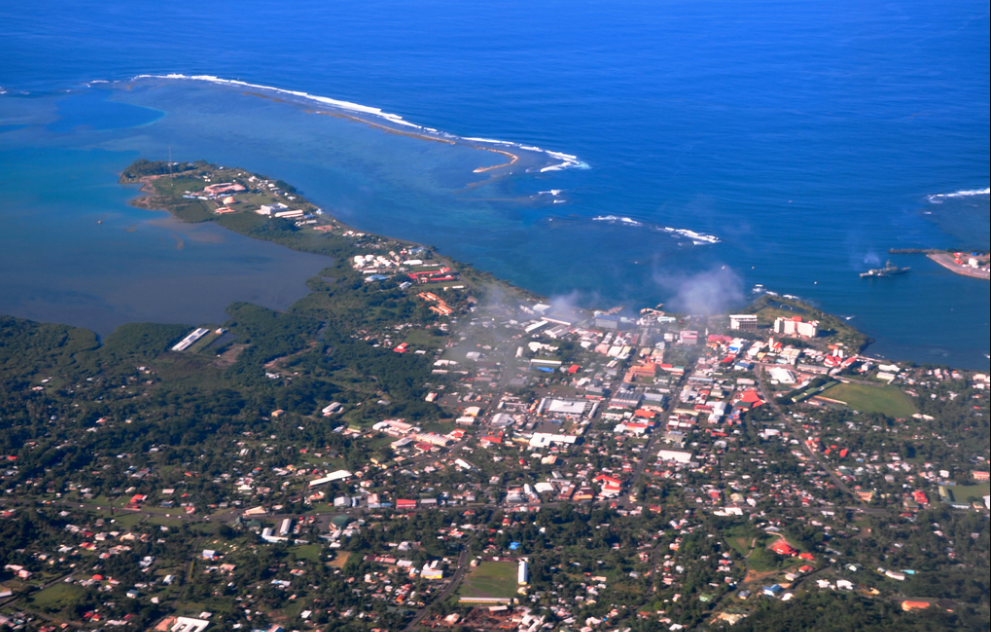 Apia is the capital of Samoa , and is located in the northern part of the island of Upulu, the second largest in the Samoa archipelago, which is also formed by the islands of Sabai’i, Monono and Apolima, plus five uninhabited islets. The city is located in a natural harbor at the mouth of the river Vaisigano .
Upolu Island is characterized by its territory is full of mountains not very steep. The capital Apia is surrounded by hills and valleys and is nestled on a narrow coastal plain with Mount Vaea. Two main mountain ranges run south on both sides of the river Vaisigano,
with roads in each. The most westerly of them is Cross Island Road, one of the few cutting roads from north to south through the center of the south coast island of Upolu.

The climate of Apia is tropical humid and the average annual temperature is 26º, with very little variation around this point. Between the months of December and March the rainy season takes place. The driest months are July and August.

The Falls of Tiavi, with more than 100 meters of height, and the Falls Fuipisia are spectacular. The National Park O Pupu-pu’e, with a dense tropical vegetation, is between the Fito and Lepu’e mountains. Within the city, the parks of Apia and Marino Paolo stand out. 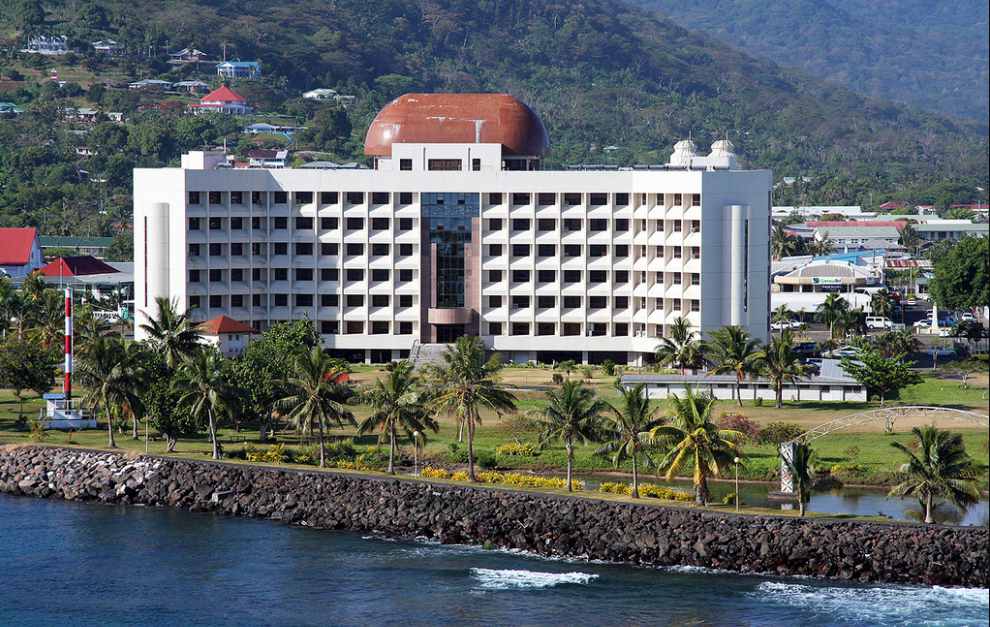 Apia has an approximate population of 38,800 inhabitants

n Samoa in general and in Apia in particular the main economic sectors are the export of cocoa , copra extraction , timber industry and handicrafts .

One of the main attractions of Apia is its beaches and the most spectacular are those of the District of Aleipata. But in addition to its natural charms, the capital of Western Samoa has numerous tourist attractions. On Beach Street, visitors will find numerous places to have fun. The Samoa Parliament, the National Museum and the Apia Observatory are three of the most important tourist spots in the city. In addition the visitor can take pleasant walks through any of its parks, although the most beautiful are the Park of Apia and the Marino Paolo. And for lovers of literature, you can still visit the residence of famous writer Robert Louis Stevenson, author of ‘ Treasure Island ‘.
Social development
Culture and art

The traditional culture of the area is based on oral tradition. Samoa has been a source of inspiration for writers and filmmakers. The most important literary that resided in the capital was Robert Loius Stevenson, whose mansion is now a museum on its figure and work.
The most notable building in Apia is the Parliament of Samoa, built in 1972. Next to the National Museum is the monument to Independence.

You can buy local handicrafts in the market of the city. The list of products is wide: from traditional costumes to fabrics, baskets and wood carvings , through bags and hats.

The inhabitants of Apia celebrate the New Year on the 2nd of April , since January 1 is reserved to commemorate independence. In addition to other Christian holidays, the Day of the Tree and National Women’s Day are celebrated .

Apia is home to many pre-school, primary, secondary and post-secondary educational institutions, with the only university in the country, the National University of Samoa. Also, the School of Agriculture of the University of the South Pacific owns a campus in
Alafua , on the outskirts of Apia.