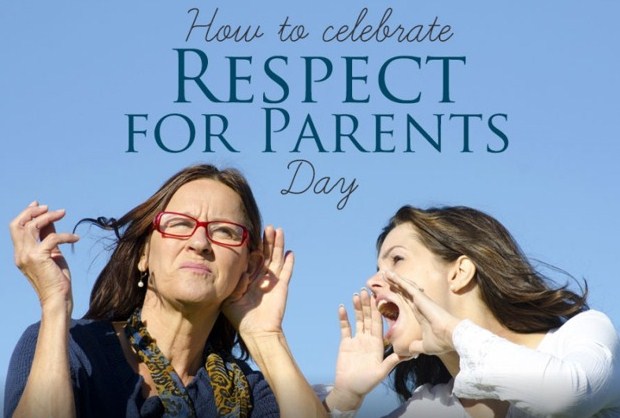 1 Aug 2017 is the respect for parents day. Today we are celebrating the Respect for Parents Day. The day of respect for parents day aims not only for children to recognize and appreciate the work of parents, who decide to have children and raise them. Governors, politicians and entrepreneurs should join in this recognition by making changes that allow parents the flexibility fulfill their parenting role.

All society and not only children should remember that parents deserve respect.

Marilyn Dalrymple, author of the book it’s Tough Growing Up, is the one who started the petition so that the first day of August of every year, will be officially recognized by the government as the day to respect the parents.

Talk to your children about this request, maybe they will have their own idea of ​​how to respect for parents day.

Language is the main form of communication and also the first level where relationships between people are established. Addressing a person with stealth, contempt, bad words or aggressive language shows disrespect, but doing it to parents also implies breaking a proper climate that favors good relationships.

Talking is used to establish contact, give or receive information, express feelings, convey what we think and establish appropriate links. Poor communication impairs the establishment of roles. In addition, the demonstration of respect in speaking contributes to laying the foundation of the relationship for those times when children and parents disagree. That is why it is important that children learn to communicate in an appropriate way.

Today, when there is an alarming increase in the physical and psychological abuse of children to their parents, the lack of verbal consideration goes unnoticed, but it is just as important.

Between authoritarianism and the excessive distance that existed in previous generations towards parents, and the current lack of consideration with which many children treat adults today, there is a great difference and as in everything, in the middle is virtue . You do not have to try to recover the “you” treatment, but also not to fall into excessive “colegueo”, much less let a child despise words or insult their parents.

Language is one more manifestation of the loss of manners of today’s young people. It is common to hear that children no longer have respect for the elderly, who respond badly to parents and teachers, who do not even listen to them, who “pass” from what they say, who respond roughly and in many cases respond with Screaming or aggression.