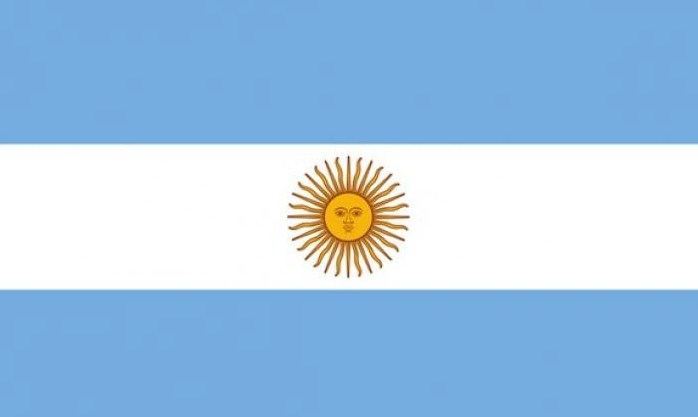 The national flag of Argentina has three horizontal stripes; the upper and lower are blue in color, and the central one is white. The meaning of the colors of the Argentine flag is under discussion. Some say that white represents silver. The first conquerors of the country called Argentina from the Latin word argentinum, which means silver, thinking that the region contained large quantities of this precious metal. The blue stripes can represent the sky and the waters, or the blue used by the Spanish House of Bourbon in its coat of arms.

The current national flag of Argentina is based on the flag created by Manuel Belgrano, who designed it with the colors of the national, celestial and white cockade, and that it first hoisted in the city of Rosario the 27 of February Of 1812 to use it in the army of its control (which was disallowed by the government).

The national flag of Argentina is a national symbol of the Argentine Republic. It is the most recognized emblem of this country at the international level.

National Flag of ArgentinaIt is composed of three horizontal stripes of equal size, being of celestial color the upper and lower strips, and white the central strip. In the center of the white strip there is a sun with a human face. It has a width to length ratio of 9 to 14.

The current Argentine flag is based on the one designed by Manuel Belgrano from the colors of the Argentine national rosette, which was celestial and white. It was raised for the first time in the city of Rosario, the 27 of February of 1812.

In Argentina, the Day of the Flag was defined as the day of the death of Manuel Belgrano, on July 20, as a commemoration of the hero, who died in 1820.

Do you know about National Flag of Andorra ?

Likewise, blue and white were the colors that identified the Royal and Distinguished Spanish Order Carlos III, the most appreciated by the Bourbons, which also has an image of the Virgin Mary in her invocation of the Immaculate Conception.

In this sense, Domingo Faustino Sarmiento indicates that the election of these colors actually indicated the sovereignty of the Spanish Crown over the South American nation, whose king had been deposed by Napoleon. So, on May 25, these colors had been taken to show that the Argentines took their sovereignty from the king himself.

Meaning of the sun

In the center of the white stripe of the flag is a sun with a human face known as the May sun, Inca sun or sun war. It was added to the flag in 1818 by Juan Martin Pueyrredon, at last, supreme director of the United Provinces of the River of the Silver.

The sun represents the May Revolution, which took place in the city of Buenos Aires on May 25, 1810, the day when the process of independence of the Viceroyalty of the Rio of Plata of Spain began. It also represents Inti, the Inca god of the sun. Hence it is a human face with a serene expression.

This sun is of golden yellow color, with thirty-two rays, sixteen of which point clockwise, while the remaining sixteen are straight, being that all are arranged around the figure of the sun in an alternative way.

Prior to 1985, the flag with the sun was only used by the military and official institutions, but from then on it also had a civilian use.